The SS Marine Sulphur Queen, was originally an oil tanker utilized in World War II that was converted to carry molten sulfur. The 524-foot ship disappeared off the coast of Florida taking with her the lives of 39 crew members.

The vessel, originally named SS Esso New Haven, was built by Sun Shipbuilding and Dry Dock Company in Chester, Pennsylvania in March 1944. It was just one of many T2 tankers built to carry and transport oil. In 1960, she was placed in dry dock, converted to carrying a cargo of molten sulfur, and rechristened the Marine Sulphur Queen.

The ship’s last voyage began on February 2, 1963, out of Beaumont, Texas, with a cargo of sulfur weighing 15,260 tons, destined for Norfolk, Virginia. On February 4, near Florida, an ordinary radio message was sent by a crewman, giving the ships’ position. That was the last report made by the Marine Sulphur Queen. The ship was listed as missing two days later and a search for the vessel and her 39 crew members was begun. The Marine Sulphur Queen was thought to have gone down somewhere in the Straits of Florida and though the search continued for 19 days, only a few life preservers and some debris was ever found.

The Coast Guard immediately launched an investigation that primarily questioned the seaworthiness of the ship, going so far as to the state that its condition should have prevented her from going to sea at all.

One of the most severe of the problems discovered was that the ship had a history of fires beneath and along the sides of the four large sulfur tanks. In fact, according to former crewmen, these fires were so common that ship’s officers gave up sounding the fire alarm. It was also found that the T2 tanker class had a characteristic “weak back”, meaning the keel would split at a point weakened by corrosion. Such a splitting had happened on several other T2 tankers. All in all, the reasons for its loss was determined to have been caused by the ship’s poor design and the lack of maintenance. One former crew member was noted as calling the ship “a floating garbage can.” This was reinforced by several crewmen who reported that corrosion was everywhere causing inoperable equipment. Interestingly, the Marine Sulphur Queen had been scheduled for a drydock inspection in January 1963, but it was postponed by the owners, who had complained that cargo deliveries were running behind and they needed their ships to catch up. In the end, the Coast Guard recommended that no remaining T2 tankers be converted to sulfur carriers.

This would result in lengthy litigation between the ship’s owners and the families of the missing men.

The SS Poet – Victim of the Atlantic

Initially built as a transport ship for the US Navy in 1944, she transported troops during World War II regularly until 1949. Afterward, she was idle for two decades before being sold and changing hands several times. In 1979, she was purchased by the Hawaiian Eugenia Corp and the 522-foot ship was converted to a bulk cargo carrier.

On October 24, 1980, the Poet left Girard Point in Philadelphia, Pennsylvania early in the morning carrying 13,500 tons of corn and crew of 34. Bound for Port Said, Egypt, the captain reported that the ship was heavy on the bow and was slow in responding, but apparently these issues were of little concern as the green light signal was given to the ship and it began cruising through the Delaware River towards the Atlantic. A short time later, the ship reported its position at 8:30 a.m. when it passed by Cape Henlopen, Delaware. It would be the last transmission received from the Poet.

Though the ship was required to report its position every two days to the Marine Administration, it failed to do so and for whatever reason, the ship owners didn’t report her missing until November 3, 1980. Had the ship stayed on course she would have reached Egypt by that time. Unfortunately, the delay in reporting the Poet missing made the search for her much more difficult. However, a massive search operation was initiated by the US Coast Guard that covered some 290,000 square miles starting from Cape Henlopen all the way to the Straits of Gibraltar. In addition, nine planes did an aerial search of some 393,000 square miles. In the end, no trace of the ship, the 34-member crew, nor any debris or oil leakage was found.

A Marine Board investigation was initiated to try to determine what had happened to the ship, but no specific conclusion was determined. However, several facts were uncovered that may have had something to do with her appearance.

On October 26th, there was a short auto alarm received at the radio control tower in Baltimore, Maryland. It was so short, that it could not be determined that it came from the Poet, but if it did, the location indicated the ship was in the midst of the Bermuda Triangle, at the edge of Sargasso Sea.

An inspection of the ship was made by the Coast Guard before leaving Philadelphia. Though the inspection found some issues, they were not considered risky enough to stop her from going to sea. One problem was that a couple of large oil containers did not have padding under them making them susceptible to sparks. The hatch of one of the cargo holders was found to be defective, which could have caused it to give way and the hold to flood. However, the defect was not considered a real threat as it had been that way for some time. The ship was not carrying a Loran navigational system, but, it is unlikely that this was a problem as the veteran captain had 41 years of experience and had traveled the route multiple times. Lastly, the ship was listing slightly before it departed, however, this imbalance could be corrected by shifting barrels of fuel.

On October 25th a freak storm with 30-foot high seas and high winds gusting up to 60 knots occurred in the North Atlantic. Though the Poet had survived worse in the past, might she have succumbed to this storm?

The final Maritime Report produced by the Coast Guard mentioned that likely the Poet was lost between October 25th and 26th when it faced the worst weather conditions.

It was the first U.S. vessel to have disappeared in many years. 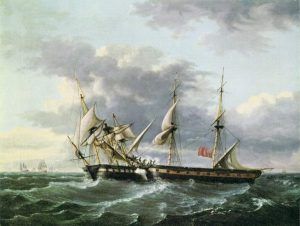 The fast-moving ship with a square sail, 22 guns, and a crew of around 170, she carried out two successful raiding voyages against British trade during the summer of 1814, in the course of which she fought and defeated three British warships. In total the Waspfought 13 successful engagements and was a valuable asset to the United States Navy.

Then, on September 22, 1814, she captured the British merchant brig Atalanta. Usually, the Wasp’s crew would simply burn enemy ships, but the Atalanta was deemed much too valuable to destroy (it may have helped that the Atalanta was a prize won back for the US — she had previously been an American ship called the Siro). Instead, a crew was dispatched to bring her into a friendly harbor. After the Atalanta departed, Master Commandant Johnston Blakeley and his remaining crew on sailed on, with a Swedish merchantman reportedly spotting the Wasp heading for the warm waters of the Caribbean. After that, she simply disappeared, never to be seen again. In all probability, she sank in a storm — but with no trace of the ship or crew was ever found.

The Witchcraft – An Unsinkable Luxury Yacht

On the night of December 22, 1967, experienced yachtsman and hotel owner, Dan Burack and his friend, Father Patrick Horgan, set sail in the 23-foot luxury cabin cruiser Witchcraft to see the Christmas lights off the coast of Miami, Florida. Unfortunately, just one mile offshore the yacht hit something below and at 9:00 p.m. Burack calmly called the Miami Coast Guard to report the trouble and request assistance. The official who took the call later commented that Burack seemed unconcerned and he had every reason to be, as his ship was “unsinkable”, or so he thought. The yacht was fitted with a special hull to keep her from sinking and it was equipped with all manner of life-saving gear on board. Burack had given his specific location and promised to fire flares when he sighted the Coast Guard.

Just 19 minutes after Burack had made the call, the Coast Guard arrived at the scene and were surprised to find no trace of the large yacht, no debris, and no sign of Burack or Horgan.

Over the next six days, hundreds of square miles of ocean were searched, including northward to the Gulf Stream in case the ship had been pulled out by a brief squall. After searching over 24,500 square miles, nothing was found of the men or the yacht.  The Coast Guard even notified the private vessels up to 50 miles away to look out for any debris. Still, nothing was found.

No explanation has ever has been given for Witchcraft’s sudden disappearance. Seemingly, this was yet one more vessel that succumbed to the mysterious Bermuda Triangle.