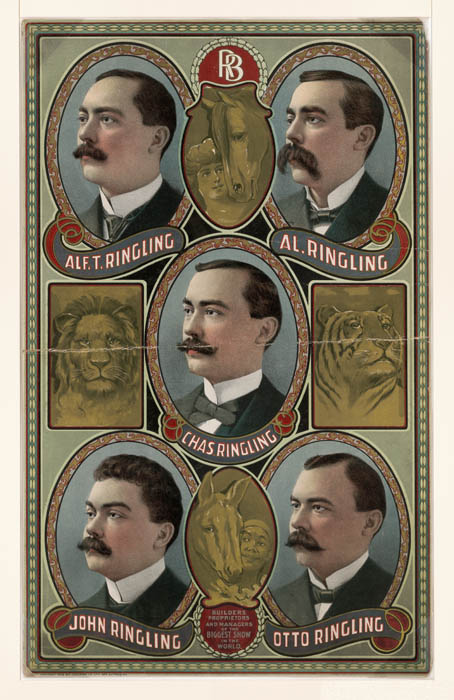 The children were raised in Baraboo, Wisconsin where the five brothers formed the “Classic and Comic Concert Co.” in 1882. The song-and-dance troupe went on the road for two seasons before they started adding novelty acts and purchased the Yankee Robinson Circus. The brothers opened their first one-ring circus in Baraboo on May 19, 1884. At the end of the season, they added a trick horse and a bear.

The troupe continued to grow slowly and in 1888, the brothers purchased their first elephant and before long their little circus began to thrive, as mid-westerners flocked to see the giant animal.

During these first years, the brothers were traveling with circus wagons, loading their animals, equipment, and supplies into the slow-moving vehicles. However, in 1890, they began to load their circus wagons onto railroad cars, enabling them to make longer tours and expand their operations. 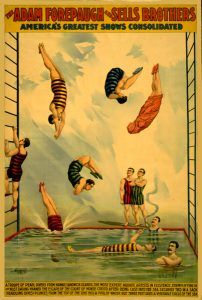 By 1900 the Ringling Brothers were actively rivaling the Barnum & Bailey Circus, and the brothers began to buy up other circuses to hedge the competition. They acquired the Forepaugh-Sells Circus in 1906, and, after James Anthony Bailey’s death in 1906, they bought the Barnum & Bailey Circus in October 1907 for $400,000, running each circus separately for several years. However, in 1919, due to wartime conditions that included labor shortages and rail travel problems, the Ringling’s merged the two great entities. The new circus opened on March 29 in New York City and was called “Ringling Bros. and Barnum & Bailey Combined Shows”. The result, consisting of 100 double-length railroad cars and 1,200 employees, was arguably the largest traveling amusement enterprise up to that time.

In 1926, Charles E. Ringling died, leaving just John (the other brothers had already passed) to run the business, which continued to flourish through the Roaring Twenties. In 1927, John Ringling moved the circus headquarters to Sarasota, Florida. Two years later, in 1929, he purchased the American Circus Corporation, of Peru, Indiana. The sale included five large circuses and a contract to perform in New York City. The purchase price was $1.7 million. The Ringling Brothers and Barnum & Bailey Circus had a main-tent seating capacity of 10,000.

By this time, the Ringling brothers were among the most famous American entrepreneurs, were the largest circus in the United States, and were known throughout the world. Unfortunately, John Ringling’s health began to fail and with the Great Depression, so did the business, dealing a severe blow to both the circus and to Ringling, personally.

His wife, Mable, died in June 1929 and he remarried a year later to Emily Haag. In 1932, he was voted out of control of the business and a new manager was appointed. Four years later, he was divorced from his second wife on June 6, 1936, and just months later, he would pass on December 2, 1936. He was the last Ringling brother to die and the only one to reach their 70’s. Once one of the world’s wealthiest men, he died with only $311 in the bank and willed his Sarasota mansion and art collection to the state of Florida. Today it is the John and Mable Ringling Museum of Art. 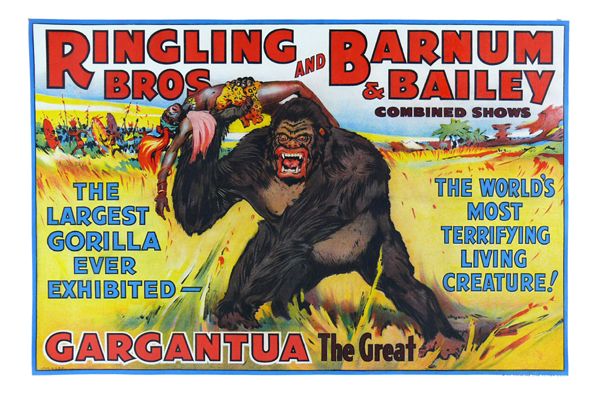 After his death, the circus was operated by his nephew, John Ringling North (his sister’s son) and though the circus suffered during the 1930s due to the Depression, it managed to stay in business.

In 1938, well-known animal hunter/trapper, writer, and movie actor Frank Buck became the feature attraction of the circus. That same year Ringling’s introduced Gargantua the gorilla who Frank Buck introduced as “The World’s Most Terrifying Living Creature!”

The years during World War II were difficult times for the nation and for circuses also. Many circus personal were now fighting for our country in Europe or in Asia. The rail system was needed to transport troops and equipment. President Roosevelt, knowing that the country needed entertainment and diversion from the war to boost morale, granted special dispensation for circuses to move by train.

North’s cousin Robert took over the circus presidency in 1943. 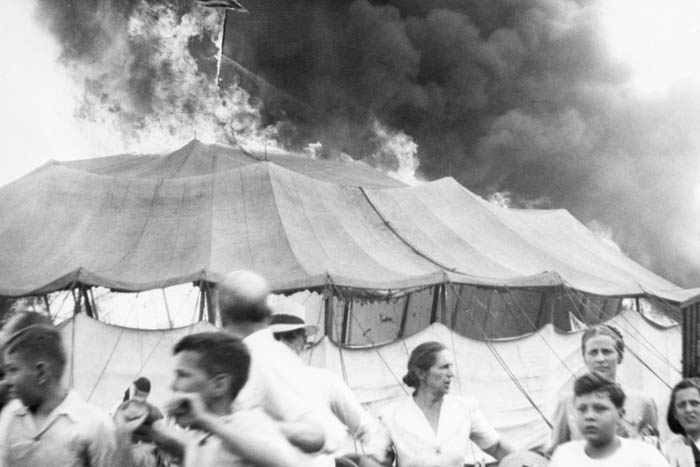 In 1944, one of the worst tragedies of the business took place in what became known as the Hartford Circus Fire. Occurring during an afternoon performance on July 6, 1944, in Hartford, Connecticut, there were approximately 7,500 to 8,700 people in attendance. One of the worst fire disasters in the history of the United States, at least 167 people were killed and 700 more were injured. Some of the dead remain unidentified to this day.

Although the Hartford Fire Department responded quickly, the fire was fanned by the fact that the canvas circus tent had been waterproofed through a mixture of highly flammable paraffin and gasoline. In the investigation that followed, it was discovered that the tent had not been fireproofed. The company had applied to the Army, which had control over the fireproofing material for enough to treat their big top, and their request had been denied. In the end, circus management was found to be negligent and several Ringling executives served sentences in jail. The company was forced to set aside all profits for the next ten years to pay the claims.

Unfortunately, the prosperity that was enjoyed by the nation following World War II was not shared by the circus crowds, which dwindled as costs increased. John Ringling North resumed the presidency of the circus in 1947, but public tastes, influenced by the movies and television, had abandoned the circus. 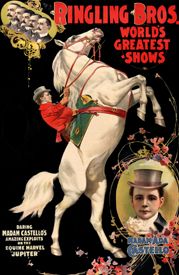 In 1951 the movie “The Greatest Show on Earth” was filmed starring the Ringling Brothers and Barnum & Bailey Circus.

In 1956, the company gave up its tent shows and began to perform only in indoor buildings that provided adequate seating. Ringling Brothers gave its last performance under the big top in Pittsburgh, Pennsylvania on July 16, 1956, prompting Life Magazine to report that “a magical era had passed forever”.

In late 1967, Irvin Feld, Israel Feld, and Judge Roy Mark Hofheinz of Texas, together with backing from Richard C. Blum, the founder of Blum Capital, bought the company outright from North and the Ringling family interests for $8 million. Irving Feld immediately began making changes to improve the quality and profitability of the show, including eliminating the freak shows, eliminating some of the more routine acts, and becoming more family orientated. An astute promoter, he also utilized national advertising campaigns, national television specials, and creative public relations, thus bringing the once-declining Ringling Bros. back to its rightful place as a premier American art form.

In 1968, the Feld’s established the Ringling Bros. and Barnum & Bailey Clown College to rejuvenate the profession of clowning and purchased a circus in Europe just to have its star animal trainer, Gunther Gebel-Williams, for the core of his revamped circus. The clown college operated at the Sarasota Opera House until 1998 before the program was suspended.

The company was taken public in 1969 and the following year Irvin Feld’s only son Kenneth joined the company, learning the craft of production from his father. 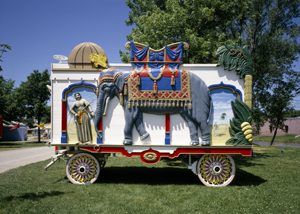 In 1971, the Feld’s and Hofheinz sold the circus to Mattel for $40 million, but the Feld family was retained as management. In 1982, the Feld company bought the circus back from Mattel. After the death of Irvin Feld in 1984, the circus became part of Feld Entertainment, an international entertainment firm headed by Kenneth Feld, with its headquarters in Ellenton, Florida.

Nicole Feld became the first female producer of Ringling Circus in 2004. In 2009, Nicole and Alana Feld co-produced the circus. On March 5, 2015, the Circus announced that all elephants would be retired in 2018. The retirement date was subsequently moved forward to May 2016. For years, the elephants had been in the spotlight and their dance routines featured prominently in the shows. But due to mounting criticism from animal rights groups, the Ringling Bros. phased out the elephant acts entirely.

On January 14, 2017, it was announced that the circus would be closed in May. Declining attendance combined with high operating costs were among the reasons for closing. The circus’s last performance was at Nassau Veterans Memorial Coliseum on May 21, 2017.

After 133 years, the Greatest Show on Earth passed into history. But, she will be remembered in two museums – The Circus World Museum in Baraboo, Wisconsin, the hometown of the Ringling Brothers, and the Ringling Museum of the Circus in Sarasota, Florida. 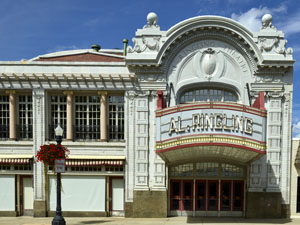 The Al. Ringling Theatre in downtown Baraboo, Wisconsin, the longtime home to the Circus World Museum, the former headquarters and winter home of the Ringling Brothers circus. Photo by Carol Highsmith.