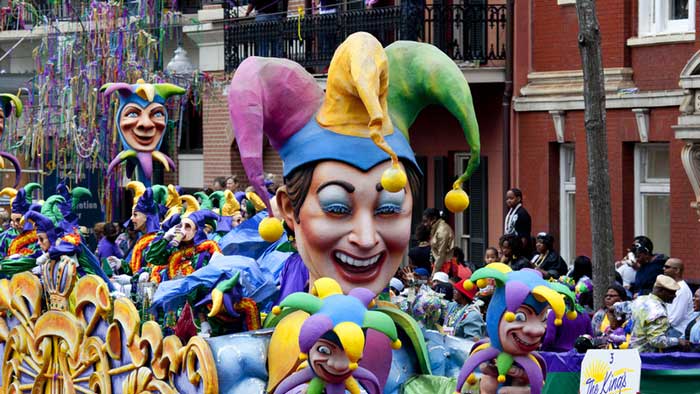 Also called Shrove Tuesday or Fat Tuesday, Mardi Gras refers to events of the Carnival celebrations, beginning on or after the Christian feasts of the Epiphany (Three Kings Day) on January 6th and culminating on the day before Ash Wednesday. Mardi Gras is French for “Fat Tuesday,” reflecting the practice of the last night of eating richer, fatty foods before the ritual fasting of Lent, the 40 days of penance between Ash Wednesday and Easter Sunday.

The celebration and Christian holiday dates back thousands of years to pagan celebrations of spring and fertility. Though it was a pagan ritual, Christian religious leaders incorporated these popular local traditions into the new faith when Christianity arrived in Rome. From Rome, the tradition spread along with Christianity, to Venice, Italy to France, and soon, all over Europe. And, as Europeans began to colonize other continents, their traditions followed them.

Staying a few days in Lake Charles, LA, we learned that the city has the 2nd largest Mardi Gras celebration in the United States. So we paid a visit to the Mardi Gras Museum of Imperial Calcasieu and talked to Docent and Curator David Faulk.

Traditionally, in the days leading up to Lent, parishioners were required to fast for periods or abstain from certain types of food, most commonly red meat. Practices varied from giving up all animal products, to permitting only bread, to eating only once per day, etc. In ancient times, in the days leading up to Lent, many would binge on the soon-to-be forbidden foods, leading to the term “Fat Tuesday.” The word “carnival,” may also be related to pre-Lent festivities as in Medieval Latin, “carnelevarium” means to take away or remove meat.

Fasting during Lent was more prominent in history as it is today, as most people give up something for Lent, not necessarily food-related.

The expedition entered the mouth of the Mississippi River on March 2, 1699, and proceeded upstream to a place on the east bank about 60 miles downriver from where New Orleans is today. The next day was Mardi Gras, so they named the place Point du Mardi Gras. The group went on to found Fort Louis de la Louisiana (Fort Conde) in 1702 and the settlement that grew up around it — Fort Louis de la Mobile (Mobile, Alabama) became the first capital of French Louisiana. The following year, the settlers established the first organized Mardi Gras celebration tradition in what was to become the United States. In 1711, French settlers in Mobile organized the first informal mystic society, or krewe, called the Boeuf Gras Society and organized song, food, and dance for the festivities as well as a Papiér-maché bull that was pulled down Dauphin Street in what is believed to have been the first carnival “parade” in North America.

By 1720, Biloxi had been made the capital of Louisiana and the French Mardi Gras customs followed.

New Orleans was founded by Bienville in 1718 and the capitol of Louisiana Territory was moved there in 1723. By the 1730s, Mardi Gras was celebrated openly in New Orleans. In the early 1740s Louisiana’s governor, the Marquis de Vaudreuil, established elegant society balls, which became the model for the New Orleans Mardi Gras balls of today. The earliest reference to Mardi Gras “Carnival” appears in 1781 and that same year the Perseverance Benevolent & Mutual Aid Association was the first of hundreds of clubs and carnival organizations formed in New Orleans. Soon, Mardi Gras became synonymous with the city in popular perception. 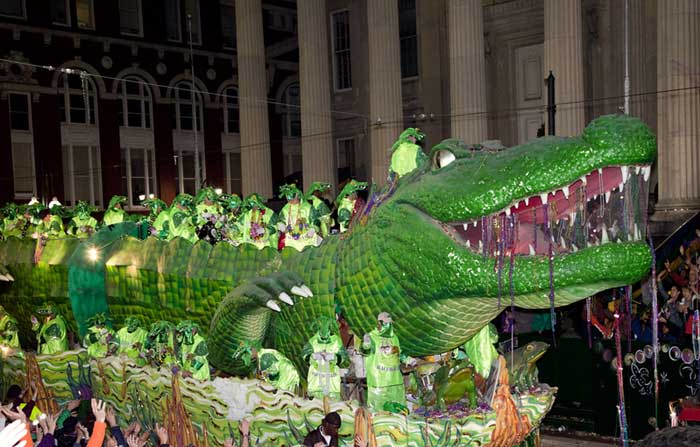 By the late 1830s, New Orleans held street processions of maskers with carriages and horseback riders, led by dazzling gaslight torches, or “flambeaux”. In 1837, the first recorded New Orleans Mardi Gras parade took place, a tradition that continues to this day. In 1856 the first krewe was formed in New Orleans – the Mistick Krewe of Comus, which brought magic and mystery to New Orleans with dazzling floats and masked balls. A krewe is an organization that puts on a parade or ball for the Carnival season. In 1870, Mardi Gras’ second Krewe, the Twelfth Night Revelers, was formed.

In 1872, a group of businessmen invented a King of Carnival, Rex, to preside over the first daytime parade and also adopted the colors of purple, green and gold as the Carnival’s official colors. Purple stands for justice; gold for power; and green for faith. In 1875, Louisiana’s governor made Fat Tuesday a legal holiday in Louisiana. Today, Louisiana is the only state where Mardi Gras is an official holiday.

In the decades that followed, New Orleans and other French settlements began marking the holiday with street parties, masked balls, and lavish dinners. Other lasting customs include throwing beads and other trinkets, wearing masks, decorating floats and eating King Cake. 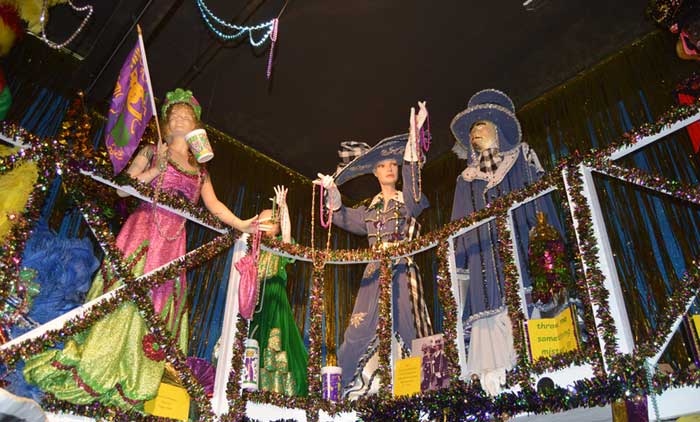 The festival season varies from city to city, as some traditions, such as the one in New Orleans, Louisiana, consider Mardi Gras to stretch the entire period from Twelfth Night (the last night of Christmas which begins Epiphany) to Ash Wednesday. Others treat the final three-day period before Ash Wednesday as the Mardi Gras. Carnival is an important celebration in the United Kingdom and Ireland — the week before Ash Wednesday is called “Shrovetide”, ending on Shrove Tuesday.

Around the world, Venice, Italy; Rio de Janeiro, Brazil; Quebec City, Canada, and New Orleans, Louisiana hosts some of the most famous public festivities, drawing thousands of people every year.

Other cities along the Gulf Coast with early French colonial heritage also celebrate the Carnival season including Pensacola, Florida; Galveston, Texas; Lake Charles and Lafayette, Louisiana. Other US cities that celebrate Mardi Gras include Natchez, Mississippi, Mobile, Alabama, St. Louis, Missouri, San Diego, California, and La Crosse, Wisconsin. Each city has its own events and traditions. Lake Charles, Louisiana is said to have the 2nd largest Mardi Gras celebration in the United States.