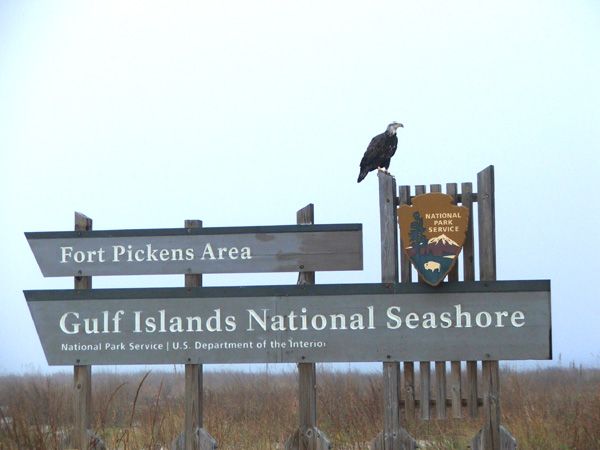 From our 2017 adventure along the Gulf Coast…

Stretching for miles along the southern coasts of Mississippi, Alabama, and the northwestern corner of Florida, Gulf Islands National Seashore helps tell the story of the development of the United States as an independent nation. The area included within the National Seashore was important in the creation and protection of the southern United States after a series of occupations by the Spanish and British. Visitors will find an array of impressive military heritage sites within the park that reflect the pivotal role of fortresses in seizing control of the region. Gulf Islands National Seashore also offers a wide variety of exciting recreational possibilities including swimming, boating, fishing, and camping.

Between the 1500s and the 1800s, the area where Gulf Islands National Seashore is located came under the Spanish, then the British, the Spanish again, and finally the United States. The sites to see in the park further evolved during the Civil War and many remained in military service through World War II. Exhibits and tours feature and interpret not only military history but also the area’s heritage as linked to the Apache, Latino culture, slavery, shipbuilding, and the coastal environment. There is much to see and do at the many units of the park to learn about the history of the region and the nation.

Around Pensacola, links to Latino heritage are especially strong. The Spanish first came to the area in the 1500s as one of the colonizing powers that ruled Florida. Because the Spanish originally regarded Pensacola as a simple military outpost, Spain only sent basic necessities to support its troops, including slaves and workmen, to build a military presence on the west coast of Florida to protect the strategic Pensacola Bay. In 1698, the Spanish constructed the first fort in this area, Fort San Carlos de Austria; however, the French completely destroyed it in 1719. The rivalry between European powers in this area led to the repeated destruction and rebuilding of fortresses.

From 1763 to 1781, the British controlled Pensacola and built the Royal Navy Redoubt, a five-faced battery made from earth and logs. In 1781, the Spanish regained control of Pensacola, which marked the beginning of the last period of Spanish rule in the area. In 1797, the Spanish constructed the Bateria de San Antonio, a masonry water battery, and Fort San Carlos de Barrancas, which was a replacement for the fort the Spanish built during their first occupation.

Andrew Jackson moved into Pensacola in 1814, in response to Spanish-British collaboration during the War of 1812. The British immediately burned down the fort and retreated from the area. The Spanish attempted to rebuild their fort but eventually surrendered. Thus, Jackson seized control of West Florida and the fort for the United States in 1821. 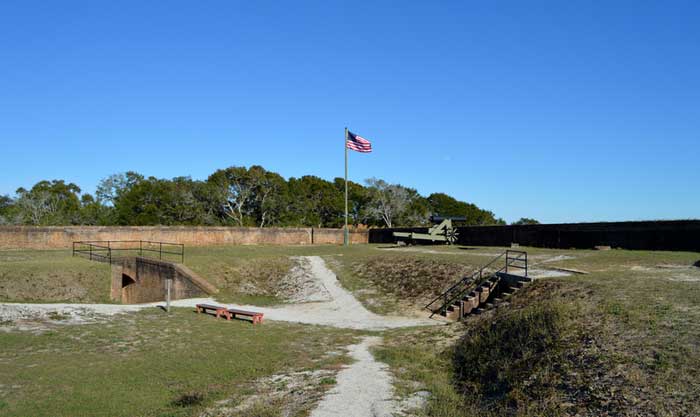 Today, visitors can see this legacy in Fort Barrancas and its associated structures. The original Spanish-built fort has been highly altered over time, but the colonial-era Bateria de San Antonio, also known as the Water Battery, that dates from 1797 is still partially visible. US troops overtook it in 1834 and then used it during the Civil War. American engineers remodeled the Water Battery in 1840 and built the current brickwork Fort Barrancas on the bluff between 1839 and 1844, connecting it to the Water Battery by a tunnel. The United States deactivated Fort Barrancas on April 15, 1947. After being restored, the fort opened to the public in 1980.

Spain was the first European nation to gain a foothold in this region of the New World but other powers followed. The conflicts that marked the settlement at Pensacola were mostly between colonizing forces, but American Indian groups living in the area were also severely affected. Beyond the struggles of imperialism, successive waves of colonizers encountered American Indian tribes such as the Apache and, later, the Seminole. Relations between the colonists and Indians were not always peaceful, and by the time of the Spanish surrendered Florida to the British in 1763, foreign disease (like the notorious yellow fever) had devastated many of the Indians. Those who survived fled to Cuba with the Spanish. The Seminole, who began moving into the area in the mid-1700s, clashed with the new American settlers, and few tribe members remained by the turn of the next century.

Meanwhile, the area around the original Spanish Fort Barrancas continued to be important in the nation’s coastal defense and the protection of Pensacola. Completed nearby in 1834, Fort Pickens played a defensive role as a Union stronghold against nearby Confederate forces at Fort McRee and Fort Barrancas during the Civil War. Fort Pickens is the largest of the four forts built in the area to protect Pensacola. The Advanced Redoubt to the north was constructed between 1845 and 1870 to defend against an enemy attack from the land, unlike the other fortifications whose defensive artillery faced the sea. A trench line connected Advanced Redoubt and Fort Barrancas, protecting the navy yard to the east from infantry attacks.

Just west of Fort Pickens in Florida is Fort McRee. Constructed between 1834 and 1839, this fort now lies in ruins after heavy damage during the Civil War and natural erosion of the shoreline on which it sits. Despite this, the US military continued to build artillery batteries here for the defense of Perdido Key and the coastline, through World War II. In addition to the site of the former fort, ruins of these batteries are still visible both here and near Fort Pickens. 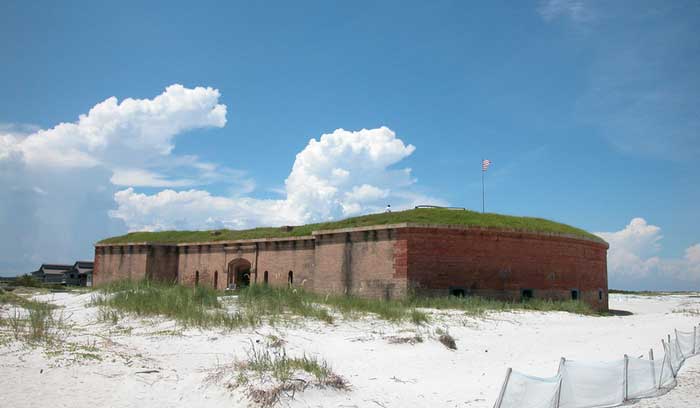 Fort Massachusetts on West Ship Island in Mississippi was also intended for national defense. Beginning in 1859, Americans rebuilt what had once been a French base in the early 1700s to protect the strategic deepwater harbor on the north side of the island. Storms, disease, climate, isolation and the Civil War made construction on the remote barrier island such a challenge that it halted entirely in 1866 before completion of the fort.

Visitors to the park can explore Fort Barrancas and its Advanced Redoubt, Fort Pickens, Fort McRee, and Fort Massachusetts through a variety of ranger-led tours, youth programming, and special events. Although few tangible remains at Gulf Island National Seashore mark their presence, it was the Spanish who first realized the strategic importance of western Florida and began the series of outposts that evolved over time to protect the coast of the United States.