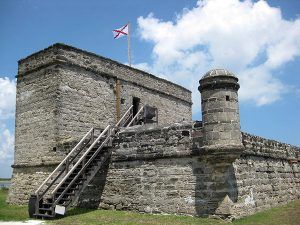 Fort Matanzas National Monument is a Spanish fortress built in 1742 to guard Matanzas Inlet, the southern mouth of the Matanzas River, which could be used as a rear entrance to the city of St. Augustine, Florida, some 15 miles to the north. At that time, coastal Florida was a major field of conflict as European nations fought for control in the New World.

Long before Europeans arrived, archaeological research tells us that at least 12,000 years ago, wandering hunter-gatherer people lived in the region following the great herds of mammoths and other large animals, as well as gathering the wild grains, nuts, and berries they found in their seasonal wanderings. No one knows what these people called themselves, but to archaeologists, they are known as Paleo-Indians.

As the large prey died out, these people began to exploit the vast water resources. Fish, shellfish, turtles, and alligators became a major part of their diet. Hollowed out log canoes enabled them to travel the many rivers. About 2500 years ago, as the various groups of archaic people began to become more settled in one place, each group began to develop a distinct regional culture while maintaining several customs in common. The people who lived along the St. Johns River in east-central and northeast Florida were known as the Timucuan.

The Massacre of the French 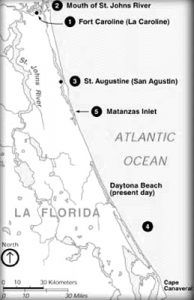 The Massacre of the French Huguenots, took place up at the Matanzas Inlet. The incident initiated Spanish control of Florida for 235 years and led to the naming of the Matanzas River (Matanzas, the Spanish word for “slaughters”).

When King Philip II of Spain learned that the Frenchman Rene de Laudonniére had established Fort Caroline in Florida, he was incensed, as the colony sat on land belonging to the Spanish crown. Spanish treasure fleets sailed along the Florida coast on their way to Spain and Fort Caroline provided a perfect base for French attacks. Worst of all to the devoutly Catholic Philip, the settlers were Huguenots (French Protestants). Despite Philip’s protests, Jean Ribault sailed from France in May 1565 with more than 600 soldiers and settlers to resupply Fort Caroline.

General Pedro Menéndez de Aviles, charged with removing the French, also sailed in May, arriving at the Saint Johns River in August with some 800 people, shortly after Ribault (2 on map). After a brief sea chase, the Spanish retired south to a site they had earlier reconnoitered, a Timucuan village called Seloy. The Spanish came ashore on September 8th and established and named their new village “St. Augustine” because the land had first been sighted on the Feast Day of St. Augustine, August 28. 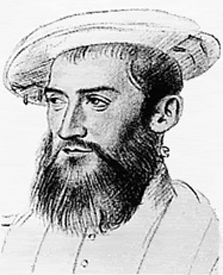 Jean Ribault sailed on September 10th to attack and wipe out the Spanish at St. Augustine, but a hurricane carried his ships far to the south, wrecking them on the Florida coast between present-day Daytona Beach and Cape Canaveral.

At the same time, Menéndez led a force to attack Fort Caroline. Since most of the soldiers were absent, Menéndez was easily able to capture the French settlement, killing most of the men in the battle. Some of the inhabitants, including Rene de Laudonniére and the artist Jacques LeMoyne, were able to escape to ships and return to France. Menéndez spared the women and children and sent them by ship to Havana.

He then learned from Timucuan Indians that a group of white men were on the beach a few miles south of St. Augustine. He marched with 70 soldiers to where an inlet had blocked 127 of the shipwrecked Frenchmen trying to get back to Fort Caroline (5 on map).

With a captured Frenchman as a translator, Menéndez described how Fort Caroline had been captured and urged the French to surrender. Rumors to the contrary, he made no promises as to sparing them. Having lost most of their food and weapons in the shipwreck, they did surrender. However, when Menéndez then demanded that they give up their Protestant faith and accept Catholicism, they refused. In the end,111 Frenchmen were killed. Only sixteen were spared – a few who professed to be Catholic, some impressed Breton sailors, and four artisans needed at St. Augustine.

Two weeks later, the sequence of events was repeated. More French survivors appeared at the inlet, including Jean Ribault. On October 12th, Ribault and his men surrendered and met their fate, again refusing to give up their faith. This time 134 were killed. From that time, the inlet was called Matanzas — meaning “slaughters” in Spanish. 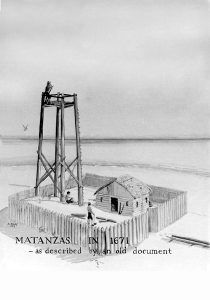 Wooden Watchtower on the Matanzas Inlet

As early as 1569 the Spanish recognized the vulnerability of the Matanzas Inlet and built a wooden watchtower and a thatched hut to house six soldiers who took turns scanning the horizon. If a ship was sighted, a runner or small boat set out to warn St. Augustine. Watching and warning were the tower’s tasks for it lacked any armament.

At least twice the watchtower kept pirates from coming in this “backdoor.” In 1683 English outlaws captured the watchtower, but, word made it to St. Augustine, and ships and soldiers came and drove them off. In 1686, French pirates attempted to come into the inlet, but again the news was sent to St. Augustine, and these pirates, too, were repulsed.

In Florida’s warm, wet climate, these wooden watchtowers often had to be rebuilt or replaced. No sign of any of the towers remains, but, archaeological evidence suggests that they may have been on Anastasia Island in the vicinity of the park’s visitor center.