Captain William Kidd is the most ubiquitous gentleman in history. If his earnings in the gentle craft of piracy were frugally kept, he possibly left some pots of money in holes in the ground between Key West, Florida, and Halifax, Nova Scotia. The belief that large deposits of gold were made at Gardiner’s Island, Dunderberg, Cro’ Nest, New York City, Coney Island, Ipswich, the marshes back of Boston, Cape Cod, Nantucket, Isles of Shoals, Money Island, Ocean Beach, the Bahamas, the Florida Keys, and elsewhere caused numerous reckless expenditures of actual wealth in the hopes of recovering doubloons and guineas. A hope of getting something for nothing was the impetus to these searches, and interest in the subject was now and then revived by reports of a discovery — usually by a farmer plowing near the shore — of an iron kettle with a handful of gold and silver coins in it, the same having doubtless been buried for purposes of concealment during the wars of 1776 and 1812. 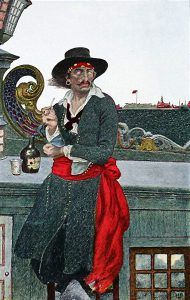 Gardiner’s Island, New York, a famous rendezvous for pirates, is the only place known to have been used as a bank of deposit, for in 1699 the Earl of Bellomont recovered from it 783 ounces of gold, 633 ounces of silver, cloth of gold, silks, satins, and jewels. In the old Gardiner mansion, on this island, was formerly preserved a costly shawl given to Mrs. Gardiner by Captain Kidd himself. Kidd was born in New York, began his naval career as a chaser of pirates, became a robber himself, was captured in Boston, where he was ruffling boldly about the streets and was hanged in London in 1701. In sea superstition, the apparition of his ship is sometimes confused with that of the Flying Dutchman.

At Lion’s Rock, near Lyme, Connecticut, a part of his treasure is said to be under the guard of a demon that springs upon intruders unless they recite Scripture while digging for the money. 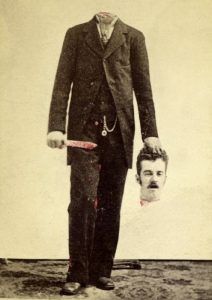 Charles Island, near Milford, Connecticut, was dug into one night by a company from that town that had learned of Kidd’s visit to it  —  and what could Kidd be doing ashore unless he was burying money? The lid of an iron chest had been uncovered when the figure of a headless man came bounding out of the air, and the work was discontinued right then. The figure leaped into the pit that had been dug, and blue flames poured out of it. When the diggers returned, their spades and picks were gone and the ground was smooth.

Monhegan Island, off the Maine coast, contains a cave, opening to the sea, where it was whispered that treasure had been stored in care of spirits. Searchers found within it a heavy chest, which they were about to lift when one of the party — contrary to orders — spoke. The spell was broken, for the watchful spirits heard and snatched away the treasure. Some years ago the cave was enlarged by blasting, in a hope of finding that chest, for an old saying had been handed down among the people of the island — from whom it came they have forgotten — that was to this effect: “Dig six feet and you will find iron; dig six more and you will find money.”

On Damariscotta Island, near Kennebec, Maine, is a lake of salt water, which, like dozens of shallow ones in this country, is locally reputed to be bottomless. Yet Kidd was believed to have sunk some of his valuables there, and to have guarded against the entrance of boats by means of a chain hung from rock to rock at the narrow entrance, bolts on either side showing the points of attachment, while ring bolts were thought to have been driven for the purpose of tying buoys, thus marking the spots where the chests went down. This island, too, has been held in fear as haunted ground. 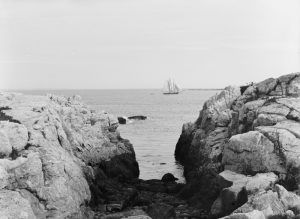 Gorge at Appledore, Isles of Shoals, Maine by Detroit Publishing, 1900

Appledore, in the Isles of Shoals in Maine, was another such a hiding-place, and Kidd put one of his crew to death that he might haunt the place and frighten searchers from their quest. For years no fisherman could be induced to land there after nightfall because an islander once encountered “Old Bab” on his rounds, with a red ring around his neck, a frock hanging about him, phosphorescence gleaming from his body, who peered at the intruder with a white and dreadful face, and nearly scared him to death.

A spot near the Piscataqua River, which defines the border between Maine and New Hampshire, was another hiding-place, and early in the 19th century the ground was dug over, two of the seekers plying pick and spade, while another stood within the circle they had drawn about the spot and loudly read the Bible. Presently their implements clicked on an iron chest, but it slid sideways into the ground as they tried to uncover it, and at last, an interruption occurred that caused them to stop work so long that when they went to look for it again it had entirely disappeared. This diversion was the appearance of a monster horse that flew toward them from a distance without a sound, but stopped short at the circle where the process of banning fiends was still going on, and, after grazing and walking around them for a time, it dissolved into air.

Kidd’s plug is a part of the craggy steep known as Cro’ Nest, on the Hudson River. It is a projecting knob, like a bung closing an orifice, which is believed to conceal a cavern where the redoubtable captain placed a few barrels of his wealth. Though it is 200 feet up the cliff, inaccessible either from above or below, and weighs many tons, still, as pirates and devils have always been friendly, it may be that the corking of the cave was accomplished with supernatural help, and that if blasts or prayers ever shake the stone from its place a shower of doubloons and diamonds may come rattling after it. 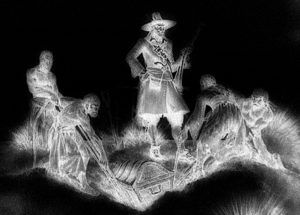 The Rock Hill estate in Medford, Massachusetts, was plagued by a specter that some thought to be that of a New Hampshire farmer who was robbed and murdered there, but others say it is the shade of Kidd, for iron treasure chests were found in the cellar that behaved like that on the Piscataqua River, sinking out of sight whenever they were touched by shovels.

Misery Islands, near Salem, Massachusetts, were dug over, and under spiritual guidance, too, for other installments of Mr. Kidd’s acquisitions, but without avail.

It takes no less than half a dozen ghosts to guard what is hidden in Money Hill, on Shark River, New Jersey, so there must be a good deal of it. Some of these guardians are in sailor togs, some in their moldy bones, some peaceable, some noisy with threats and screams and groans — a “rum lot,” as an ancient mariner remarked, who lives near their graves and daytime hiding-places. Many heirlooms are owned by Jerseymen hereabout that were received from Kidd’s sailors in exchange for apple-jack and provisions, and two sailor-looking men are alleged to have taken a strong-box out of Money Hill some years ago, from which they abstracted two bags of gold. After that event, the hill was dug over with great earnestness, but without result to the prospectors other than the cultivation of their patience.