Egmont Key, Florida by the US Fish and Wildlife Service

Fort Dade on Egmont Key in the mouth of Tampa Bay, Florida was established in 1898 during the Spanish American War.

It was the second “Fort Dade” to built in Florida. The first was established in Pasco County in 1836 during the Second Seminole War but had been long abandoned by the time the Egmont Key post was founded. Both forts were named for Major Francis L. Dade who was killed along with his entire command of 107 troops, with the exception of three soldiers, in the Dade Massacre of December 1835. 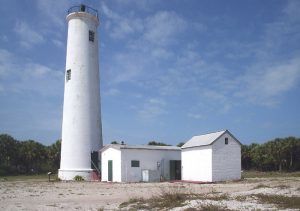 Before a fort was established on the island, it served various government and military purposes.

In the 1850s, near the end of the Third Seminole War, Egmont Key was used as a holding area for Seminole Indians as they were being transported to Indian Territory (Oklahoma). Considered as “prisoners of war”, the Indians were shipped from Fort Myers to Egmont Key, until sent West to the reservation. As many as 300 Seminole were interned on the island before the last group of prisoners was sent west in 1858.

Early in the Civil War, the key saw occupation by Confederate blockade-runners, but their occupation was short-lived. In July 1861 Union Naval forces captured the key and used it as a base of operation for the East Gulf Blockading Squadron. During this time they built many structures near the lighthouse, which served the Union as a watchtower. It also served as a staging ground for attacks against the city of Tampa. 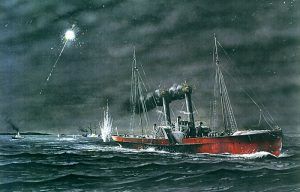 During this time, many Confederate prisoners were held on the key, along with escaped slaves and Union sympathizers. In 1864, a cemetery for Union and Confederate soldiers was established, interring at least 13 men between 1864 and 1865, remaining in use until 1909 when the bodies were removed to national cemeteries in Florida and Georgia.

In November 1882, Egmont Key, along with nearby Mullet Key, were set aside as U.S. Military reservations. In May 1887, Key West was ravaged by yellow fever and two months later the government established a U.S. Marine Hospital Service on Egmont Key for the sick. 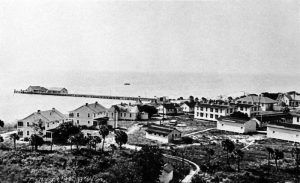 When the Spanish-American War broke out in April 1898, the U.S. Government began to construct Fort Dade, as well as Fort De Soto on Mullet Key to counteract a possible Spanish invasion. To protect Tampa, gun batteries, docks, rail lines, and a thousand tent U.S. Marine Hospital was established at Fort Dade to serve wounded troops. But, the Spanish-American War was short-lived, the Spanish fleet never came, no shots were ever fired from Egmont guns, and the war officially ended in August 1898.

Despite the fact that the war was over, work continued at Fort Dade, as the military still wanted to fortify the key. By 1899, the fort contained 12 buildings, including two 109 man artillery barracks, officers’ quarters, a hospital, mess hall, administration building, a guardhouse, and various support buildings. By the next year, Fort Dade was called home to about 150 people.

Soon, a town began to develop around the fort and between 1899 and 1916 over 70 buildings, predominately wood frame, were constructed. The early batteries were replaced by more permanent gun emplacements, totaling five in 1906. Expansion continued and commanding officer quarters, NCO quarters, a gym, a fire station, and a new guardhouse were added between 1908 and 1911. Recreational opportunities for the troops included tennis, baseball, bowling, a gymnasium, a movie theater, and more. By 1910, the town of Fort Dade, which had grown up around the fort, boasted about 300 residents and its buildings stood along brick streets. 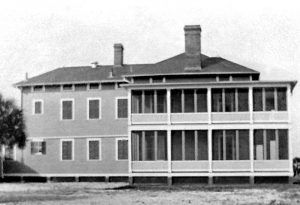 When the United States joined World War I in April 1917 Fort Dade was used as a training center for National Guard Coast Artillery Units. During this time a mine-laying dock was added at the north end of the island in response to the development of submarine warfare. At this time, the island’s population nearly doubled to 600, and more buildings were constructed. A power plant, built in 1919, was the last major structure built on the post. By 1920, the population of the island shrank to 294, most of which worked in the Coast Artillery.

In October 1921, a hurricane caused damage to many of the fort buildings and destroyed the boathouse and wharf. By this time, elaborate coast defense installations were mostly considered obsolete. The fort was closed and placed in caretaker status in May 1923. Through the 1920s and into the 1930s the Coast Guard utilized Egmont Key as a firing range. Fires in 1925 and 1927 destroyed major buildings including both the 109 man artillery barracks and the mess hall.

Between 1935 and 1936, four more fires raged on the island and the Coast Guard requested and received permission to level to the ground of many of the remaining structures that presented fire hazards. During this same period, several hurricanes occurred further damaging the remains of the fort and the town. 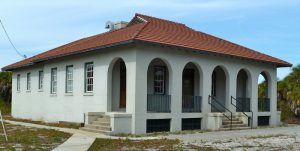 Military activity was resumed in World War II when Egmont Key served as a harbor entrance patrol station and provided ammunition storage facilities for vessels entering Tampa Bay. The War Department took control of much of the island, clearing roads, refurbishing the few remaining buildings, and erecting new structures during the early days of the conflict. At this time there were over 150 Coast Guard, Army, and Navy men stationed on the island. 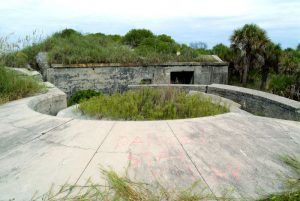 At the present time, the US Coast Guard maintains the lighthouse, dock, and auxiliary structures and 55 acres at the north end of the island. The lighthouse is believed to be the oldest structure still used for its original purpose in the Tampa Bay area. It also constitutes the most prominent historical structure on the island.

The Tampa Bay Pilots Association continues to lease a 10-acre tract of land, along the southeast side of the island to conduct its business of piloting large ships in and out of Tampa Bay. Here, are a station, dock, boathouse, and several cottages belonging to the individual pilots. From eight to twelve men, including the pilots,

The historic ruins of Fort Dade and Egmont Key State Park are managed by the Florida Park Service in cooperation with the U.S. Fish and Wildlife Service. Structural ruins of the military installations that once occupied the entire island are abundant. Remnants of the brick and concrete streets remain in good condition, including almost a mile of road between the lighthouse and the pilot station. The massive earth and concrete batteries have been stripped of all guns. 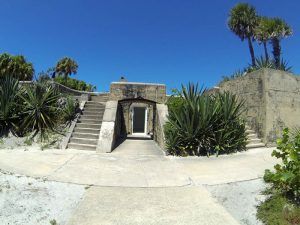 The gutted shells of several Fort Bade buildings, including the Mess Hall and post-jail, remain standing. The ruins of ammunition bunkers, spotting towers, mine handling facilities, and other facilities are still identifiable. However, the ravages of time, fire, wind, rain, ocean tides, vandalism, and neglect have taken their toll on the structures of the island. In the meantime, the foliage has taken over where many of the buildings once stood. Over the years, the island has suffered much erosion and has shrunk. Several of the ruins are partially or fully underwater.

The Egmont Key State Park also provides visitors with a number of well-kept trails and beautiful beaches. The island is only accessible by boat and an island ferry departs from Fort De Soto State Park. A number of tour companies also provide rides to and from the island. 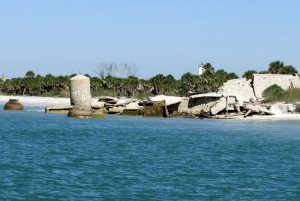