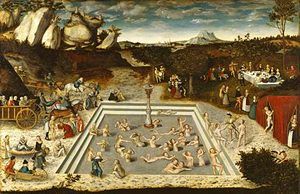 Life would be infinitely happier if we could only be born at the age of 80 and gradually approach 18. — Mark Twain

For centuries the search for eternal youth or elongated life has been a frequent topic of various myths and legends from around the world. One of the earliest accounts is from the Greek historian Herodotus in the 5th century BC when he wrote of a fountain of youth in the land of Macrobians, which gave the people of the region exceptionally long life spans. Alexander the Great searched for the fountain of youth in the 4th century BC and was said to have come across a healing “river of paradise’ and the legendary King Prester John claimed to rule a land that had a fountain of youth during the early Crusades of the 11th and 12th centuries AD. In Japan, stories of hot springs that could heal wounds and restore youth were also common and still are to this day. Similar stories were prominent among the Caribbean people during the early 16th century, who spoke of restorative powers of the water in the mythical land of Bimini. Similar legends have been found in the Canary Islands, Polynesia, and England.

Based on these many legends, explorers and adventurers have long looked for the elusive Fountain of Youth or, at least, some remedy to aging, which was most often associated with magic waters. These waters were not necessarily a fountain but might have been a river, a spring, or any other water source that was said to reverse the aging process and cure sickness when drank or bathed in.

The name linked most closely to the search for a fountain of youth is 16th-century Spanish explorer Juan Ponce de Leon, who allegedly thought it would be found in Florida.

In 1493, Ponce de Leon sailed with Christopher Columbus on Columbus’ second voyage to the Americas. He and his family settled on an island in the Caribbean named Hispaniola (Dominican Republic). He became a military commander at this post and was appointed deputy governor. In 1505 he helped to crush a Taino rebellion on Hispaniola and as a reward was granted a provincial governorship and hundreds of acres of land, where he used forced Indian labor to raise crops and livestock.

In 1506, he discovered a nearby island named Borinquen and there, he found large deposits of gold. He returned to the island in 1508 on orders from the king of Spain to explore and colonize it. He renamed the island Puerto Rico and became the island’s governor for two years until the king replaced him with Columbus’ son, Diego.

Hurt by the King’s action, Ponce de Leon sailed again, this time north through the Bahamas heading towards Florida. He was in search of new lands and treasures. He allegedly had also heard of a mythical fountain of youth. Indians spoke of a legendary, magical spring whose water was believed to make older people young again. Ponce de León explored many areas, including the Bahamas and Bimini, for both gold and the mythical fountain, but he never found either. In early April 1513, his ships landed on Florida’s east coast near present-day St. Augustine. He claimed the area for Spain and named it La Florida or “place of flowers.” Afterward, he continued his exploration of the coast, making his way down through the Florida Keys and up the western coast, where he skirmished with Indians. He then began to journey to Puerto Rico, where he purportedly discovered the Gulf Stream.

He would return to Spain and be named a Captain-General by the King on September 27, 1514. His last expedition was searching for the island of Bimini in 1521. His force of 200 men landed on the west coast of Florida, but, were met by Native American warriors, who wounded many of the men with arrows, including Ponce de Leon. He later died in Havana, Cuba from this wound in July 1521. He is buried in San Juan, Puerto Rico.

Though the legend persists that these journeys were made in the effort to find the Fountain of Youth, de Leon’s documents and letters make no mention of such a fountain nor a search for magical waters. It was only later that writers began to connect Juan Ponce de Leon to the elusive Fountain of Youth. Instead, the documentation focuses on colonization, the spread of Christianity, and determining whether Florida was an island or a peninsula. Historians believe that de Leon was much more interested in looking for islands that he might gain another profitable governorship.

Though no evidence exists, historians have long linked Ponce de León with the Fountain of Youth, beginning shortly after his death. In 1535 Gonzalo Fernández de Oviedo y Valdés, a Spanish historian and writer, accused Ponce de León of seeking the fountain in order to cure his sexual impotence. This, however, was highly unlikely as de Leon had fathered several children and was under 40 years old at the time of his first expedition. While a few historians of the time disputed his search for the Fountain of Youth, others quickly picked up on de Leon’s alleged search and perpetuated the legend.

When the Spanish ceded Florida to the United States in 1819, American writers joined in continuing the legend and building Ponce de León’s name. By the early 20th century, a statue of de Leon was placed in the central plaza of St. Augustine and a nearby tourist attraction pretended to be the actual Fountain of Youth. To this day, numerous sources still state that de Leon’s primary objective was in finding the magical waters. 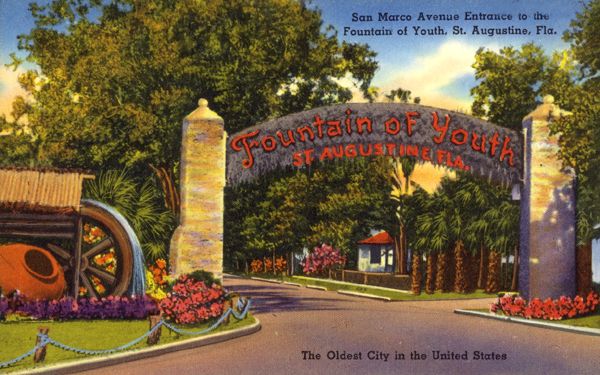 Today, legends meet history at the Fountain of Youth Archaeological Park, where thousands of visitors come each year to sample the sulfur-smelling water. Located in the area first explored by Juan Ponce de Leon in 1513 and settled by Pedro Menendez de Aviles in 1565, a coquina building encompasses a spring that was first recorded in a 17th century Spanish Land Grant. With signed guest books stretching back to 1868, the Fountain of Youth is the oldest attraction in Florida. The spring issues forth directly from the Floridian aquifer, which lies below ground under much of North Florida. The water contains over 30 minerals and many believe that it has healthful properties.

The first archaeological digs at the Fountain of Youth were performed by the Smithsonian Institution in 1934 who found a large number of Christianized Timucua Indian burials. These burials eventually pointed to the Park as the location of the first Christian Mission in the United States, called the Mission of Nombre de Dios, which was established by Franciscan friars in 1587. Succeeding decades have seen the unearthing of items which positively identify the Park as the location of Pedro Menéndez de Avilés’ 1565 settlement of St. Augustine, the oldest continuously inhabited European settlement in North America. The park currently exhibits native and colonial artifacts to celebrate St. Augustine’s Timucua and Spanish heritage.