A Spanish explorer and soldier, Juan Ponce de Leon was the first European to set foot in Florida. He also established the oldest European settlement in Puerto Rico and discovered the Gulf Stream. He is most famous for his search for the legendary Fountain of Youth and other riches.

Born in Santervas, Spain, in about 1460, Ponce de Leon grew up to become a soldier and fought Muslims in southern Spain in the early 1490s. In 1493, Ponce de Leon sailed with Christopher Columbus on Columbus’ second voyage to the Americas. He and his family settled on an island in the Caribbean named Hispaniola (Dominican Republic). He became a military commander at this post and was appointed deputy governor. In 1506, he discovered a nearby island named Borinquen, and there, he found large deposits of gold. He returned to the island in 1508 on orders from the king of Spain to explore and colonize it. He renamed the island Puerto Rico and became the island’s governor for two years until the king replaced him with Columbus’ son. 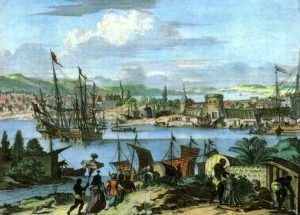 Hurt by the King’s action; Ponce de Leon sailed again, this time north through the Bahamas heading towards Florida. He was in search of new lands and treasures. He had also heard of a mythical fountain of youth. Indians spoke of a legendary, magical spring whose water was believed to make older people young again. León explored many areas, including the Bahamas and Bimini, for both gold and the mythical fountain, but he never found either.

In early April 1513, his ships landed on Florida’s east coast near present-day St. Augustine. He claimed the area for Spain and named it La Florida or “place of flowers.” He continued his exploration of the coast. After returning to Puerto Rico, he was caught up in fighting with the Native Americans to put down their rebellions against Spanish rule. He returned to Spain and was named a Captain-General by the King of Spain on September 27, 1514. His last expedition was searching for the island of Bimini in 1521. His force of 200 men landed on the west coast of Florida but was met by Native American warriors, who wounded many of the men with arrows, including Ponce de Leon. He later died in Havana, Cuba, from this wound in July 1521. He is buried in San Juan, Puerto Rico.