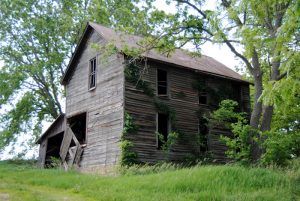 In 1869, George Brenner planted the first five acres of the famous Belleview vineyard. The same year, he erected a large two-story brick building to accommodate his wine interests. The building measured 65×44 feet, with a large cellar, and a storage room for 90,000 gallons of wine. The  Brenner vineyards would eventually grow to occupy over 50 acres, employ dozens of workers for every harvest as well as year-round staff. The wineries produced as much as 150,000 gallons in their peak years, shipping to buyers all over the country. 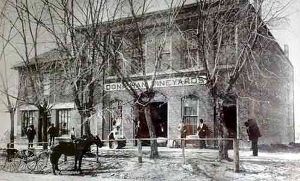 The same year, Doniphan was incorporated, judges were appointed, and a city council was organized.

With the arrival of the railroad in northeast Kansas in 1870, the importance of the steamboat diminished and the advantages of Doniphan’s excellent steamboat landing began to fade. The Atchison & Nebraska Railroad arrived at Doniphan in January 1871. At that time, there were 228 families in Doniphan, with a population of 1,020. That year, the Doniphan Democrat newspaper was launched in May and ran for about a year. Afterward, it was taken over by new owners and published briefly as Doniphan Herald in the summer of 1872, and then discontinued.

In 1872, a fire burned Adam Brenner’s large grain elevator, along with its contents, a large amount of grain. However, the vineyards were still doing well, as attested to by the Doniphan Herald, which stated:

“We visited the wine cellars of the Brenners this week, and to say that we enjoyed the sparkling fluid from the 1,000-gallon cask, would not half express our delight in that visit. Such delicious wines are not found elsewhere in the United States. Those Brenner wines are getting a reputation not to be excelled anywhere in the country. Hermann [Missouri] has heretofore claimed the laurel in wines, but Doniphan now so far surpasses her in quality that Hermann must stand aside.” 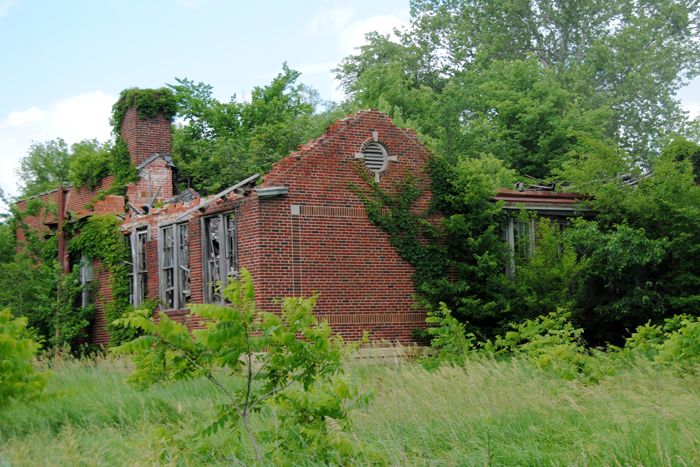 By 1882, Doniphan had three general stores, two drug stores, a wagon shop, two blacksmith shops, a wholesale liquor house, a meat market, a hotel, a feed stable, three millinery and dressmaking establishments, two saloons, a printing office, four wine cellars, and a shoe shop. Professionals in town included two physicians, three carpenters, three stonemasons, a plasterer, a cooper, and a surveyor. There were three church organizations and two secret societies. The Atchison & Nebraska Railroad entered the town from the north, terminating between Sixth and Seventh Streets. This year, the last newspaper of the town, the Doniphan County Weekly News began in March but lasted less than six months. 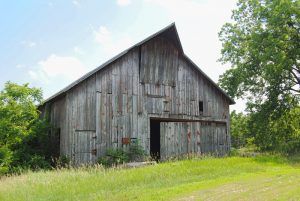 By 1887, the railroad no longer entered Doniphan, instead, it bypassed it to the west, and only stopped at Doniphan Station, which was a few miles northwest of town. This bypass undoubtedly harmed the towns’ businesses. By this time, nearby Atchison, Kansas and St. Joseph, Missouri were flourishing as railroad hubs, drawing many people and businesses away from Doniphan.

In June 1891, the Missouri River flooded and a new southern channel was created, resulting in thousands of yards of railroad track washing away and leaving Doniphan landlocked. Where the steamboats once docked was now an inland village beside a large pool of water, which was called Doniphan Lake. The railroad rebuilt two miles to the west and Doniphan went into a steep decline. 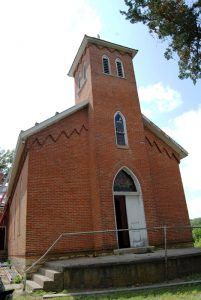 By 1905, Doniphan had only a few businesses left, including a blacksmith, two general merchandise stores, and a grocery store. By 1910, the population was only 134 and the next year, the town was described by the Kansas City Star as “desolate and almost deserted.” The Brenner family winemaking enterprises finally ended in 1912.

However, the town continued on for several decades. Its post office closed its doors forever in August 1943 and its Rural High School Number 10 closed in 1947. In 1949, Doniphan still had a grocery store and a gas station but only about 50 residents. The Army Corps of Engineers emptied Doniphan Lake in the 1950s.

Today, there is little is left of Doniphan, except for a few buildings in various states of decay. However, its Catholic Church has been restored and continues to be utilized for special masses such as weddings and funerals. The Brenner Vineyards Historic District was placed on the National Register of Historic Places in 2005, which includes 4.9 acres, the St. John’s Catholic Church, a two-story winery building, a barn, corncrib and pump-house, a smokehouse, and the ruins of Adam Brenner’s house and winery. A still utilized cemetery sits nearby. A few residents still live in the area.

To reach Doniphan from Atchison, take River Front Road north from Riverfront Park, and follow it to Mineral Point Road for about seven miles. The historic district is located at the intersection of Mineral Point and 95th Roads. 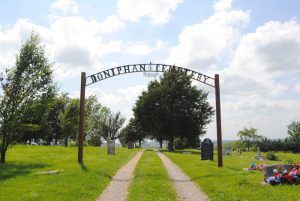