Hermann, Missouri, the county seat of Gasconade County, evolved out of an effort to preserve German culture and traditions in America. 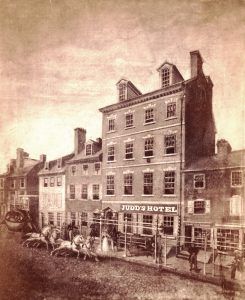 In the early 19th century several waves of German immigrants came to America and settled in Philadelphia, Pennsylvania. Dismayed at how quickly their countrymen were being assimilated into American society, many of the Philadelphia Germans dreamed of building a new city in the “Far West” that could and would be “German in every particular.”

In an effort to protect German traditions and heritage, the German Settlement Society was created in 1836. The society had almost utopian goals of a new community that could perpetuate traditional German culture and establish a self-supporting colony built around farming, commerce, and industry.

The Society soon sent several scouts into America’s heartland to search out land for the creation of their new settlement. One of these scouts, George Bayer, a Philadelphia schoolteacher who represented the Society, purchased 11,300 acres of land near the confluence of the Gasconade and Missouri Rivers. The steep, rugged terrain reminded him of the Rhine Valley in Germany, even though the beautiful area was perhaps not the most practical site for a town.

His descriptions of the area generated great enthusiasm among potential settlers back in Philadelphia. A town named Hermann, named for a German national hero, was platted by the Society before they even saw the land. On paper, Hermann was flat, with spacious market squares and sweeping boulevards. Thinking big, they made their city’s main street 10 feet wider than Philadelphia’s. 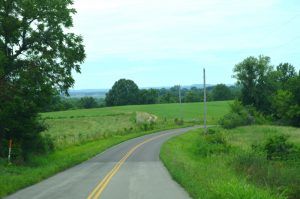 This area outside of Hermann, Missouri does not reflect the steep hills and rugged terrain in the immediate vicinity of Hermann that the early pioneers faced. Photo by Kathy Weiser-Alexander.

Soon, 17 settlers from Philadelphia started traveling westward to create their new community and when they stepped off the steamboat in December 1837, they discovered what one settler described as a “howling wilderness.” The land that Bayer purchased was located along steep bluffs overlooking the Missouri River, and the area’s rocky soil appeared to be totally inhospitable to agriculture. Their idealism died quickly and some were very angry to discover that the Hermann lots they had purchased back in Philadelphia were what today’s residents jokingly refer to as “vertical acreage.”

The emigrants who came to Hermann quickly realized that they needed to find viable alternatives to traditional grain agriculture if their community was to prosper. Most of the land in the area is hilly and was covered with dense forests, generally limiting the size of farms to less than 120 acres. Fortunately, the land was fertile enough to support limited grain farming and livestock ranching, creating an agricultural base for the local economy. A unique natural feature that Hermann’s settlers noticed was an abundance of wild grapevines growing along the rocky hillsides. Local soils turned out to be ideal for grape cultivation, and viticulture quickly became a key element of the local economy.

In addition to the farmers, tradesmen, artisans, businessmen, and professionals were also involved in the early settlement and formation of Hermann. Within a short time, streets were laid out, solid houses were constructed, shops and businesses were established. Within two years the Settlement Society had dissolved and George Bayer had passed away. However, Hermann survived its rocky start, and by 1839, its population had grown to 450 residents. 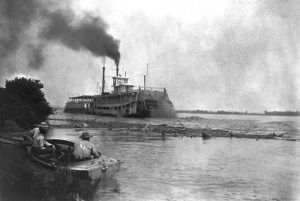 Paddlewheel steamboat on the Missouri River

The new town also grew as a steamboat port along the Missouri River, which was the primary transportation resource in Missouri during the early decades of the 19th century, and most emigrants who came to Hermann did so via the river. During these days, the town sported a tavern on every corner and the largest general store between St. Louis and Kansas City.

In 1842, Hermann became the county seat of Gasconade County. When the county was first organized in 1821 it was situated at Gasconade City along the Gasconade River. It then moved several times due to flooding so no permanent courthouse was built. In 1842, county voters decided to move the seat of government to Hermann to make sure it was out of the flood plain. Local residents contributed approximately $3,000 to build a square, two-story brick building located in the center of a city block along East Front Street. The courthouse sat atop a bluff overlooking the Missouri River, and its natural vistas added to the aesthetics of the community. By acquiring the county seat, Hermann gained prominence and ensured its continued success and growth. 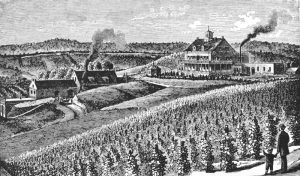 Within no time, area farmers developed new varieties of grapes well-suited to Missouri soils, and in 1847, Michael Poeschel opened Hermann’s first commercial winery on a hill overlooking the town. This winery would later become the Stone Hill Winery that still exists today.

In the fall of 1848, Hermann held its first Weinfest, bringing people to the city on steamboats from St. Louis where they enjoyed more than their share of sweet Catawba wine and marveled at the grapevine-covered hills. The Weinfest tradition continues in today’s Maifest and Octoberfest celebrations. 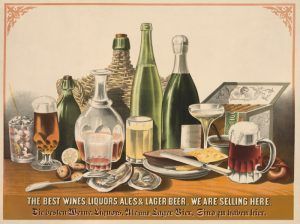 The quality of Hermann wines improved dramatically in the mid-1800s, thanks in large part to the work of George Husmann, whose father had purchased a Hermann lot while the family was still living in Germany. A self-taught scientist, Husmann studied soil types and crossed wild and cultivated grapes to create hybrids that could stand up to Missouri’s hot, humid summers and freezing winters.

In the latter half of the 19th century, railroads replaced steamboats as the primary means of transportation and Hermann became a station point along the Missouri Pacific Railroad between St. Louis and Jefferson City in 1854. This allowed Hermann to maintain its regional prominence as an agricultural shipping point and commercial center. Train transportation and access to outside markets also allowed for the creation of several light industrial plants within Hermann, most notably a shoe facility operated by the Florsheim Company. 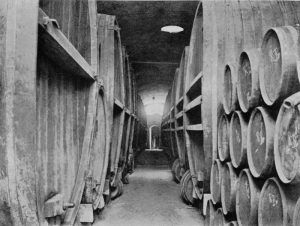 By 1860, approximately 30 steamboats were based in Hermann. These boats transported raw goods, such as lumber from surrounding forests, iron from the Meramec region, and barrels of wine and beer, downriver to St. Louis. The steamboats also contributed to the growth of Hermann’s early tourism industry by bringing visitors into the city. At this time, the town was called home to about 1,100 people.

In the early 1870s, Hermann residents began to celebrate Maifest, a traditional German celebration of the arrival of spring. After the German school was built, early Maifests were last-day-of-school picnics for children and after Sunday church, a bigger festivity was planned that included a parade to the city park, food, treats, and an afternoon of games. Many years later it would grow into a city-wide celebration. 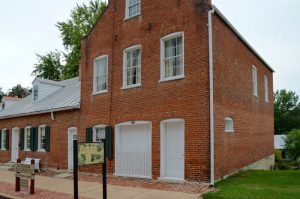 The Carl Strehly House in Hermann, Missouri was built in 1842 and enlarged over the years.

Economic diversity in the city provided stability and allowed Hermann to maintain its German heritage. Local presses produced several German-language newspapers, including one that was published in the Carl Strehly House, that is now part of the Deutschheim State Historic Site. Many residents spoke German well into the 20th century.

By the turn of the century, Hermann’s winemakers had become wildly successful. Stone Hill Winery had grown to be the second-largest winery in the country and was winning gold medals at World’s Fair competitions around the globe. By this time, the town’s numerous vintners were producing an incredible three million gallons of wine a year. By 1904, 20 wineries operated in the Hermann vicinity, and Poeschel’s facility had grown to become the third-largest winery in the world.