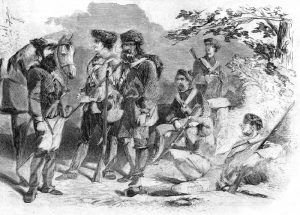 Secessionist Army in the Alleghany Mountains

After the Civil War began in April 1861, the state of Virginia was split in its loyalties. On April 17, 1861, just days after President Abraham Lincoln’s order to seize Fort Sumter, South Carolina, a convention of Virginians voted on the Ordinance of Secession. However, many of the delegates of the western part of the state voted against succession and began to lobby to form a new “pro-union” state. On November 26, 1861, West Virginia began the Secessionist Convention that would result in its breaking away from the Confederate state of Virginia. In the end, 50 counties became part of West Virginia on April 11, 1862, and the new state was admitted to the Union on June 20, 1863.

During the transition time and afterward, West Virginia was a target of Confederate raids, which focused on supplying the Confederate Army with provisions as well as attacking the vital Baltimore and Ohio Railroad that linked the northeast with the Midwest. Guerrilla warfare also gripped the new state, especially in the Allegheny Mountain counties to the east, where loyalties were much more divided than in the Unionist northwest part of the state. Despite this, the Confederacy was never able to seriously threaten the Unionists’ overall control of West Virginia.

The largest military engagements fought within the present-day West Virginia borders were at Harpers Ferry and Shepherdstown in September 1862, Droop Mountain in 1863, and Summit Point in 1864. Many of these battles included both Union and Confederate soldiers who were West Virginia natives who fought opposite each other. This was especially during the Shenandoah Valley campaigns of 1862 and 1864.

Like Maryland, Kentucky, Missouri, and the other border states, the allegiances of West Virginia’s citizens were split. The number of Confederate soldiers who came from West Virginia counties numbered in the neighborhood of 18,000. Devotion to different causes resulted in much irregular warfare, such as bushwhacking, raids by ‘‘partisan rangers,’’ and guerrilla attacks. Towns such as Romney endured repeated occupation by both sides and its citizens witnessed firsthand the cruelties of civil war.

By the end of the war, more than 32,000 soldiers had served in West Virginia regiments and other military organizations and fought in most of the large battles of the war.

When the Civil War was over in the spring of 1865, West Virginians of both the Blue and the Gray returned to their new state. Years later, when West Virginia Union veterans became eligible for federal pensions and Confederate veterans received pensions from their state governments, the West Virginia ex-Confederates again were on the losing side as West Virginia would not recognize their service, and the Commonwealth of Virginia would provide pensions only to its own residents. 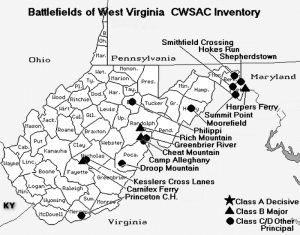 The Western Virginia Campaign, also known as Operations in Western Virginia or the Rich Mountain Campaign, occurred from June to December 1861 and included seven battles in present-day West Virginia. It began when Union forces under Major General George B. McClellan invaded the western portion of Virginia. This region was an important source of minerals the Confederates needed for the production of arms and ammunition. It also contained several roads that would give the Union access to Tennessee, North Carolina, and the Shenandoah Valley, while the Baltimore and Ohio Railroad in the northern part of the area connected the eastern Union states to the Midwest. After the region was occupied by the Union, it later became the state of West Virginia. Although Confederate forces would make several raids into the area throughout the remainder of the war, they would be unable to reoccupy the state. 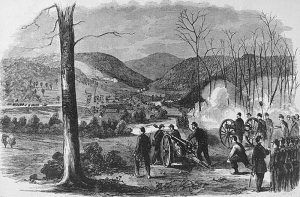 The first skirmish of the Operations in Western Virginia Campaign, the Battle of Philippi, also called the Battle of Philippi Races took place in Barbour County on June 3, 1861. At the time of the battle Union General Thomas A. Morris, who was temporarily in command of Union forces in western Virginia, mounted a two-prong advance under Colonel Ebenezer Dumont and Benjamin F. Kelley against a small Confederate occupation force at Philippi under Confederate Colonel George A. Porterfield. Kelley marched on back roads from near Grafton on June 2 to reach the rear of the town, while Dumont moved south from Webster. Both columns arrived at Philippi before dawn on the June 3rd. The resulting surprise attack routed the Confederate troops, forcing them to retreat to Huttonsville. Although a small affair, this was considered the first major land action in the Eastern Theater. The Union victory resulted in estimated casualties of four of the Union and 26 of the Confederate.

After the Battle of Philippi, five days of skirmishing took place in Barbour County between July 7 and July 11, 1861. This skirmishing was a diversionary attack to the opening portion of the Battle of Rich Mountain. After the Union soldiers route the Confederates at the Battle of Philippi, the rebel troops retreated south. Confederate General Robert S. Garnett moved about 3,500 troops to Laurel Mountain and made camp at the base of the mountain. On July 6, General George B. McClellan ordered General Thomas A. Morris to advance from Philippi to Belington with about 5,000 Union troops. Skirmishing began on July 7 and lasted for five days, with the Union routing the Confederate troops. Upon hearing of the simultaneous defeat of forces at Rich Mountain, General Garnett retreated with his troops to Corrick’s Ford near Parsons where he soon became the first general officer to be killed in the war. 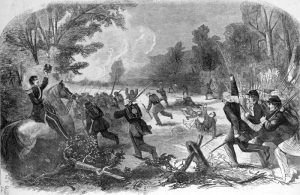 The third battle of the Western Virginia Campaign, this conflict took place in Randolph County on July 11, 1861, after Major General George B. McClellan assumed command of the Union forces in western Virginia the previous month. On June 27, he moved his divisions from Clarksburg south against Lieutenant Colonel John Pegram’s Confederates, reaching the vicinity of Rich Mountain on July 9. Meanwhile, Brigadier General Thomas A. Morris’ Union brigade marched from Philippi to confront Confederate Brigadier General Robert S. Garnett’s command at Laurel Hill. On July 11, Brigadier General William S. Rosecrans led a reinforced brigade by a mountain path to seize the Staunton-Parkersburg Turnpike in Pegram’s rear. A sharp two-hour fight ensued in which the Confederates were split into two groups, of which half escaped to Beverly, but Pegram and the others surrendered on July 13.  Hearing of Pegram’s defeat, Garnett abandoned Laurel Hill. The Federals pursued, and, during fighting at Corrick’s Ford on July 13, Garnett was killed. On July 22, McClellan was ordered to Washington, and Rosecrans assumed command of Union forces in western Virginia. Union victory at Rich Mountain was instrumental in propelling McClellan to command of the Army of the Potomac. The Union victory resulted in 46 Union casualties, and 300 Confederate.