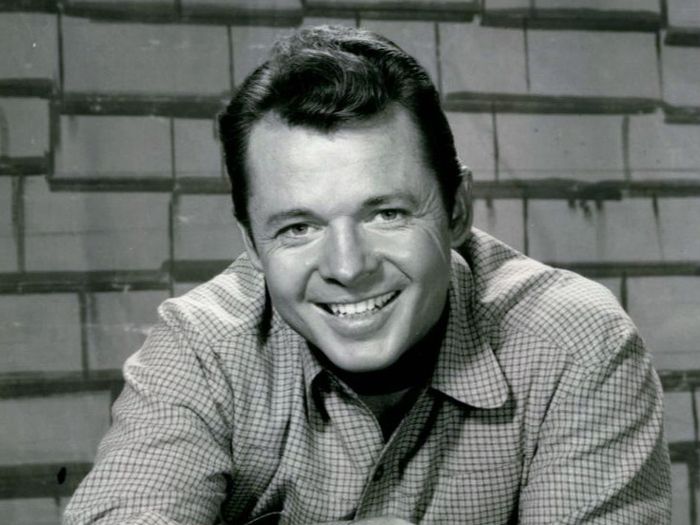 Photo of Audie Murphy as Tom Smith from the television program Whispering Smith, 1961

He was born to a poverty-stricken family of cotton sharecroppers on June 20, 1924. He rose to fame in World War II as America’s most decorated hero. He received 24 decorations, including the Congressional Medal of Honor, before his 21st birthday. All of America knew who he was when his photo appeared on the cover of Life Magazine on June 10, 1945. Soon the entire world was aware of Audie Murphy. At that point in time, he planned to become a career Army man, but destiny had other ideas. 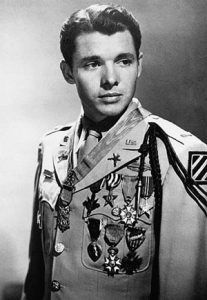 Motion picture icon, James Cagney, saw the Life photo. Cagney realized in Audie, with his soft Texas voice, good-looking youthful looks, plus the fact that he was America’s most decorated soldier, a sure bet for motion picture stardom. Cagney signed him to a contract to make films for his company. Like it does so many times, best-laid plans fail. Audie came to California and lived at Cagney’s home for over a year. When nothing worked out, Audie moved out and started looking for movie work. His first break came in 1947. A small part in Beyond Glory, a Paramount film that starred Alan Ladd with Donna Reed. The screenplay saw Ladd and Murphy as West Point cadets. The critics liked Audie, and a long career was born.

Slowly he picked up better acting assignments, but a big lift to his career came in 1949 when his autobiography To Hell and Back was published, sending him on a tour of Southwest book signings. Later the book became a bestseller and critics praised it as a masterpiece. Rejected by both the Marines and Airborne because he was too small, Audie was determined to serve his country. Serve he did in the Army infantry in battles in Sicily, Italy, France, and Germany.

Audie’s acting in the classic The Red Badge of Courage should have earned him an Academy Award for his portrayal of a coward who ran in the face of battle. The MGM release fell short due to the fact that the director, John Huston, did not edit the film but left it in the studio’s hands, which is always a tragic mistake. Huston rushed off to Africa to direct Bogart and Hepburn in The African Queen, robbing Audie of the award critics felt he deserved.

Like millions of others, I followed Murphy’s military and cinema careers with great interest and always wondered what the man behind the legend was like. I got my answer in 1952 when a publicity person from Universal-International called me and asked if I would be interested in having Audie as a guest on my television show at KPHO, Phoenix, Arizona. He was going to be in town for three days, with beautiful Susan Cabot to promote his new film, The Duel at Silver Creek, which by the way, included a bit player named Lee Marvin, who was not a part of the tour.

This was an offer I couldn’t refuse. I told the Universal people that I would give Audie and Susan a spot on my show and if it fit into their schedule, I would have them back on the third day for a review after the film opening.

Audie had married Pamela Archer in April 1951 following his divorce from actress Wanda Hendrix. Pamela and Audie were expecting their first child in March. At the same time, Audie was soon to arrive in Phoenix; soldier, actor, expectant father, and citizen. 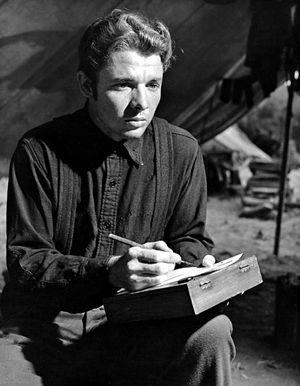 Original studio publicity photo of Audie Murphy for the film The Red Badge of Courage.

When we first met, he reminded me of a cat who has lived with a great deal of trauma in his life, and you take him into your home. Like a cat, he was very wary of strangers until he got to know you. The thing that brought us together fast was our mutual love of music. I had no idea he was a songwriter, but through the years, his songs were recorded by name artists like Jimmy Dean, Dean Martin, Charlie Pride, Roy Clark, Eddy Arnold, Jerry Wallace, Teresa Brewer, and Porter Waggoner. Audie was very impressed by a singer/guitarist I had hired to do a twelve-minute segment on my show. Marty Robbins, who would become a country music icon, who was singing a song my husband, Robert Cawley, had written titled “Raindrops On My Window and Teardrops in My Heart.” In 1962 Audie and co-writer Scott Turner wrote “Shutters and Boards.” Recorded by Jerry Wallace, it sold over 600,000 copies.

I was surprised to find that Audie was also a poet and should have been published. He started writing during the war and his work was the equal of any first-class writer. You have to remember he was forced to quit school after the fifth grade to go to work as a farmhand. This makes his many achievements all the more remarkable.

On camera, we talked about his film, and Susan Cabot added a lot of beauty to the set. Off-camera, we never spoke of war with the exception that Audie wanted Universal to finance a film based o his life and book, “To Hell and Back.” That came true in 1955. As a big-budget film, it proved a huge success.

We talked about the baby that was on its way and how much he wanted a family. He was very aware that having a family meant having a steady income, and although hoping for better roles in better stories, he had signed a long-term contract with Universal. He joked that he would “probably make thirty or forty westerns for the studio because they made money, but the only change in the films would be the horses.”

Audie loved kids, the outdoors, and animals. He was a very nice person to know and very interesting. Citizen Murphy could have been the guy next door. Before he left Phoenix, we promised to keep tabs on each other via the mail. That always sounds good, but the truth was that after a couple of months, the notes dropped off and then vanished. The Murphy’s first child was a boy they named Terry, and two years later, a son James arrived.

Audie enjoyed a steady career and, once in a while, got a role that let him expand his range as an actor. Fans and critics alike loved him in “To Hell and Back.” However, they wanted him in westerns and were happy when he co-starred with Jimmy Stewart in “Night Passage” although Audie played the role of an outlaw. In 1960 Audie gave what should have been an award-winning performance by a supporting actor in “The Unforgiven,” a western that starred Burt Lancaster and Audrey Hepburn and was directed by John Huston.

I would have liked to have known Audie Murphy better. Not because of his military record or his film work, but as a friend. A regular guy who had a great love of life. He could hold an intelligent conversation on many subjects and was fun to be with.

Audie died May 28, 1971, along with five business partners in the crash of their private plane during a rainstorm 20 miles south of Roanoke, Virginia. He was buried at Arlington National Cemetery with full military honors.

His wife, Pamela, worked at the Veterans Administration Hospital in Los Angeles, California, until she died in 2010. 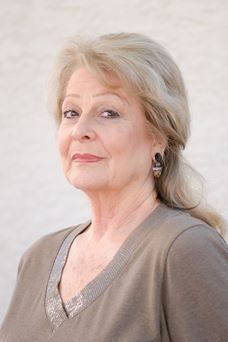 About the Author: Multi-talented Rena Winters has enjoyed an outstanding career in the entertainment industry as a writer, talent, producer, production executive, and major TV and Motion Picture executive.

Her writing ability won the coveted Angel Award for the outstanding family TV special, How to Change Your Life, which she co-hosted with Robert Stack. She wrote the two-hour script and co-produced for My Little Corner of the World, winner of the Freedoms Foundation and American Family Heritage awards. Her feature films include The Boys Next Door, KGB, the Secret War, Charlie Chan & the Curse of the Dragon Queen, and Avenging Angel. Her producing credits include The Juliet Prowse Spectacular for 20th Century Fox, Sinatra – Las Vegas Style, and Peter Marshall – One More Time, which produced a best-selling soundtrack album.

Award-winning and best-selling author Winters’ forthcoming book entitled Evil Eyes is a true-crime story set in Phoenix, Arizona. It is a high-tension thriller based on a true story reported and solved by Gene McLain, the man called “the greatest investigative reporter of our time.” The year was 1950 when a missing person’s report turned into one of the most suspenseful stories of a double homicide ever recorded. It was a perfect crime. No motive – no clues. Against all odds, McLain found the bodies, then caught the killer 3,000 miles away from the scene of the crime.