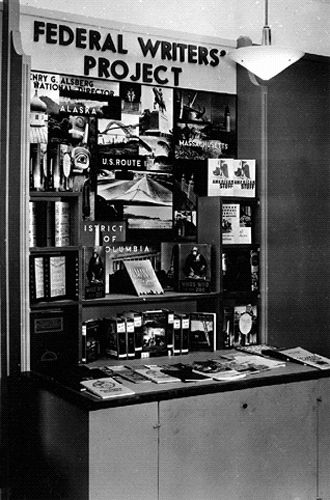 The Federal Writers’ Project (FWP) was a United States federal government project to fund written work and support writers during the Great Depression. It was part of the Works Progress Administration, a New Deal program established on July 27, 1935.

The plight of the unemployed writer, and anyone who could qualify as a writer such as a lawyer, a teacher, or a librarian, during the early years of the Depression, was of concern not only to the Roosevelt Administration but also to writers’ organizations and persons of liberal and academic persuasions. Generally, it was felt that the New Deal could come up with more appropriate work situations for this group other than blue-collar jobs on construction projects.

The outcome was a project for all the “arts,” which was called Federal One. Part of President Roosevelt’s Second New Deal, Federal One was divided into five specialties – writers, historical records, theater, music, and art. Professionals in the field headed each program.

The Federal Writers Project was first operated under journalist and theatrical producer Henry Alsberg and later John D. Newsome, who were charged with employing writers, editors, historians, researchers, art critics, archaeologists, geologists, and cartographers. Some 6,600 individuals were employed by the project compiling local and cultural histories, oral histories, children’s books, and other works. 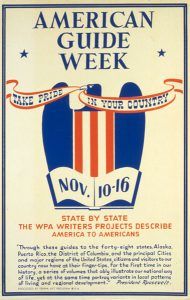 The most well-known of these publications were the 48 state guides to America known as the American Guide Series. These books contained detailed histories of each state with descriptions of every city and town and the state’s history and culture, automobile tours of important attractions, and a portfolio of photographs.

In each state, a Writer’s Project staff was formed with editors and field workers. Some offices had as many as 150 people working, a majority of whom were women. Staff also included several well-known authors of the time and helped to launch the literary careers of others.

Though the project produced useful work in the many oral histories collected from residents throughout the United States, it had its critics from the beginning, with many saying the federal government attempted to “democratize American culture.” Though most works were apolitical, this was not always the case, as writers who supported political themes sometimes voiced their positions in their writings. This led some state legislatures to oppose some projects strongly, and in a few states, the American Guide Series books were printed only minimally.

As the Project continued into the late thirties, criticism continued, and several Congressmen were intent on shutting down the enterprise. In October 1939, federal funding for the project ended due to the Administration’s need for a larger defense budget. However, the program was permitted to continue under state sponsorship until 1943.

During its existence, the project included a rich collection of rural and urban folklore, first-person narratives from people coping with the Depression, studies of social customs of various ethnic groups, and over 2,300 first-person accounts of slavery. 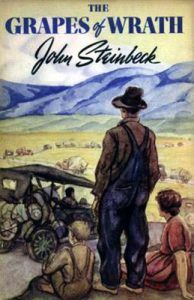 Grapes of Wrath by John Steinbeck

In documenting the common people, several books emerged from writers on the project, including Jack Conroy’s The Disinherited and John Steinbeck’s enduring classic The Grapes of Wrath.

To see many of the writings of the FWP, go here:  Digital Collections, Library of Congress.