Since I grew up in the 1950’s it is fun for me to reflect on some of the nifty things during that era. 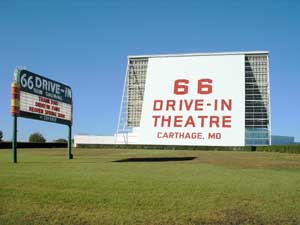 Known then as the “passion pit”, Drive-In Theatres bring back many happy memories! My birthday being in July was the prime season for Drive-In movies. I would invite all my friends over to celebrate my birthday complete with my mother’s homemade barbeque sandwiches which was my favorite. She would make it from sliced rump roast and then lay the meat in an electric skillet smothered in barbecue sauce.

Just before dark, we would all pile into a car and head for the Drive-In. I still remember the intermission jingle “Let’s all go to the lobby” with the hot dog, soda drink, and popcorn dancing across the screen. The Drive-In was the favorite place to go on a date and after the show, we would go to the Steak n Shake for a hamburger and fries. At that time you stayed in your car and your food was brought to you. A tray holder was placed on the driver’s side window to hold the food. It was just brought to my attention from my teenage grandchildren that “going steady” is no longer used. I asked them what do you call it now? They replied just “going out”. Makes no sense to me, but that is how times change. Back in the ’50s and ’60s when you were “going steady,” the girl would be given her boyfriend’s ring to wear. Because they were always too big to fit, we would wrap the back with white bandage tape and then cover that with fuzzy angora yarn in different colors… way too cool! The only place you could buy the angora in my town was a department store downtown and I can still remember that they did not have cash registers at the counters, but instead, the clerk would send your money through a vacuum tube that led upstairs to the cashier’s office. It was much like the drive-in banking tube that is used today. 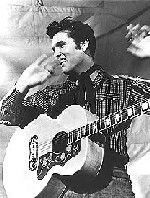 The summer of 1955 with Bill Haley’s song “Rock Around the Clock” changed the music we listened to forever. I was hooked. Then came Elvis, Jerry Lee Lewis, Chuck Berry, Fats Domino, and the rest is history. Every Saturday I would walk downtown to Lindstrom’s Record store and listen to the latest hits and always come home with at least one new 45. In my bedroom next to my bed was my radio that I would listen to every night just to hear the newest songs. Radio at that time was AM only and at night, with less interference in the airwaves, I could pick up a station from Little Rock which was about 600 miles from where I lived. The commercial that I will never forget was for White Rose Petroleum Jelly. I was so excited the night I heard the song “Sea Cruise” that I ran down to Lindstrom’s to buy it, only to find out that it wasn’t available yet.

My parents did not like Rock n Roll and would say it sounds like noise. They did, however, “put up” with it and allowed me to play my record player as loud as it would go which was not very loud when compared to today’s stereos. Now we have a stereo in the living room, a portable stereo in the garage complete with subwoofer, subwoofers on our computers, and a subwoofer in the car. My love for music has stayed with me and the music and the equipment to play it with just keeps getting better. 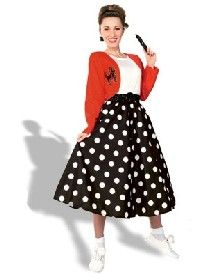 Cuffed Bobbie socks were worn with suede “buckskin” shoes or saddle shoes that came in all color combinations and styles from lightweight to the original heavier oxford in black and white. The sleeves were always cuffed and rolled on the girls’ short sleeve shirts and finished off with a scarf around the neck.

Wool skirts with the length at the middle of the calf with a slit in the back. The favorite hairstyles were ponytails and shoulder-length hair that was rolled at the ends with bangs and usually a side part. Barrettes were often used as decoration and to hold the hair away from the face. The boys’ typical clothes were blue jeans with cuffed legs, a t-shirt with rolled sleeves or a shirt with the back of the collar turned up. They wore various short hairstyles ranging from the butch to slightly longer Elvis style that was combed back and held in place with VO5 Hair Dressing into a ducktail or DA as it was called. Going to church on Easter Sunday was a sight to behold! All the women and young girls (me included) wore a hat adorned with artificial flowers along with white gloves.

I wasn’t much into dolls as a child because I preferred to be outside exploring or making something with my hands. The one doll that I did enjoy for a short time was the Ginny Doll that is tucked away in a closet complete with all the clothes, accessories, and furniture along with a Toni Doll still in the original box almost untouched. The Toni Doll was a Christmas gift and I was evidently at the age that it just didn’t interest me much. Easy Bake Oven has been around for 50 plus years as I was given one for Christmas when I was 8 years old and made and ate all the cakes the first night. Needless to say, I got very sick later that night! One of my weekly downtown stops was the local Hobby Shop that sold Paint by Number products. I would sit at a desk in the sunroom and paint for hours. I painted a black tole wastebasket and Kleenex box holder that was given to my Mother as a gift. They also sold magic tricks that fascinated me and I would give magic shows at home on the piano bench covered with a black antique crazy quilt. Two other toys I have fond memories of was the Hula Hoop and the Slinky.

The old motels are now a thing of the past having been replaced with travel hotels. More rooms in a smaller space, but not as convenient as the motels where you would park right in front of your room. When our family would take car trips we would see the Burma-Shave signs along the road and read them out loud as we passed them.

If computers had come along 45 years sooner, I think my life would have been very different. Oh well, better late than never.

About the Author:   Barbara Wangelid, along with her husband Tobbe, are the owners of Jack and Friends, where you can purchase vintage and retro reproduction signs, enamelware, antique labels, 1950’s retro, Crosley Radio replicas, and classic pedal cars.