New Amsterdam by Nicolaes Visscher in 1656

For the first 20 years after their discovery of New York, the Dutch possessions on the Hudson River had much more the character of a trading-post than that of a colony. Holland was at that time becoming a nation of merchants, and such was the growth of trade at New Amsterdam that in 1632 the exports amounted to the very considerable sum of $57,000. In 1629 a grand scheme for colonizing the Dutch territories in America was formed in Holland. Liberty was given to the members of the Dutch West India Company to plant colonies in New Netherland on certain easy conditions. It was decreed, that whoever should, within four years after giving notice of his purpose to do so, form a settlement of not less than 50 persons of 15 years old and over, should be entitled to occupy and possess a tract of land 16 miles in extent, along the seashore, or the bank of any navigable river, (or 8 miles when both banks were occupied,) with an indefinite extent inland. The persons who formed colonies under this provision were called patroons and were entrusted with large powers within their several manors, both as proprietors and as civil magistrates. 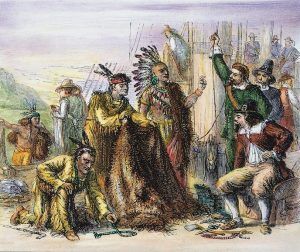 Dutch Fur Trade with the Indians

Under this system of colonization the lands about the bay, and on both sides of the Hudson River, were speedily taken up by the more enterprising members of the Dutch West India Company. The island of Manhattan, however, was wisely reserved for the use of the company. The patroons, in order to secure the lands they had appropriated, made great efforts to obtain the requisite number of colonists. Some were obtained by emigrations from Holland, and some from the English colonies. To forward this purpose, liberal conditions were offered by the patroons; and, following the example of the home government, the colonial authorities granted full toleration to all Christian sects.

In 1633 the little colony of New Netherland received a governor from the fatherland — Wouter Van Twiller and the scattered settlements and trading-posts on the Hudson River were erected into a province of the United Netherlands. The new governor brought over with him a company of 104  soldiers, a school-master, and a minister. But, as the trade with the Indians was the all-engrossing matter of interest, little was done toward introducing permanent settlers into the province. The governor, however, applied himself vigorously to his public duties, and several improvements were undertaken. The fort was rebuilt, with barracks for the soldiers; a church and parsonage were erected, and also a house for the governor, and mills and other buildings necessary for the welfare of the settlement. The island of Manhattan was divided into farms, called “boweries,” and on the one nearest to the fort, the governor had a dwelling, barn, brewery, and boat-house built. Buildings were also erected on some of the other “boweries” of the company.

During the whole term of Van Twiller’s administration, the little colony was in a state of disquiet or alarm. On the east, the English were steadily encroaching on the territory of the company, and on the Delaware River, the Indians were carrying on a destructive war against the feeble settlements. Nor were the internal affairs of the government less troublesome. Between the government and the patroons, continual disputes were kept up, as to their respective rights, and especially as to the privilege of trading with the Indians, of which both parties claimed a monopoly. At the same time, the governor was not altogether forgetful of his private interests. In company with several others, he purchased from the Indians a fertile tract of land on Nassau or Long Island, upon which the new proprietors proceeded to establish farms. He also purchased, for his own use, the little island just south of the fort, originally called Nutten Island, from the great number of nut-trees found on it; but, from its being the property of Governor Van Twiller, it has since been known as Governor’s Island. But, the discontent that prevailed in the colony eventually came to the notice of the company, and, from the character of the complaints, it was deemed best to recall the governor after an administration of four years. 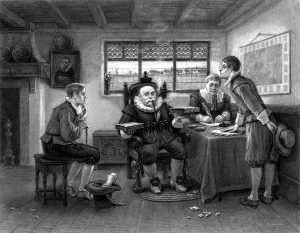 The judgement of Wouter Van Twiller

The new governor, William Kieft, did not arrive in the colony until March 1638. He then found the company’s affairs much neglected, and the public property in a ruinous condition — the buildings going to decay, — the boweries or farms untenanted and stripped of their stock, and the purchase of furs, which constituted the principal objective in the colony, engrossed by private traders, and conducted in a most profligate manner. The new governor endeavored by orders and proclamations to remedy these evils, but with only partial success. A few additional settlers were also brought into the province about this time, and some further purchases of land from the Indians were made, but the growth of the settlements was as yet inconsiderable.

About this time Peter Minuets, the former director of New Amsterdam, with a company of Swedes, under the patronage of Queen Christina, entered the Delaware River and purchased of the Indians a tract of land on the western side of the bay, and built Fort Christina. Kieft was greatly dissatisfied with this intrusion upon territory claimed by the Dutch West India Company, and, by repeated and violent protests, to which Minuets paid no attention, forbade the intended settlement. But, the Dutch governor deemed it unsafe to attempt to dislodge the intruders by force, and the power of Sweden in the affairs of Europe was such as to forbid the home government interfering in the matter. So, the little Swedish colony was left to pursue its course in peace.

The little progress made by the colony, at length, induced the directors of the West India Company to mitigate some of the rigors of their policy. The monopoly of the trade to the colony was so far modified as to permit any who might choose to do so to engage in it; though only the company’s ships could be used for transportation. A free passage was given to all who wished to move from Holland to the colony; and emigrants were offered lands, houses, cattle, and farming tools, at an annual rent, and clothes and provisions on credit. The authority of the patroons was defined and somewhat diminished. To every person who should bring six persons into the colony, 200 acres of land were to be given; and the towns and villages were to have magistrates of their own. Other provisions of a similar character were made, regulating the trade with the Indians, and also providing for the religious and educational wants of the people. 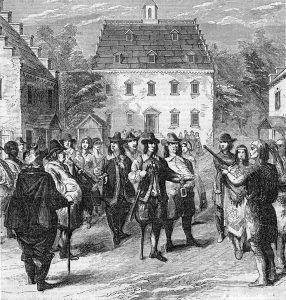 Under the new arrangements, a number of emigrants were drawn from Holland, some of the men of considerable property. Some English indentured servants, who had served out their time in Virginia, also settled in New Netherland; and some Anabaptists and others, who had been driven out of New England by religious intolerance, sought here a place of safety. The settlements were now rapidly extended in every direction around New Amsterdam. On Long Island, in addition to the settlements at Wallatout and Flatlands, another was commenced in 1639 at Breukelen [Brooklyn]. Staten Island and the region to the west of Newark Bay were both granted to patrons, and settlements commenced upon them. New Amsterdam shared only indirectly in these improvements, but, its progress, was slow, though steadily onward. “A fine stone tavern,” says an old chronicler, was built, and the “mean old barn” that had served for a church, was replaced by a new stone building, erected within the enclosure of the fort, and paid for partly by the company, and partly by subscription.

The foreign relations of New Netherland became, by degrees, more and more complicated and embarrassing. The encroachments from the New England colonies were becoming truly alarming; and, on the south, the Swedes were firmly seated in their position, and threatened to exclude the Dutch entirely from their possessions on the Delaware River. The growing importance of the colony of Eensselaerwick (Albany), at the north, which began to assume a kind of independence, became a further cause of uneasiness. These difficulties, however, though sufficiently embarrassing, were not the worst that the governor had to oppose. A more terrible calamity than any of these presently threatened the colony, from a nearer and much more implacable enemy.