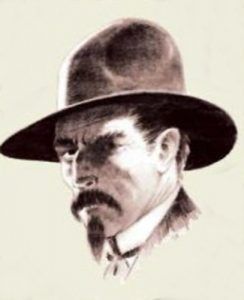 James L. Smith, artist’s rendition from the cover of Whispering Smith: His Life and Misadventures by Allen P. Bristow, 2007. Click for purchase via Amazon.

Whispering Smith, as James L. Smith was to become known, served in the U. S. Navy during the Civil War aboard an ironclad gunboat in the Mississippi River campaign. After the war, he remained in that area as a Plantation Inspector for the Freedmen’s Bureau and investigated crimes committed against former slaves.

When the New Orleans Metropolitan Police were formed, Smith was appointed as a detective and served for several years until he was involved in a shooting that resulted in a scandal. He and his wife fled to Omaha where he was employed as a Union Pacific Railroad detective and later served in the Cheyenne and Black Hills area. During this period he was involved in the shooting of two adversaries and implicated in the lynching of two others. It was during this period that he acquired the nickname, “Whispering Smith.”

Terminated by the Union Pacific, Smith moved to the Mescalero Indian Reservation in New Mexico where he was appointed as Chief of Indian Police. He was active in capturing outlaw tribal members and shot two during a raid on a rustler’s camp.

Reservation politics and governmental criticism forced his resignation but not before he unsuccessfully challenged Pat Garrett to a duel. Smith returned to Cheyenne where he was employed as a stock detective by the Wyoming Stock Growers Association. The secretive nature of this work obscures the number of his shooting events but he was suspected of participating in several lynching. One event became public knowledge when Smith arranged the contract killing of a rustler who had fled to Mexico. This was the revenge killing of an outlaw who had killed one of Smith’s fellow range detectives. 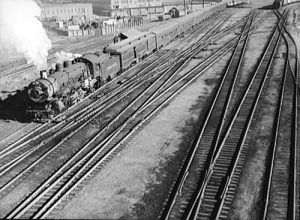 Another event in which Smith had a hand was the attempt by granger interests to elect fence laws in Nebraska. Whispering Smith scoured Wyoming and Nebraska for ranch hands that could be fraudulently moved into the election districts to defeat the legislation. The effort failed. Blizzard conditions and the financial failure of the cattle industry during 1887 caused Smith to seek employment as a railroad detective with the Northern Pacific Railway.

During Smith’s employment with the Wyoming Stock Grower’s Association he was befriended by Alexander H. Swan, the “Cattle King” of Cheyenne. Swan had financial involvement with a Utah short-line railroad corporation at Ogden and sought revenge against an associate who was suspected of fraud. Swan convinced Smith to resign from the Northern Pacific to conduct an investigation and launch a vendetta against the culprit, John R. Middlemiss. Smith, acting as a private detective, began to gather evidence and circulated an inquiry letter to Utah and California police departments. Parts of Smith’s letters were held to be criminal libel and he was so charged in court. A jury found him guilty and the judge fined him but the Swan interests paid it.

By 1891 Smith, apparently tired of stress, became a prospector for mineral deposits in Utah. He was successful and located several claims. After settling legal disputes over them he sold these properties to the Pleasant Valley Coal Company at Castle Gate and again became a railroad detective, this time with the Denver & Rio Grande. That railroad had as one of its best customers the Pleasant Valley Coal Company to whom Whispering Smith had sold his mining claims. That company soon hired Smith as their security officer.

The Castle Gate area was infested with outlaws and the Carbon County Sheriff, Gus Donant, was thought to be corrupted. When Donant tried to have C. L. “Gunplay” Maxwell, a known rustler, appointed as his deputy, Whispering Smith launched a campaign to have Donant removed. The effort was eventually successful but placed Smith into a continuing conflict with two local attorneys, J. W. Warf and M. P. Braffet. 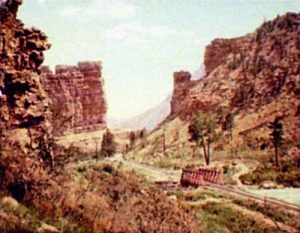 In April 1897, The Pleasant Valley Coal Company payroll was robbed by Butch Cassidy and members of his gang. Smith and his friend Cyrus “Doc” Shores were involved in the investigation but without success.

The verbal feud between Smith, Warf, and Braffet continued throughout the year and was climaxed by a gunfight at the Denver & Rio Grande Railway station in Price, Utah. Whispering Smith was arrested for attempted murder and tried during February 1898. He was acquitted but his employment with the Pleasant Valley Coal Company ended.

Smith then became a resident of Denver, Colorado, and was hired by a newspaper editor to drive William “Bat” Masterson out of town. Following this confrontation, and at the age of 72, Smith became a prison guard at Buena Vista, Colorado, where he shot and killed an escaped prisoner.

This incident closed Whispering Smith’s adventurous career and he retired to Denver in poor health. Destitute and ill, Smith conspired to be jailed in the Denver County Jail to receive medical aid. He committed suicide there on August 27, 1914, and was buried at the Riverside Cemetery, Section 2, Lot 205, Block 12.  Efforts are underway to obtain a Civil War headstone for his unmarked grave.

Frank H. Spearman, an unknown author, determined to write a novel about the heroic adventures of a railroad detective. He had heard the name “Whispering Smith” but knew nothing of his life. To obtain background for his story Spearman arranged to confer with two prominent railway detectives, Timothy Keliher and Joe LeFors. Based on their stories Spearman crafted a novel. His hero was named “Whispering Smith” but this fictional character was a composite of Keliher and LeFors. Spearman never met James L. Smith and the real Whispering Smith seems to have had no knowledge that his title was used.

The novel, Whispering Smith, was published in 1906, became the best-seller that year and continued in popularity for many years. Hollywood pounced on Spearman’s catchy title and repeatedly obtained filming rights. Over five motion pictures were made plus a television serial as late as 1961. Neither the novel nor the films based on it relate to the actual adventures of Whispering Smith.

Whispering Smith: His Life and Misadventures by Allen P. Bristow, 2007. Click for purchase via Amazon.

About the Author:  This article was submitted by Allen P. Bristow, who wrote the book Whispering Smith: His Life and Misadventures, published by Sunstone Press of Santa Fe, New Mexico. Bristow’s work documents in detail the adventures of James L. Smith. A reprint of the original Whispering Smith by Frank H. Spearman will also be available from Sunstone Press.