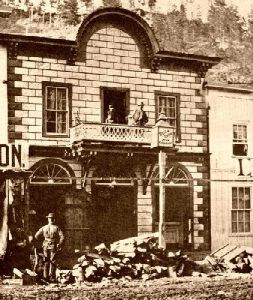 Bella Union Theatre – Though the Bella Union did exist in Deadwood it was not a wild and wooly gambling hall, but actually advertised itself as “Entertainment for ladies and families” and “Entertainment without ordinary vulgarities of show.” The Bella Union was also not owned and operated by Cy Tolliver, but rather a man named Tom Miller. Though more “upscale” than the other entertainment venues in the camp, it did, however, offer liquor and a few gambling tables.

Featuring stage performances, trapeze acts, wrestling tournaments, sparring expeditions, and more, The Bella Union Theatre, built by Tom Miller in 1876, was the grandest place in Deadwood. With 30′ ceilings, 3 grand entrances, 17 private boxes, and stretching some 120 feet in length, her grand private reception room became the central meeting place for the town folks of Deadwood. However, the Bella Union’s life was short as just two years after the Bella Union was built, Miller went bankrupt and the theatre was dismantled in November, 1878 and the scenery, properties, and fixtures sold. The large lower floor became a grocery store and storage facility, while the upper floor became a meeting room called the Mechanics Hall. Perkins and Company attempted to resurrect the theatre’s once great popularity by producing a new play in the old Mechanics Hall in January, 1879. However, as published in the Black Hills Daily Times, the town couldn’t support yet another theater by that time.

Deadwood Bank – There was obviously no bank owned an operated by Alma Garrett, as she didn’t exist. The first bank in Deadwood was actually the Stebbins, Post & Co. Bank, which opened its doors in 1877. The next year, a reorganization resulted in the creation of the First National Bank of Deadwood. There is no mention in history that either Seth Bullock or Sol Star were affiliated with the First National Bank. However, another bank was started in June, 1880, for which Seth Bullock was named President. However, just seven years later, on February 17, 1887, the bank was closed. There is also no mention that Sol Star was involved in this bank either. 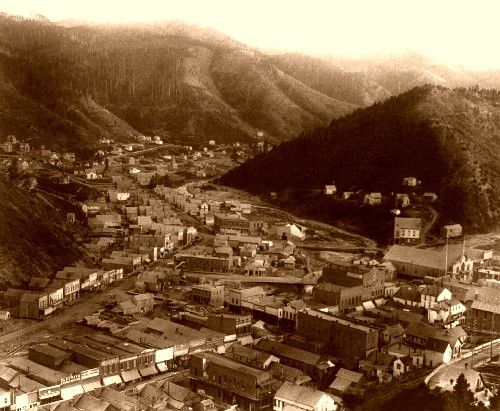 A closeup view of the town of Deadwood, South Dakota in 1888. In 1875, a miner named John B. Pearson found gold in a narrow canyon in the Northern Black Hills. This canyon became known as “Deadwood Gulch,” because of the many dead trees that lined the canyon walls. According to Colonel Richard I. Dodge, there was an estimated 800 white men mining the Hills at this time. Click for prints, downloads and products.

Gem Saloon – Actually called the Gem Variety Theater, much of Deadwood’s first season’s action is portrayed at the Gem Saloon. However, the year is 1876 and the Gem Saloon didn’t open until April of 1877. In 1876, Al Swearengen owned a very small tavern that was called the Cricket Saloon. When Swearengen did open Gem Variety Theater in 1877 it became one of the city’s most infamous amusement houses. Swearengen lured women from the East with promises of adventure in the West, but those who accepted soon found themselves the victims of a white slave trade. The Gem and its debased women soon garnered a reputation as the vilest of the vile in a city without law.

Grand Central Hotel –  This hotel did exist in Deadwood, but was never owned by E.B. Farnum, nor George Hearst, and was obviously never attempted to be purchased by Alma Garrett, since she didn’t even exist. Built by Charles H. Wagner, it was one of the first hotels to open in June, 1876. What is true in the Deadwood Series, is that Lucretia “Aunt Lou” Marchbanks was the Kitchen Manager at the Grand Central, almost from day one. In no time, the hotel, which really wasn’t so grand, was better known for its great food served in its restaurant and Lucretia Marchbanks had become better known as “Aunt Lou.” On July 4, 1876, the Grand Central Hotel hosted Deadwood’s first ball, where nine “proper” women showed up to enjoy a little dancing and Aunt Lou’s great food. Nine “proper” women was probably close to all of them in the camp at the time, as most of the “ladies” in the Deadwood’s early days, were of the “sporting” variety.

In September, General Crook visited Deadwood and stayed at the Grand Central. Two months later, yet another ball was thrown in December to celebrate the coming of the Telegraph.  Obviously successful, another story and a new front were added to the hotel in July, 1877 and shortly thereafter, Wagner retired and leased the hotel to W.H. Fanton.

When Deadwood got the first telephone exchange in the territory in March, 1878, a major celebration was held at the hotel. However, two disasters would soon strike the hotel. In April, a large thunderstorm caused major flooding of the building and a fire in the rear of the building caused much damage the same month.

After only two years of operation, the Grand Central Hotel went on the auction block July 1878. With the sale, portions of the building were leased for retail space and various managers would run the remaining facilities as a boarding house up and until the big fire of September 1879. The hotel was renovated into a 70 bed furnished lodging house and served as host to the many soldiers visiting the area from Ft. Meade. The lodging house experienced a slow decline over the years, suffering its final demise in 1892 when the building is raised to make room for new development.