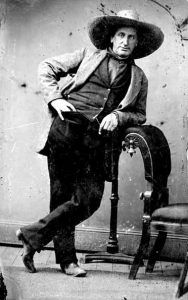 A native of New York, Jack (John) S. Langrishe, an actor, impresario, and production manager, had been operating different theatres for some 17 years before arriving in Deadwood, South Dakota, in 1876.

From 1859 through the early 1860s, the Langrishe-Allen St. Joseph Theatre Company played to Missouri and Kansas audiences in St. Joseph, Missouri, and Topeka and Junction City, Kansas.  Enacting such productions as Ten Nights in a Bar Room, Toodles, Lady of Lyons, Hamlet, Ingomar the Barbarian, Uncle Tom’s Cabin, and Othello, these and other plays would be fine-tuned before the troupe’s appearance in Deadwood.

Langrishe and his wife, Jenette, an actress and impresario, moved west in the early 1860s where they operated the Colorado Denver Theatre, along with partner Mike J. Dougherty, from 1862 to 1876.

The original two-story theatre opened in November 1861 as the Platte Valley Theater on the northeast corner of 16th and Lawrence Streets. Obviously successful, Langrishe and Dougherty bought the building in August 1862, made immediate improvements, and reopened it as the Denver Theater.

Seating about 1000 people, the theatre was a huge success.  Ever the opportunist, Langrishe made sure the “business” made money even when a production wasn’t going on. The performances actually took place on the second story, while the first floor of the building was reserved for a saloon and gambling hall. Here, the frontiersmen enjoyed various games, including Faro, poker, roulette, monte, chuck-a-luck, 24-hours a day, seven days a week.

In the late 1860s, Langrishe was ready to move on again, and the theatre was leased. The theatre’s name was changed to the Denver Opera House, but that lasted only a couple of weeks before the name reverted to the Denver Theatre. Unfortunately, the building was destroyed by fire in March 1877.

In the meantime, Langrishe and his troupe were performing in many of the mining towns of the west.  In 1870, they built the Langrishe Opera House in Helena, Montana, which operated until 1874, when it was consumed by fire.

They returned briefly to Denver before traveling once again to Deadwood in July 1876. Obviously well seasoned, he wasted no time in establishing a theatre in the thriving boomtown. Upon their arrival, the Langrishe troupe first performed in the Bella Union for a brief time before building their own theater.  Late in 1876, the Deadwood Theatre, often referred to as the McDaniels Theatre, for the builder, or the Langrishe Theatre was completed.  It was here that the trial of Jack McCall, Wild Bill Hickok’s killer, was first held.

Exchanging stage performances for gold dust, the nightly performances played to a packed house, delighting the Deadwood audiences with the latest Broadway hits, many concurrently running in New York and London.  At other times that no performance was being enacted, the new theatre building was often used for trials, receptions of distinguished visitors, funeral service, and dances.  Though other “entertainment” existed in Deadwood when the Langrishe Troupe arrived, Langrishe’s theater was the only one that any respectable lady would set foot in. 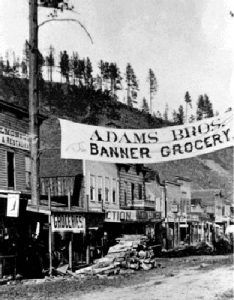 The theatre was so successful that by 1878, Jack Langrishe relocated the theatre to a larger building on Sherman Street in South Deadwood.  Its most famous star was Fanny Price, but the theatre also featured other well-known names of the time, such as Charlotte Cushman, Jim and Belle Gilbert, Augusta Chambers, Viola Porter, and more.

But, like many a mining town, the success was not to last, as, in early 1879, many of the miners began to move from Deadwood towards the next big mining strike in Leadville, Colorado. The Langrishe Theatre’s last production in Deadwood was Our American Cousin on August 14, 1879. Following the miners, the Langrishe Company also moved on to Leadville, where they performed the first show at the brand new Tabor Opera House on November 20, 1879, and continued performances through the end of the year.

In the meantime, the Langrishe Theatre in Deadwood was destroyed by the devastating Deadwood fire on September 26, 1879.

Later, Langrishe would find his way back west, where he was elected justice in Coeur d’Alene, Idaho  1886, and managed the Wardner News in 1891. 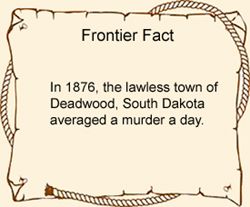