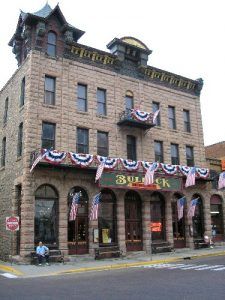 1876 saw the arrival of Seth Bullock and Sol Star to Deadwood, South Dakota. Moving their hardware store from Helena, Montana, they came in an ox-drawn wagon piled high with mining equipment, dutch ovens, frying pans, and chamber pots. On the night they arrived in the camp, Bullock began to auction equipment and supplies to the highest bidder.

That was the beginning of their successful hardware store business. Soon they bought a lot on the corner of Main and Wall Street (the current site of the Bullock Hotel), and within a year, the partners built a new store and warehouse.

Before he arrived in Deadwood, Bullock had been sheriff in Lewis and Clark County, Montana. After the death of Wild Bill Hickok in August 1876, the camp began to demand law and order, which resulted in Bullock’s appointment as the first Sheriff of Deadwood a few months later.

Tall, with steely gray eyes, Bullock had an imposing appearance that commanded instant respect. His grandson would say of him later, “He could outstare a mad cobra or a rogue elephant.”

Bullock was undaunted by Deadwood’s lawless and dangerous nature and wasted no time appointing several fearless deputies to help him “clean up” the town. Before long, order had been established in the former hell-raising camp.

Changing tactics, Bullock and his partner, Sol Star, then decided to build Deadwood’s finest hotel over the original store and warehouse. Hauling in native pink and white sandstone from Andrew’s Quarry in Boulder Canyon, building the Italianate-style hotel began. It boasted a restaurant that could seat 100 people and offered such delicacies as pheasant and lobster when it was complete. The large lobby featured red velvet carpeting, brass chandeliers, oak trim, and a Steinway grand piano. Upstairs, the 63 rooms were furnished with oak dressers and brass beds, each floor had a bathroom, and a library and parlor were located off the balcony. In no time,  the hotel was the most sought-after luxury hotel of its time. In 1900 a small building that adjoined the hotel on the South was obtained by Bullock, which served as the Gentlemen’s Bar.

Seth Bullock died of cancer on September 23, 1919, at his ranch near Belle Fourche, South Dakota. He was buried on the high trail to White Rocks above Mount Moriah Cemetery. The gravesite, facing toward Mount Roosevelt across the gulch, was selected for its view of Friendship Tower, a view since obscured by a half-century growth of ponderosa pines.

However, according to dozens of reports, Seth Bullock continues to play host at his beloved hotel. According to both staff and guests, all manner of strange occurrences has happened at the historic hotel. Reports include feelings of a strong paranormal presence inside several rooms, in the second and third-floor hallways, in Bully’s restaurant, and Seth’s Cellar. 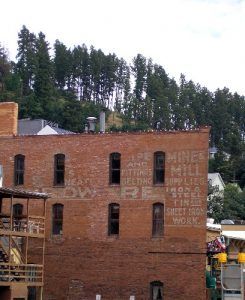 The side of the Bullock Hotel still shows the advertising used by the Star & Bullock Store, by Kathy Weiser-Alexander.

Others have reported seeing the tall ghostly figure of Bullock in various areas of the hotel, including the restaurant and the basement. Apparently, Seth’s ghost wants to ensure that the staff is working hard, as paranormal events tend to increase when staff members stand idle, whistle or hum a tune. Plates and glasses have been known to shake and take flight in the restaurant, lights and appliances turn on and off by themselves, unseen hands inexplicably move items, and showers turn on, seemingly, of their own accord.

Many guests have reported hearing their name called out by a male voice when no one is present or tapped on the shoulder by unseen hands. Others have heard whistling, and many report the sounds of footsteps in the hallways when no one is there.

In both the second and third floor rooms, guests have reported several strange occurrences, including photographs that produce strange anomalies, alarm clocks that go off, even when they are unplugged, televisions that seemingly operate with unseen hands, shadowy figures seen in rooms and hallways, and even an antique clock, that hasn’t functioned in years, that chimes of its own accord.

The Bullock Hotel has been the subject of the once-popular TV show Unsolved Mysteries.

Over the years, the historic Bullock Hotel has undergone several renovations to upgrade the hotel with modern amenities; however, it loyally maintains its historic appearance and grandeur. 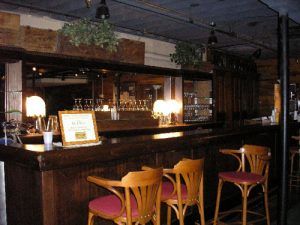 A cowboy figure in silhouette has often been spied in Seth’s Cellar, Kathy Weiser-Alexander.

Today the hotel is the most photographed building in Deadwood and still provides the most luxurious historical accommodations in the area. The Historic Bullock Hotel & Casino offers historic deluxe accommodations, 24-hour gaming action, the Gentlemen’s Bar, fine dining at Bully’s Restaurant, and Seth’s Cellar for weddings, meetings, banquets, and more.

The Bullock Hotel also offers a ghost tour for those that want to hear more of the story and see the places where paranormal activity has occurred. 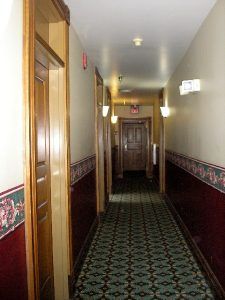