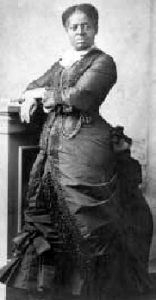 Except for “Aunt Sally” Campbell, who came with the Custer Expedition in 1874, most believe that Lucretia Marchbanks was the first black woman in the Black Hills of South Dakota.

Born a slave in Putman County, Tennessee, on March 25, 1832, Lucretia belonged to a slave owner named Martin Marchbanks, whose father had settled east of Algood, Tennessee. Lucretia’s father was half African American and half white and the half brother of Martin Marchbanks. Before the Civil War even began, her father was able to purchase his freedom for $700, which he had spent years very carefully saving.

Lucretia grew up on the Marchbanks plantation, the oldest of eleven children, where she was trained in cooking and housekeeping. She was “given” to Marchbanks’ oldest daughter, who she traveled west with before the Civil War. Once the Emancipation Proclamation freed her, Lucretia continued to travel, spending time in California, before returning to Tennessee. However, having gotten a taste of the West, she soon headed that way again, working in the gold camps of Colorado before being lured by the reports of gold in the Black Hills. Arriving in Deadwood on June 1, 1876, she soon found work as the Kitchen Manager in the Grand Central Hotel. In no time, the hotel, which wasn’t so grand, was better known for the great food served in its restaurant, and Lucretia had become known as “Aunt Lou” in Deadwood Gulch.

But Lucretia was more than just a friendly face with great cooking talents; she was also a tough manager and brooked no intimidation from her customers. One day she proved that when a Mexican man came into the restaurant boasting that he had killed an Indian and acting as though he’d like to kill someone else. As the nervous customers looked on, Aunt Lou soon confronted him while brandishing a large knife, and in no time, the stranger took his leave.

Two years later, she was offered a better position working as a cook for the Golden Gate Mine in nearby Lead. Word of her culinary skills continued to spread, and she was soon lured away again as a cook and housekeeper for a boarding house owned by Harry Gregg in Sawpit Gulch, also in Lead. Catering to the DeSmet Mineworkers, one story tells that when she was late from a meeting, she could fix supper for the miners in 25 minutes, plus fixing lunch buckets for those on the night shift.

During her tenure at Gregg’s boarding house, she made some $40 per month. But like her father, she was a frugal woman and saved nearly every dime.

By 1883, Aunt Lou had earned a reputation as the best cook in the Black Hills and, having carefully saved her money, soon opened her own establishment called the Rustic Hotel in Sawpit Gulch. The hotel’s restaurant, which was more of a boarding house, was soon overrun with customers.

Excelling at making plum puddings as well as numerous other culinary delights, one of her boarders once asked for a recipe, her reply was, “Oh, just a handful of this and a handful of that.”

Her legendary cooking skills became so widespread that the New York Stock Exchange, in discussing a Black Hills Mining News article, asked “Who is Aunt Lou?” The Black Hills Daily Times soon answered in a commentary entitled “We’ll Tell You Who She Is,” which read:

Aunt Lou is an old and respected colored lady who has had charge of the superintendent’s establishment of the DeSmet mine as a housekeeper, cook, and superintendent of all superintendents who have ever been employed at the mine. Her accomplishments as a culinary artist are beyond all praise. She rules the house where she presides with autocratic power by Divine right, brooking no cavil or presumptuous interference. The superintendent may be a big man in the mines or the mill, but the moment he sets foot within her realm he is but a meek and ordinary mortal.

A skillful nurse as well as a fine cook and housekeeper, her services to the victims of mountain fever never have received an infinitesimal part of the praise to which they are richly entitled.” 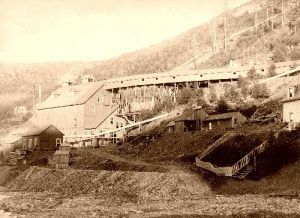 On another occasion, during a festival to raise money for the Congregational Church in 1880, the prize of a diamond ring was raffled off and given to the most popular woman in the Black Hills. Though many popular white women competed against her for the honor, men and women alike voted for Aunt Lou, who easily won the coveted prize.

Continuing to accumulate her hard-earned money, Aunt Lou decided that she had cooked long enough and sold the Rustic Hotel in 1885 to a Mrs. A.M. Porter. She soon purchased a ranch in between Sundance and Beulah, Wyoming. There, she was actively engaged in raising horses and cattle with the help of a hired a man named George Baggely, who worked for her for the next 20 years.

Lucretia “Aunt Lou” Marchbanks died in 1911 and is buried in the little cemetery in Beulah, Wyoming.