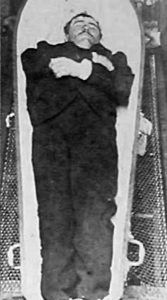 Oliver “Ol” Yantis was an Oklahoma outlaw that rode with the Doolin-Dalton Gang.

Born in Kentucky, Oliver made his way to Oklahoma somewhere along the line where he worked as a cotton farmer near Orlando.

Unfortunately, he made the acquaintance of George “Bitter Creek” Newcomb, who soon recruited him into the Doolin-Dalton Gang. He was with the gang when they robbed a train in Caney, Kansas on October 14, 1892, and again participated in the Spearville, Kansas bank robbery just a few weeks later on November 1st. After the bank robbery, the gang split up as many of them had bounties of their head for as high as $5,000 “dead or alive.”

With the law hot on their trail, Yantis was first trailed to the McGinn farm near Dodge City, Kansas by Ford County, Kansas Sheriff Chalkey Beeson and U.S. Deputy Marshal Thomas Hueston, but by the time the officers arrived, Yantis was already gone. The fugitive then headed to Hissister’s ranch south of Orlando, Oklahoma.

Still trailed by U.S. Deputy Marshal Thomas Hueston, along with fellow Deputy Marshals Heck Thomas and Chris Madsen, the lawmen caught up with him on November 29th. Announcing themselves and demanding his surrender, Yantis walked out as if he were going to comply. However, he then pulled out a pistol and began to fire on the officers who returned the shots, hitting Yantis in the leg and stomach. Though the lawmen nursed his wounds, Yantis died the next day. He was buried in the Rose Lawn Cemetery south of Mulhall, Oklahoma.