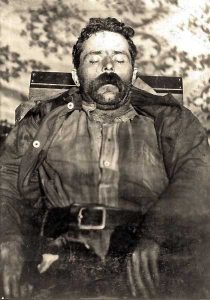 Richard “Little Dick” West was an outlaw who rode with Bill Doolin and the Oklahombres in Oklahoma.

West is thought to have been born in Texas in about 1860 and as a child he was found wandering on the open range in North Texas and raised by his finders. When he grew up, he was a short man standing only about 5’1″, hence, the name “Little Dick.”

Somewhere along the line, he migrated to Oklahoma as a hired hand on a trail drive and later worked as a cowboy on the Halsell Ranch in Oklahoma Territory. It was here Dick West met Bill Doolin and joined the gang in 1892.

He was with the gang when they robbed the bank in Southwest City, Missouri, but as the gang was mounting their horses and preparing to leave, an alarm was sounded and a gunfight erupted. In the melee, two innocent bystanders were shot, one of them died and the other wounded. Dick West also took a shot, but he survived and continued to ride with the gang until Bill Doolin was killed in 1896.

The next year, West helped to form the Jennings Gang, along with brothers Al and Frank Jennings, and the group made a number of bungled robbery attempts, including trying to rob trains at Edmond, Bond Switch, and Chickasaw, Oklahoma. They were also unsuccessful in a bank robbery attempt in Minco, Oklahoma. After failing miserably, the gang broke up and though the other four members were caught and sentenced to jail in 1897, West remained on the lam until the next year.

Pursued by the “Three Guardsmen” — Bill Tilghman, Heck Thomas, and Chris Madsen, the lawmen finally tracked him down near Guthrie, Oklahoma. On April 13, 1898, when he was approached by Thomas and Tilghman, he refused to surrender and in the ultimate gunfight that took place, he was killed. He is buried in the Summit View Cemetery in Guthrie, Oklahoma near Bill Doolin.