When traveling Route 66, the path from Webb City to Joplin, Missouri, is seamless, as Webb City has virtually become a suburb of its larger sister city.

Joplin, Missouri, the self-touted lead mining capital of the world, was first settled by the Reverend Harris G. Joplin in 1839. The minister held church services in his home for other area pioneers long before the city of Joplin was ever formed. Before the Civil War, lead was discovered in the Joplin Creek Valley, but mining operations were interrupted by the war.

In 1870, a significant lead strike occurred, which brought many miners to the area, and numerous mining camps sprang up. Soon, a man named John C. Cox filed a townsite plan on the east side of the valley, which was quickly populated by several new businesses. The town was named for Joplin Creek, which was called such, after the Reverend Harris G. Joplin.

Soon afterward, a Carthage resident named Patrick Murphy filed another town plan on the valley’s west side, calling it Murphysburg. Before long, a fierce rivalry sprang up between the two towns, but before it could get out of hand, the Missouri State General Assembly combined the municipalities in 1873. That same year, the city of Joplin was incorporated. Today, Murphysburg is a historic residential district of Joplin. It encompasses Sergeant Avenue from First Street to Seventh Street and Moffet Avenue from First Street to Fourth Street. 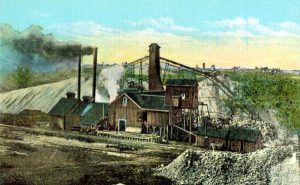 Lead mine in Joplin, Missouri.

With the large influx of miners, Joplin became a wild town, filled with saloons, dance halls, gambling establishments, and brothels — so much so that press referred to the city as being in the midst of a “Reign of Terror.” However, the riches of the mining fields also drew investors and speculators, and a need for a  banking institution was obvious. Though Patrick Murphy had lost his bid for the new city of Murphysburg, he saw the opportunity and stepped up to the plate, forming the Banking House of Patrick Murphy in 1875. Situated in a 2-story brick building on Main Street between Second and Third Streets, his enterprise was a huge success. By 1880, the city had grown to more than 7,000 people.

While Joplin was first put on the map by lead, zinc, often referred to as “jack,” built the town. Joplin was on the verge of dramatic growth with the railroads passing through the area. What began as a simple mining town was soon filled with smelters, mines, large homes, businesses, and the ever-present saloons, the most popular of which was the House of Lords, which featured a bar and restaurant on its first floor, gambling on the second, and a brothel on the third floor. 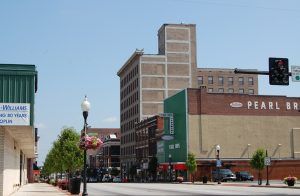 In 1897, soaring prices and continued active demand produced large profits for mines in the Joplin District, and the following year was one of the most prosperous in the history of zinc mining. These profits attracted the attention of wealthy Eastern investors, and in 1899, a group of Boston capitalists formed a corporation called American Zinc, Lead, and Smelting Company. As it was commonly known, American Zinc became one of the major players in the Tri-State Mining District.

By the turn of the century, Joplin was quickly becoming the center of the mining activity for the Tri-State Mining District, which consisted of Missouri, Kansas, and Oklahoma. By this time, the city boasted more than 26,000 people. Construction centered around Main Street, with many bars, hotels, and fine homes nearby. Trolley and rail lines made Joplin the hub of southwest Missouri, and as the center of the Tri-state district, it soon became the lead and zinc capital of the world. Lead, specifically zinc, created and would sustain Joplin’s economy for more than seven decades.

During World War I, the mines thrived, providing mineral materials for the war effort. However, when the war was over in 1918, the mining industry declined because of the low price of ore and the discovery of richer ore pockets in Oklahoma. By 1920, its population had also declined from the previous decade, but not dramatically — losing about 7%.

In 1926, Route 66 made its way through Joplin, traveling from Webb City along Range Line Road (US-71 Business Route) before zig-zagging through town along Zora St., Florida Ave., Utica St., Euclid Ave., Saint Louis Ave., and  7th St. (MO-66, BL-44). All manner of service businesses began to sprout up to serve the travelers along the route. 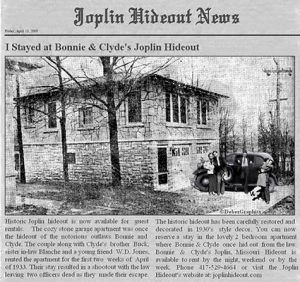 Newspaper story on the Joplin hideout.

In 1933, the city became the temporary home of none other than the notorious outlaws Bonnie and Clyde. Spending several weeks in Joplin, plying their robbery trade at several local businesses. When tipped off by a neighbor, the Joplin Police Department attempted to apprehend the pair at their hideout, located at 34th Street and Oak Ridge Drive.

However, the pair escaped after killing Newton County Constable John Wesley Harryman and Joplin Police Detective Harry McGinnis. Today, this historic apartment, called the Joplin Hideout, has been restored and decorated in 1930’s era decor. It can now be rented by visitors by night, weekend, or by the week.

After World War II, most of the mines were closed, and the population growth leveled off; however, this became the time of the most extensive travel along Route 66, as Americans found themselves with more leisure time than ever before. Unfortunately, in the 1960s and 1970s, nearly 40 acres of the city’s downtown were razed in the name of progress. Some of these included the Connor and Keystone Hotels and several Route 66 landmarks. 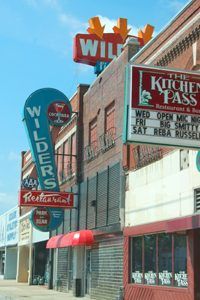 However, many historic views still exist, including the Newman Mercantile Store building, a landmark since 1910 and now called home to Joplin’s City Hall, the Frisco Depot, a one time Harvey House and Railroad office building that has been converted to apartments, as well as the Union Depot, and the Fox Theater. Where the House of Lords Saloon once stood at 407 Main Street, there is now a small park with the “Lucky Miner” statue.

On May 6, 1971, Joplin was struck by a severe tornado resulting in one death and 50 injuries, along with significant damage to many houses and businesses. Unfortunately, it wouldn’t be the last time. On May 22, 2011, the city was struck by an even more devastating tornado, killing at least 158 people, injuring 1,150 others, and causing damages of $2.8 Billion. It was the deadliest tornado strike in the U.S. since 1947, the seventh deadliest overall on record, and the costliest single tornado in U.S. History (as of 2012).

Today, Joplin is called home to about 50,000 people. At the Joplin Museum Complex in Schifferdecker Park, two museums tell the story of Joplin’s history. The Dorothea B. Hoover Historical Museum displays various historic items, including a 1927 fire engine. The Tri-State Mineral Museum houses one of the world’s largest collections of lead and zinc ore, as well as mining tools and equipment. Both are located at Fourth Street and Schifferdecker Avenue. The historic Dale’s Route 66 Barber Shop sits on the corner of Utica St. and Euclid Avenue, and numerous vintage signs can be seen along or nearby the old Mother Road.

As you head out of Joplin, you will glimpse several old vintage pubs along the short drive to the Kansas State line and on to Galena, Kansas. 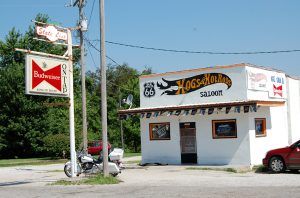 Stateline Bar between Joplin and Galena, Kansas, by Kathy Alexander.