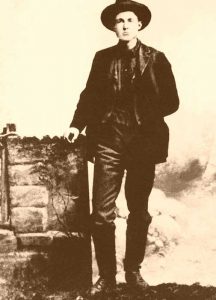 Daniel “Dynamite Dick” Clifton was already a wanted man before joining the Doolin Gang in 1892. Having committed robbery, safecracking, and cattle rustling in Oklahoma, lawmen were constantly on his tail.

Two stories tell of his nickname, one that he gained when he blew himself out of the side of a moving train while trying to crack a safe. The other, simpler tale says that he lost three fingers while playing with dynamite as a child.

Upon joining the Doolin Gang, Clifton supplied the firepower to the gang and took part in the remainder of their robberies. In an 1893 gunfight with law enforcement at Ingalls, Oklahoma, he was wounded, but that didn’t stop the outlaw. On May 20, 1895, he, Bill Doolin, and Bill Dalton robbed a bank in Southwest City, Missouri, killing J.C. Seaborn before escaping. The following year, both Doolin and Clifton were behind bars in Guthrie, Oklahoma, but after gaining control over a prison guard, they made their escape, along with 13 other prisoners.

Holing up at a farm outside of Newkirk, Oklahoma, he was trapped there on December 4, 1896, by U.S. Deputy Marshals George Lawson and Hess Bussey. As he tried to escape, he was shot down and killed. Clifton was buried at the government’s expense in the town cemetery at Muskogee, Oklahoma.