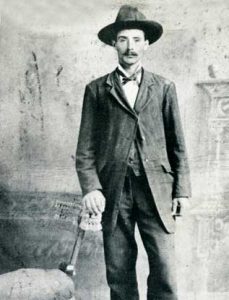 Roy Daugherty, aka: Arkansas Tom Jones, was an outlaw member of the Doolin Gang in Oklahoma and was killed in a gunfight when he resisted arrest.

Daughtery was born in about 1870 and raised in a highly religious family in Missouri. His two brothers became preachers, but Roy rebelled against the atmosphere and fled from home when he was only 14 years old. Making his way to Oklahoma, he called himself “Arkansas Tom Jones,” claiming to be from there. He first took a job as a cowboy but soon joined Bill Doolin’s gang and was captured after the shootout at Ingalls, Oklahoma on September 1, 1893.

Convicted of manslaughter, he was sentenced to a fifty-year prison term. Due to the efforts of this ministering brothers, he obtained parole in 1910. He then ran a restaurant in Drumright, Oklahoma, for two years, but bored with that he drifted to Hollywood, California, hoping to act in Westerns. That not panning out, he returned to robbery and helped in robbing a bank in Neosho, Missouri in 1917. Again, he was caught and imprisoned but released in 1921. Evidently, this man could just not be rehabilitated because he robbed a bank once more in Ashbury, Missouri the same year he was released. He remained a wanted man for the next three years but was tracked to Joplin, Missouri on August 16, 1924, and was killed in a gunfight while resisting arrest.