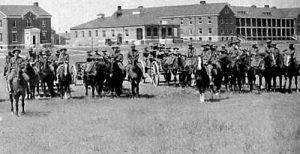 Fort David A. Russell, now known as Fort Francis E. Warren Air Force Base, was first established in 1867 and named in honor of David Allen Russell, a Civil War general killed at the Battle of Opequon in Virginia. When the railroad established its mountain region headquarters at Crow Creek Crossing, later known as Cheyenne, Wyoming, the U.S. Cavalry moved from temporary headquarters in Cheyenne to a point three miles west to establish the fort in July.

Fort Russell was made a permanent post in 1884 due to its strategic location and the following year, the War Department ordered the post be rebuilt to serve eight infantry companies.

The troops then built 27 red brick buildings to replace the older wood-frame structures. By the turn of the 20th Century, Fort D. A. Russell was one of the largest cavalry bases in the United States and several more expansions in the early 20th century further increased its size.

In 1919, the airfield became active and soon served as the home field for over 100 military aircraft. The last cavalry units on the post were deactivated in 1927. In 1930, the base was renamed Fort Francis E. Warren, in honor of the Medal of Honor recipient who served as Wyoming Governor. During World War II, Fort Francis E. Warren served as a training facility for the US Army Quartermaster Corps and a prisoner of war camp was also constructed on the site.

In 1949, the base was re-designated the Francis E. Warren Air Force Base and became part of the Strategic Air Command in 1958. The base became the headquarters for the 90th Strategic Missile Wing in 1963. In October 1993, the Twentieth Air Force relocated its headquarters to Fort Warren. 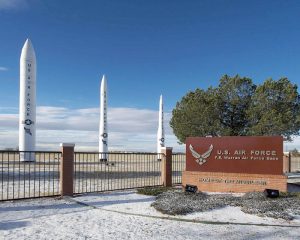 Over the years, the base served as home for numerous influential American military leaders such as Carl Spaatz, Black Jack Pershing, Billy Mitchell, Walter Reed, and Mark Clark. The fort is a designated National Historic Landmark. The active air force base, located just west of Cheyenne, Wyoming provides a museum for visitors.