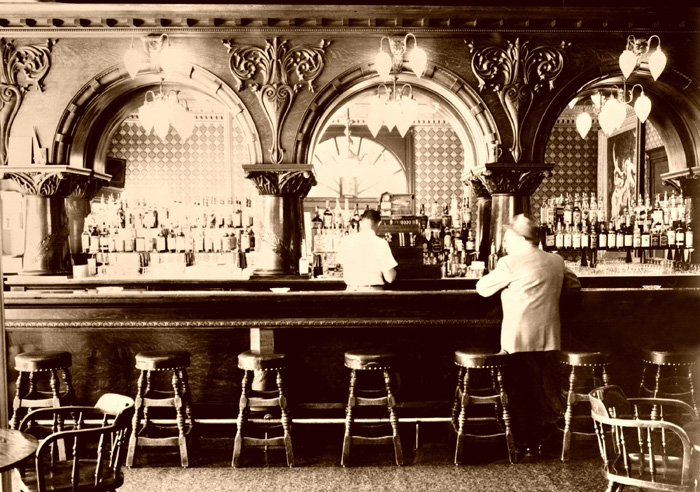 The saloon inside the popular Montana Hotel in Anaconda, Montana, was elegantly adorned. Like other saloons of the period, it featured a long wooden bar with a foot rail, but, unlike many others of the time, this one included bar stools, and no spittoons can be seen on the floor. Behind the bar, three arched mirrors are framed by ornate pedestals and carvings, and space is filled with bottles, glassware, and a cash register. Glass sconces provide lighting. A large wallpaper pattern can be seen in the mirror’s reflection, along with a painting. 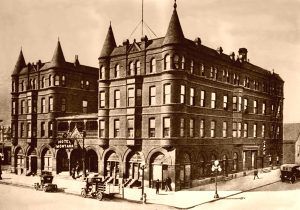 Backed by the powerful San Francisco, California syndicate of Hearst, Haggin, and Tevis, Marcus Daly built the world’s largest smelter on Warm Springs Creek between 1883 and 1889. Along with the smelters, Daly envisioned a substantial city and filed the original townsite plat on June 25, 1883. By the fall of 1884, Anaconda’s 80 buildings included seven hotels and boarding houses, and twelve saloons. In 1888, Marcus Daly and his associates established the Montana Hotel Association and began construction on the new hotel, which was completed in the spring of 1889 at an estimated cost of $125,000. Modeled after New York City’s Hoffman House, the hotel was designed by Chicago Architect W.W. Boyington, using a composite style of French Renaissance and Romanesque architecture.

The four-story structure was built of local red brick with terra cotta ornamentation and a 34 foot wide central arched entrance. The hotel interior included 185 rooms with modern amenities, like telephones, steam heat, and an electric elevator. Many rooms had canopied beds, a marble fireplace, and Persian rugs. The full basement was equipped with a servant’s dining room, a laundry, boilers, and a dynamo for electric light generation. The first and second floors finished in red oak and eastern pine, contained the main dining room, a ladies’ ordinary, a saloon, chandeliered ballroom, drug store, and barbershop. After Marcus Daly died in 1900, the Montana Hotel underwent extensive remodeling, costing $96,000 under the ownership of the Anaconda Company. 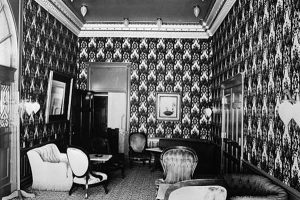 In 1954, the building was purchased by Edison and Bell, Inc. of Kalispell, Montana. The firm operated the hotel until 1959, at which time plans for demolition were considered. To combat this action, citizens of Anaconda formed the Montana Hotel Corporation and purchased the structure, renaming it the Marcus Daly Hotel. A restoration project was undertaken in 1964, and a modern motel unit was built to the rear of the original structure. In 1975, heavy financial burdens and potential bankruptcy faced the Montana Hotel Corporation. The following year, the building was sold to a local developer, and more than 2,000 hotel items were sold at auction. A year later, it stood abandoned.

Then, an aggressive program of structural renovation was begun, including the removal of the hotel’s two upper stories. The remaining space was then used for retail and office space.

Located at the corner of Park and Main Streets, there is currently a group in Anaconda that is exploring the possibility of returning the historic hotel to its former glory. 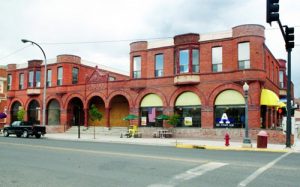