Not long after adventurers began to explore the American West, the inevitable saloons began to pop up. The first saloon was established at Brown’s Hole, Wyoming, in 1822 to serve fur trappers. In the years that followed, hundreds and thousands of saloons would follow, serving cowboys, soldiers, lumberjacks, businessmen, lawmen, outlaws, miners, and gamblers. Known by other names such as cantina, grogshop, gin mill, watering trough, and many others. By the late 1850s, the term saloon had begun to appear in directories and common usage as a term for an establishment specializing in beer and liquor sales by the drink, with food, lodging, gambling, dancing, and brothels serving as secondary businesses. By 1880, the growth of saloons was in full swing. 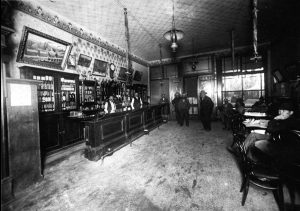 The saloon inside the Commercial Hotel in Anaheim, California, in 1910. It was located at 182 West Center Street (now Lincoln Avenue) at the corner of Lemon Street. Built by Anaheim’s second mayor, Henry Kroeger, in 1872, it was first known as the Anaheim Hotel. It was later sold to the hotel’s manager, Max Nebelung, and by 1890, the hotel’s name was changed to the Commercial Hotel.

This Vintage photograph shows two men standing behind the bar and several customers standing or seated throughout the room. Visible is the cash register, liquor bottles, and glassware in cabinets behind the bar; three spittoons along the foot-rail in front of the bar; wall clock and various pictures hanging on wall-papered walls; with lighting provided by four bare electric light bulbs and two kerosene lamps.

In 1905, the Commercial Hotel was sold to John Ziegler, who, in 1916, replaced the old hotel with a new $40,000 four-story brick building at the same location. Called the Hotel Valencia, it stood until May 1977, when it burned down. 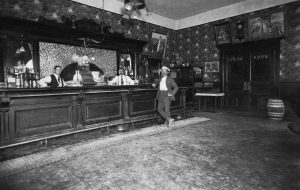 John Ziegler appears to have kept the same long bar in the original Commercial Hotel when he built the new Hotel Valencia. However, behind the bar is now a large mirror framed by ornate woodwork. In this image, a bartender and owner, John Ziegler, are behind the bar, with a customer standing at the bar rail. The cash register, liquor bottles, and glassware are visible behind the bar; two spittoons along foot-rail in front of the bar; a wooden barrel and double wooden doors leading to the dining room are at far right; a wall clock and various posters hang on wall-papered walls, and lighting is provided by four lamps hanging from the ceiling.