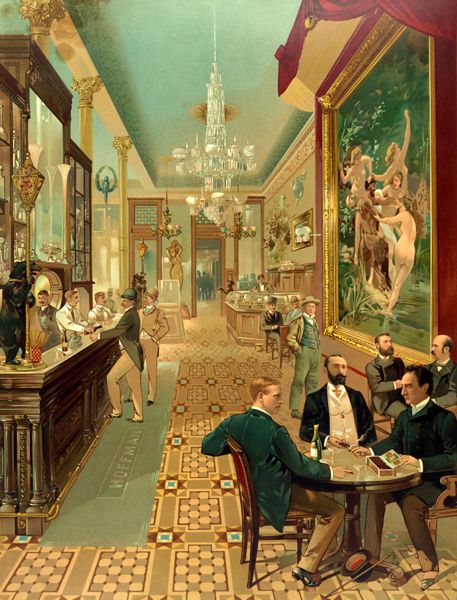 The Grand Saloon in the Hoffman House in New York City was very elegant in its day. Located on Broadway, between Twenty-fourth and Twenty-fifth Streets, the hotel’s males-only saloon was the most famous in all of New York City in the late 1800s. The plush high-ceilinged saloon measuring 50’x70′ was paneled in mahogany and displayed a long wooden, heavily carved bar, which included the customary brass-plated footrest. The floor was covered with Turkish rugs, marble and bronze statues of Eve and Bacchus stood within, and the walls were hanged with fine tapestries, said to have been made especially for Napoleon I. Also adorning the walls were several nude paintings, the most famous of which was an enormous painting called Nymphs and Satyr, by French artist Adolphe William Bouguereau. 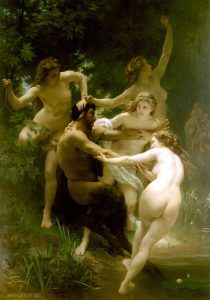 Nymphs and Satyr, by Adolphe William Bouguereau. The painting now belongs to the Sterling and
Francine Clark Art Institute.

Its most famous draw was the painting, Nymphs and Satyr, which dominated one wall and could easily be viewed in the large mirror that hung behind the bar, so customers could admire it more discreetly. The eight-foot-tall painting was situated under a red velvet canopy and lit by a large chandelier. Nymphs and Satyr depicts four voluptuous, naked young women teasing a half-human woodland creature of Greek mythology. A reproduction of the painting appeared on boxes of Hoffman House Cigars, carried all over the country. For a hefty fee, the Hoffman House would also allow its name and the painting to be used to advertising products like tobacco and whiskey. As a result, Nymphs and Satyr was replicated on saloon signs and a wide array of merchandising items. Before long, the painting became a national sensation, and anyone who came to New York just had to see it.

The Hoffman House Hotel was built in 1864 by Reed, Wall & Co. and that same year, it served as headquarters for Generals Winfield Scott and Benjamin F. Butler when they were sent to New York to help put down the bloody draft riots which threatened to sweep Manhattan into the arms of the Confederacy. It quickly became the recognized headquarters of Democratic politicians, vying with the Republicans who were headquartered on Fifth Avenue. Boss Tweed made it a sort of unofficial annex to Tammany Hall, meeting with his henchmen to plan campaign strategy.

In 1872, Cassius M. Reed was the proprietor of the Hoffman House, at which time, a handsome and flamboyant man named Edward “Ned” S. Stokes, called the hotel home. Ned Stokes, who had previously been a friend to James Fisk, known later as one of the “robber barons” of the Gilded Age, However, the friendship would end when Stokes moved in on Fisk’s mistress, Josie Mansfield, an actress of limited talent. Scandal and a sensational lawsuit followed, with charges of blackmail, extortion, and libel. After a quarrel on January 6, 1872, Stokes shot Fisk dead at the Broadway Central Hotel. He was tried, found guilty of manslaughter, and sentenced to Sing-Sing Prison for six years. Four years later, Stokes was released and resumed living at the Hoffman House. 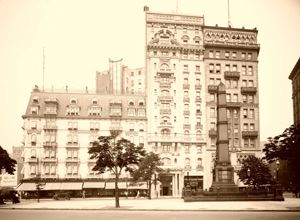 The Hoffman House and the adjoining Albemarle Hotel in 1910, just five short
years before they were torn down.

Shortly afterward, Stokes became partners with Cassius M. Reed, and the two began to embark on several ventures, including an asphalt block paving company, mining speculations, and horse racing. Even though Mrs. Reed warned her husband against this fine fellow with his smooth ways, Reed always said: “Nonsense, Ned Stokes is all right.” Stokes, also friends with another Hoffman House partner, John W. Mackay. In 1872, Ned Stokes bought a part interest in the Hoffman House with money advanced to him by his family. Until his retirement in 1897, Stokes would become the chief in the management of the hotel.

Ned’s flamboyant and voluptuous tastes soon set the tone of the Hoffman House. The gentleman’s bar, home of the Manhattan cocktail and the famous painting, Nymphs and Satyr, was its focal point. Ned had purchased the painting at a private auction for $10,000. Just a few years later, he turned down an offer of three times that much. Both the hotel and its famous Grand Saloon hosted an A-list clientele.

Grover Cleveland stopped there frequently and was living there when he was elected for his second term in 1893. The hotel would also house numerous famous people, including Ulysses S. Grant, William Randolph Hearst, William F. “Buffalo Bill” Cody, Sarah Bernhardt, and many others. Over the years, the successful hotel was expanded, including an eight-story addition in 1882 and a 12-story addition in 1907. By this time, the Hoffman House and the Albermarle Hotel next door, occupied all of the Broadway frontage. 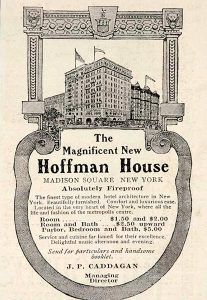 Over the next several years, investors in the hotel came and went while hotel popularity in the city began to move uptown. In October 1910, the hotel went into bankruptcy, and in April of the following year, it was announced that it would close permanently. However, creditors stepped in, and the hotel continued until 1915. At that time, it was sold to a developer for $3,500,000. The Hoffman House closed its doors forever on March 15, 1915, and the new owners took possession one month later. Beginning on May 1, 1915, both the Hoffman House and the adjoining Albemarle Hotel were razed to erect a 16-story office and loft building on the site.

Afterward, the famous Adolphe William Bouguereau painting, Nymphs and Satyr, remained hidden until 1942, when Robert Sterling Clark discovered the piece in storage. Mr. Clark first encountered the painting at the end of the nineteenth century, when it hung in the Hoffman House Hotel bar.

It was shown for the first time in decades in 1943 when one newspaper reported:

“A fabulous painting which scandalized the ’80s was seen in public last week for the first time since 1901. In Manhattan’s Durand-Ruel Galleries, visitors could look upon ‘s nearly 12-ft. masterpiece, Nymphs and Satyr. A quartet of ripe, naked maidens prancing around a preoccupied faun was for 24 years the despair of Victorian moralists and the delight of the clubmen who crowded Manhattan’s Hoffman House bar.”

Today, the painting is a permanent part of the Sterling and Francine Clark Art Institute, more commonly known as “The Clark,” located in Williamstown, Massachusetts.