Like so many other places in the Old West with violent histories, Tombstone is said to be one of the most haunted in Arizona.

The streets of Tombstone themselves are said to be the pathways of many a lingering spirit, one of which is the long-dead Marshal Fred White, who was accidentally shot by Cowboy faction leader, Curly Bill Brocius on October 28, 1880. White, the first marshal of Tombstone, had gained the respect of the Clanton Gang, and in fact, had arrested “Cowboy” members on several occasions, rarely having any problems when doing so. In the early morning of October 28th, Curly Bill and several of his cohorts were making sport by shooting up the town.

When White went to disarm the gunman, a shot was accidentally fired, hitting White in the groin. Though it was thought that he would make a full recovery, two days later, he died. Today, he is said to haunt the street in front of the shooting site, which was an empty lot where the Bird Cage Theatre was built a year later. 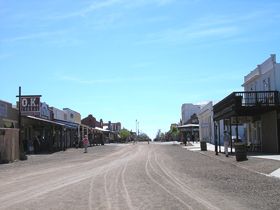 The Tombstone of today doesn’t look a whole lot different by Kathy Weiser-Alexander.

Another cowboy that of a man moving along in a long black frock coat has also been seen on several occasions. Crossing the road, the apparition is often seen near the site where Virgil Earp was ambushed and shot in the arm, crippling him for life. The spirit never makes it across the street, leading many to believe that this may be the ghost of Virgil Earp himself.

A woman in a long white dress has also been spied on Tombstone streets. One legend tells that she is a fretful mother whose child died from yellow fever in the 1880s and devastated; she later took her own life. Another version of the tale claims that she was a brothel madam who was hanged and continues to stalk to streets searching for her executioners.

Lawlessness though, was not the only cause of numerous deaths during Tombstone’s heydays. Twice it suffered terrible fires, the first in June 1881 and a second in May 1882. During these two infernos, which both wiped out significant business district areas, more than 40 men lost their lives in the crowded saloons and brothels that burned to the ground. These long-dead, suffering men are also said to make themselves known, appearing complete with drastic burns. Others have reported the smell of smoke and burning materials when there is no explainable reason. 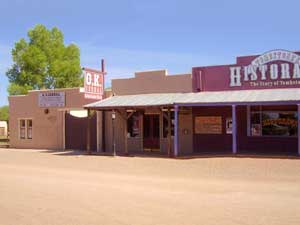 Tombstone’s most famous place – the OK Corral, was the site of the best-known gunfight in the Old West. Portrayed in dozens of western films and books, the gunfight made a legend of Wyatt Earp and brought Tombstone, Arizona fame.

After tensions had been building between the Earps and the Cowboy faction in Tombstone, for some time, Marshal Virgil Earp determined to disarm the men on October 26, 1881, resulting in the 30-second shoot out, which left Frank and Tom McLaury, as well as Billy Clanton, dead. Also involved in the gunfight for the Cowboys were Ike Clanton, Billy Claiborne, and Wes Fuller. In the Earp party were brothers Virgil, Wyatt, and Morgan, as well as Doc Holliday.

Today, the OK Corral is allegedly haunted by the Cowboys’ ghosts over the years. Several witnesses have reported seeing the fading apparitions of men dressed in cowboy attire, often appearing with guns drawn, perhaps locked into a perpetual battle with the Earps. Others have claimed to have felt numerous cold spots in various areas of the corral. 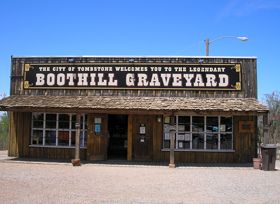 The Boot Hill Graveyard is a tourist attraction today. However, it is a real cemetery, and as such, there is no admission fee, and respect should be shown for the dead. Photo by Kathy Weiser-Alexander.

At the nearby Boot Hill Graveyard, called such because many of its occupants died with their boots on, more than 250 graves give partial stories of the Tombstone’s lawless past. Used primarily from 1878-1884, the graveyard was originally called the “Tombstone Cemetery.” Men such as those killed at the OK Corral Gunfight, Marshal Fred White killed by Curly Bill Brocius, an unfortunate soul by the name of George Johnson who was hanged by mistake, five men hanged for the vicious killings labeled the “Bisbee Massacre,” gunfighter, Charlie Storms who was killed by Luke Short, and dozens more, ranging from prospectors to outlaws, lawmen, and prostitutes. Of some who were laid to rest here, their names were never known or were only known by a nickname.

Over the years, the old cemetery fell into disrepair, with numerous old wooden tombstones falling or decomposing entirely and others being stolen by souvenir hunters. It wasn’t until the town’s first Helldorado Days, around 1929, the old cemetery began to be referred to as the Boot Hill Graveyard. Still, it continued to sit neglected until the 1940’s when an effort began to restore the cemetery.

Today it is one of Tombstone’s most popular tourist attractions. Evidently, per several legends, it also remains popular with the many dead who lie there. Visitors often report seeing strange lights and hearing unidentifiable noises coming from the old graveyard. Spirits have been spied on numerous occasions, and even more frequently are said to appear in photographs. Billy Clanton, killed in the Gunfight at the O.K. Corral, is said to rise from his grave before walking along the road back to Tombstone.

The Boot Hill Graveyard is just north of Tombstone on Highway 80. 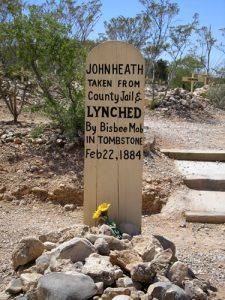 Though John Heath was lynched in Tombstone for masterminding the Bisbee Massacre, evidence shows that he was not actually buried at Boot Hill, as this marker indicates. Photo by Kathy Weiser-Alexander. 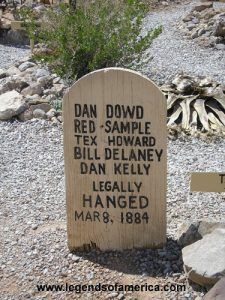 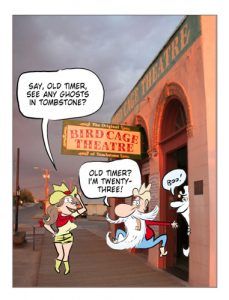 One of the oldest original buildings in Tombstone and most authentic attractions in this once-booming mining camp, the Bird Cage Theatre also has the reputation as being the most haunted place in town, allegedly continuing to host as many as 31 ghosts.

The Bird Cage was named for its 14 small “cribs” hanging from the ceiling that once housed “painted ladies,” dressed as finely feathered birds. After its opening in 1881, it quickly gained a reputation as the wildest place in town, so much so that even the far away New York Times said of it: “the Bird Cage Theatre is the wildest, wickedest night spot between Basin Street and the Barbary Coast.

Between 1881 and 1889, the Bird Cage never closed its doors 24 hours a day, as it provided gambling, drinking, and other vices to its many customers. The saloon was the scene of 26 deaths, which can be attested to by the 140 bullet holes, which can still be viewed at the Bird Cage today.

Since 1934, the old building has served as a museum owned and operated by the Hunley family. It still houses the gilded “cages,” hand-painted stage, and the original Grand Piano. Here, where tourists can walk along the floors of this historic honky-tonk, once walked the likes of Wyatt Earp and Doc Holliday. 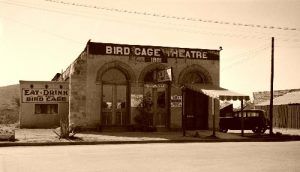 Seemingly, some of these old legends of the past continue to stalk the old saloon as both staff and guests alike have reported seeing ghostly apparitions in the 1800’s clothing. Most often sighted is the figure of a male stagehand that appears wearing black striped pants, a visor, and holding a clipboard as he walks across the stage. Other occurrences include the sounds of raucous laughter and music pouring from the old theatre’s doors at night. Others report hearing the faint sounds of a woman singing, and the museum’s sound system has inexplicably turned on of its own accord, blaring old-time music. Others have reported strange sounds coming from the main floor’s balconies and the sharp scents of cigar smoke and whiskey. After closing time, the staff has reported hearing the sounds of clinking glass and cards shuffling.

The haunting reports date back to 1921, when a school was built across the street and students began to report the sounds of laughter and music coming from the abandoned building, as well as the smell of cigar smoke. 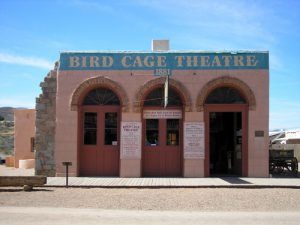 Over the years, the Hunley family, staff, and visitors alike have experienced several strange events. One of the fascinating tales is how a dice table, which weighed several hundred pounds, mysteriously moved the night before. When staff arrived the next morning, the table had been moved in front of a door with a sign that read: “Don’t Disturb Our 26 Resident Ghosts.”  The table is so heavy that it reportedly took eight men to move it back to its former position.

Another story tells of a statue of Wyatt Earp that was made and placed in one of the cribs overlooking the theatre. When it was first placed there, staff would arrive in the morning to find “Wyatt’s” hat continually knocked off and thrown into the floor below. This occurred over and over for about six months. On one occasion, staff arrived to find the statue was turned around, with its back facing the view from below. Sometime later, a local historian told the Hunley’s that they had placed the Wyatt Earp statue in the crib that was usually reserved by the Clantons.  When the statue was moved to the crib that Wyatt actually frequented when he was alike, the hat tossing finally stopped.

On another occasion, a valuable antique poker chip, which had been missing for years, suddenly reappeared on the poker table. Upon finding it there, it was locked away in a safe until historians could authenticate it. However, when the historians arrived, they were disappointed to find that the chip had suddenly gone missing again. Only after they left did it reappear in a locked desk drawer. 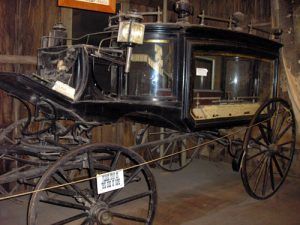 The Black Moriah hearse carried those killed at the O.K. Corral to Boot Hill. It was the first “vehicle” to ever have curved glass, is trimmed out with gold, and is reportedly worth nearly two million dollars. Photo by Kathy Weiser-Alexander. 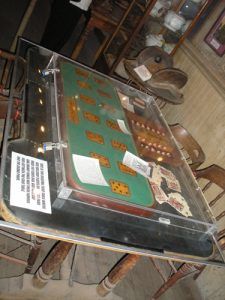 The faro table that Doc Holliday dealt cards out continues to stand in the Bird Cage Theatre, by Kathy Weiser-Alexander.

The Bird Cage Theatre has been the sight of several paranormal investigations featured on popular television programs.

The Bird Cage Theatre is located at 517 E Allen Street.