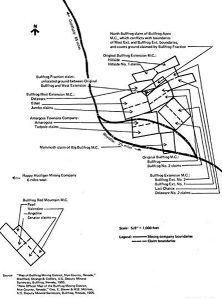 One of the first rules of the mining game is to get in on the “ground floor” in order to make money. When possible, an experienced prospector would hurry to the scene of the latest strike, locate ground as close as possible to a strike, and form a company with a similar sounding name.

Between 1905 and 1910, this game was played to perfection by a number of miners and promoters in the Bullfrog District, as 90 companies were incorporated with the magic word “Bullfrog” somewhere on their letterheads. A few of these companies were in the vicinity of the Original Bullfrog, and most, but not all, were within the boundaries of the Bullfrog District. All hoped to lure stockholders’ funds by advertising their proximity to the big strike.

Big Bullfrog Mining Company – Located south of the Original Bullfrog Mine, the Big Bullfrog was started in August 1904 when Montillus “Old Man” Beatty, a local small-time dry rancher for whom the town of Beatty was named, located the Mammoth claim.

Beatty soon sold out to a group of San Francisco financiers, who incorporated the Big Bullfrog Mining Company in 1905. Though the company owned just the one claim, they formed the usual organization, with 1,000,000 shares of stock and development began. By the end of the year, it boasted a 16-horsepower hoisting engine and a 2-horsepower blower engine for the ventilation of its 120-foot shaft. The company was described as “exhibiting good ore” in a Rhyolite newspaper. 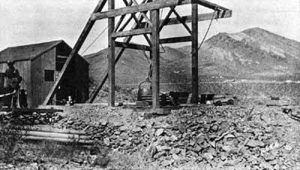 Developments continued on an optimistic level in early 1906, as the company succeeded in finding some ore which assayed as high as $180 per ton. In March the company announced that it had uncovered a body ore worth $14 a ton and excitement mounted, as it was enough to make the Big Bullfrog a paying proposition. However, the very next month the earthquake in San Francisco, California occurred and the superintendent halted work at the mine. It did not resume operation until the middle of September. The company then reported that “satisfactory progress” was being made through the rest of the year, no more ore bodies were found. By March 1907, they had still not located any more ore and stock prices began to plummet. After 1908, there was no further word from the failed venture.

Bullfrog Apex Mining and Milling Company – Incorporated on August 4, 1905, by a by a group of promoters headed by J.J. Fagan and E.L. Andrews, the company promoted itself as the owner of 15 claims, only one of which was ever worked — the North Bullfrog. But, there was a problem with the North Bullfrog claim as it intruded into the boundaries of the Delaware claim of the West Extension Company. Though the Apex Company knew about these conflicting boundaries when the North Bullfrog claim was filed,  they forged ahead anyway. Work on the Apex ground started in the fall of 1905.

In a race for other nearby companies, the Apex encountered encouraging ore values and stock sales were adequate. Confident in their claims, the promoters were confident enough that they decided to apply for a patent, which resulted in the West Extension Company to file a lawsuit against Apex. Though the dispute was tied up the courts, both companies continued to develop shafts and tunnels. But, when the Apex Company uncovered a vein of gold assaying $251 to the ton, the question was settled, and the legal battle intensified. With all the news of the legal battles, Apex suffered in the stock market and by May 1906, its stock had fallen completely off the trading board. In the end, the Apex company lost their contest on the disputed ground and soon went out of business. 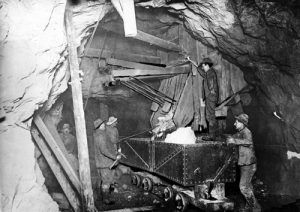 Bullfrog Extension Mining Company – On August 25-16, 1904 a group of prospectors located two claims, the Delaware #2 and the Last Chance, on the north and east sides of the Original Bullfrog Mine. Together with the Bullfrog Extension #1 and #2, on the southeast of the Original Bullfrog, these four locations were incorporated in February 1905 as the Bullfrog Extension Mining Company. Backed by San Francisco financiers, the company had enough money to begin mining in May 1905. Getting to work, a six-man crew soon sunk an inclined shaft 75 feet, and the company purchased new equipment and built a frame office building. By January of 1906, the company felt confident enough to advertise that it had a “magnificent quartz” ledge on its property which was “conservatively estimated” to be worth $500,000. However, a few months later, the promising developments were halted by the San Francisco earthquake and fire in mid-April of 1906. The mine was shut down and was idle from until June.

That same month, the company stock was selling at an all-time high, but for unknown reasons, it closed again and mining only resume in late October. By the end of 1906, although the company was still delving for ore, no significant discoveries had been made. Developments continued during the first part of 1907, as the company vainly attempted to find traces of the Bullfrog ore on its property. Though prospects initially looked good, they still didn’t find any rich ores and later that year suffered from the Panic of 1907 and their stock fell to an all-time low. The mine lay idle throughout 1908, but money was raised by 1909 and one last attempt was made to revive the fortunes of the Bullfrog Extension. Unable to raise enough money to operate on their own, they advertised for lessees in June. Successfully attracting a lessee, the new promoters once again marketed the operations to potential investors, but they were unsuccessful and the property remained idle throughout 1910. By September 1911 the company had finally given up hope, and the gas hoist and gallows frame were dismantled from the Bullfrog Extension property and shipped to Rawhide, for installation on a promising mine in that district.

Bullfrog Fraction – In December 1904, Len P.: McGarry, mining promoter, stock dealer, and president of the Bullfrog West Extension Mining Company, noticed that the ground claimed by his company did not coincide with the boundaries of the Original Bullfrog. Between the Bullfrog claim of the Original Bullfrog company and the Delaware and Ethel claims of the West Extension, there lay a parcel of land, 1.7 acres, which was unclaimed. McGarry immediately located and recorded this ground as the Bullfrog Fraction claim. Then, interestingly enough, he sold it to outside mining promoters instead of selling or deeding it to his own company. However, hardly had the new owners started to work, when their claim was disputed by the owners of the Bullfrog Apex Mining Company. Soon, the acreage was tied up in lawsuits. The Rhyolite Herald correctly surmised that the struggle would be lengthy and costly for all concerned and said. “If they fight it out someone is bound to lose, while all will be put to great expense. Think it over, gentlemen, think it over.”