The Elders say the men should look at women in a sacred way. The men should never put women down or shame them in any way. When we have problems, we should seek their counsel. We should share with them openly. A woman has intuitive thought. She has access to another system of knowledge that few men develop. She can help us understand. We must treat her in a good way. 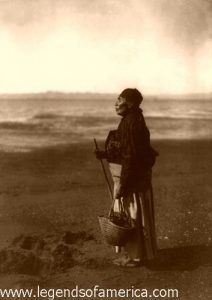 One of the most erroneous beliefs relating to the status and condition of the Native American woman is that she was, both before and after marriage, the abject slave and drudge of the men of her tribe. This view, due largely to inaccurate observation and misconception, was correct, perhaps, at times, as to a small percentage of the tribes and peoples whose social organization was of the most elementary kind, politically and ceremonially, and especially of those tribes that were nonagricultural.

Among the other Indian tribes north of Mexico, the status of women depended on complex conditions having their origin in climate, habitat, mythology, and concepts arising from the economic environment and in the character of the social and political organization.

It is one of the fundamental deductions of modern mythological research that the prevailing social, ceremonial, and governmental principles and institutions of a people are closely reflected in the forms, structure, and kind of dominion exercised by the gods of that people.

Where numerous goddesses sat on the tribal Olympus, it is safe to say that woman was highly esteemed and exercised some measure of authority. In tribes whose government was based on the clan organization, the gods were thought of as related one to another in degrees required by such an institution in which woman is supreme, exercising rights lying at the foundation of tribal society and government.

Ethical teaching and observances find their explanation not in the religious views and rites of a people but rather in the rules and principles underlying those institutions which have proved most conducive to the peace, harmony, and prosperity of the community.

In defining the status of woman, a broad distinction must be made between women who are, and women who are not, members of the tribe or community, for among most tribes, life, liberty, and the pursuit of well-being are rights belonging only to women who by birth or by the rite of adoption, are members or citizens thereof. Other women receive no consideration or respect on account of their sex, although after adoption, they were spared, as possible mothers, indiscriminate slaughter in the heat of battle, except while resisting the enemy as valiantly as their brothers and husbands, when they suffered wounds or death for their patriotism.

Among the North American aborigines dealt with here, each sex had its own peculiar sphere of duty and responsibility, and it is essential to a proper understanding of the subject, that both these spheres of activity should be considered. To protect his family, his wife or wives, their offspring and near kindred, to support them with the products of the chase, to manufacture weapons and wooden utensils, and commonly to provide suitable timbers and bark for the building of the lodge, constituted the duty and obligation which rested on the man. These activities required health, strength, and skill. The warrior was usually absent from his fireside on the chase, on the warpath, or on the fishing trip, weeks, months, and even years, during which he traveled hundreds of miles and was subjected to the hardships and perils of hunting and fighting, and to the inclemency of the weather, often without adequate shelter or food.

The labor required in the home and in all that directly affected it fell naturally to the lot of the woman. In addition to the activities which they shared in common with men, and the care of children, women attended to the tanning of skins, the weaving of suitable fibers into fabrics and other articles of necessity, the making of mats and mattresses, baskets, pots of clay, and utensils of bark; sewing, dyeing; gathering and storing of edible roots, seeds, berries, and plants, and the drying and smoking of meats brought home by the hunters.

On the march, the care of the camp equipage and of the various family belongings constituted part of the woman’s duties, in which she was assisted by the children and by any men were unable to participate in active fighting or hunting.

The essential principle governing this division of labor and responsibility between the sexes lies much deeper than the apparently heartless tyranny of the man. It is the best possible adjustment of the available means of the family to secure the largest measure of welfare and to protect and perpetuate the little community. No other division was so well adapted to the conditions of life among the North American Indians.

Fortified by the doctrine of signatures and by other superstitious reasons and beliefs, custom emphasized by various rites and observances the division of labor between the sexes. 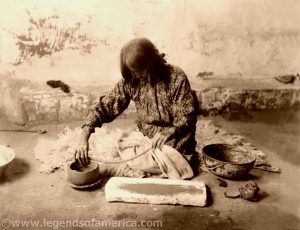 Thus, the sowing of seeds by women was supposed to render such seeds more fertile and the earth more productive than if planted by men, for it was held that woman has and controls the faculty of reproduction and increase. Hence, sowing and cultivating the crops became one of the exclusive departments of woman’s work.

According to Lewis and Clark, the Shoshone husband was the absolute proprietor of his wives and daughters and might dispose of them by barter or otherwise at his pleasure. According to Daniel Williams Harmon, a fur trader and explorer, his journal of 1820, described the women of the tribes visited by him as having been treated no better than the dogs. W. L. Hardesty, of the Hudsons Bay Company, said of the Kutchin and Loucheux Indians, that “the women are literally beasts of burden to their lords and masters. All the heavy work is performed by them.” A similar statement is made by Stephen Powers, an American journalist, and ethnographer, in 1877 in regard to the Karok of California.

Henry Rowe Schoolcraft, described in his 1855 book, Indian Tribes, that the Cree women were subjected to lives of heavy and exacting toil, and that some mothers would not hesitate to kill their female infants to save them from the miseries which they themselves had suffered.

Samuel de Champlain, an explorer, geographer, and colonizer, wrote in 1615, that the Huron and Algonquian women were expected to attend their husbands from place to place in the fields, acting as a pack-mule in carrying the baggage and in doing a number of other things. Yet, it would seem that this hard life did not thwart their development, for he adds that among these tribes, there were a number of powerful women of extraordinary height, who had almost sole care of the lodge and the work at home, tilling the land, planting the corn, gathering a supply of fuel for winter use, beating and spinning the hemp and the bark fibers, the product of which was utilized in the manufacture fishing nets and other purposes; the women also harvested and stored the corn and prepared it for eating.

The duties of a woman of the Ottawa and Chippewa tribes were to bring into the lodge, of which she was the mistress, the meat which the husband left at the door; to dry, care and cook it; to get the fish at the landing or harbor and to prepare it for immediate use or for storage; to fetch water; to spin various fibers in order to secure thread for various uses; to cut firewood in the surrounding forest; to clear land for planting and to raise and harvest the several kinds of grain and vegetables; to manufacture moccasins for the entire family; to make the sacks to hold grain, and the long or round mats used for covering the lodge or for mattresses; to tan the skins of the animals the men had killed, and to make robes of those which were used as furs.

She also made bark dishes while her husband or other male members of the household made those of wood; she designed many curious pieces of artwork; when her infant, swathed on a cradle-board, she cried, she lulled it to sleep with song. When on the move, the woman carried the coverings of the lodge, if not conveyed by a canoe. In all her duties she was aided by her children and by dependents or guests, not rarely by the old men and the crippled who were still able to be of service.

While the tribes of the northwest coast are distinct in language and in physical features and mental characteristics, they are nevertheless one in culture; their arts, industries, customs, and beliefs differ in so great a degree from those of all other Indian tribes that they constitute a well defined cultural group. The staple food of these Indians was supplied by the sea, from which the women gather sea-grass, which was cut and pressed into square cakes and dried for winter use. Clams and mussels were eaten fresh, or strung on sticks or strands of bark and dried for winter consumption. Considerable quantities of berries and roots were also consumed. The dense forests along the coast furnished wood for building cabins, canoes, implements, and utensils. The Red Cedar was the most useful as it yielded the materials for a large part of their goods, its wood being utilized for building and carving, and its bark for the manufacture of clothing and ropes, in which the women performed the greater part of the work. The women had their share also in the preparation and curing of the flesh and furs of the various game and fur-bearing animals which their husbands and brothers killed. Berries and crab-apples were preserved by them for winter use; the food was stored in spacious boxes made from cedar wood suitably bent, having bottoms sewed to their sides. Women assisted in curing and tanning the skins designed for clothing. Dog’s hair, mountain-goat’s wool, and feathers were woven into fabrics suitable for wear or barter; soft cedar bark was also prepared for use as garments. The women made, in great quantity, a variety baskets of rushes and cedar bark for storage and carrying purposes; mats of cedar bark, and in the South, of rushes, are made for bedding, packing, seats, dishes, and covers for boxes.