By Paul R. Petersen, author of Quantrill of Missouri

Loved and respected by his men, hated and feared by his enemies, adored by the young Southern women who he met, and befriended by those who sought justice and protection. This is William Clarke Quantrill.

William Clarke Quantrill was a product of his times. He was a man made up by the personalities, the passions and the politics that surrounded him. Without the issue of slavery that ignited the nation and the turbulent individuals like John Brown and James Henry Lane that inflamed the border of Kansas and Missouri, history would never have recorded his name. To study the history of the border warfare between Kansas and Missouri is to also study the character of the people living there at the time. A slight provocation, however meaningless, was taken as a personal insult and could wind up in a feud or a personal duel or a lifetime of personal hatred between offending parties. There was a conflict along the border long before there was hatred and bloodshed. It was here that men, controlled by personal pride and patriotism lived, and in whose homes, hospitality and generosity were a way of life. Conflict arose between those already established in the region and those Northern emigrants from the large cities of the North who came west in hopes of an easy life and quick fortune. Most of the settlers along the border at this time were opportunists. Life was hard and a chance to earn money in order to stay alive didn’t come along every day. Many sought opportunities in honest endeavors while others sought a dollar in any way that offered a lucrative deal. Some sought their fortune in the new political future along the border and some sought their fortune in the law. But for everyone who sought an honest living, there were ten others looking to make a quick dollar by jumping someone else’s land claim or by larceny or deceit. These incompatible sectional differences only made the growing conflict between Missourians and Kansans more unenduring.

Most stories about Quantrill are merely lies. How could a single human being be written about in history as the devil incarnate, without love for either of his parents or family and whose own mother was declared to be a mother in name only, showing no love for her son? Author William Elsey Connelley said that Quantrill’s father was an embezzler and thief and was looked down upon by his neighbors. Quantrill was described as being fiendish for skinning neighbor’s cats and shooting pigs through their ears just to listen to them squeal. Connelley reported that when Quantrill courted young women his talk would turn sadistic as he commented how many men he could hang from certain tree limbs. In his life in Kansas before the Civil War, he was described as being shiftless and without a visible means of support, even stealing from his neighbors and local merchants. He was called a bloodthirsty killer, murdering and stealing from those in Missouri as well as Kansas.

Connelley said that no one in Quantrill’s band trusted him and he made them nervous and edgy. It was said he had a mistress and after the war, she opened a house of prostitution in St. Louis. When the war was coming to a close, Quantrill was even said to have made plans to go to Washington D.C. to kill President Lincoln. Historical evidence has never supported these accounts. Many scholars, who knew of Connelley’s intent and had read portions of his manuscript before publication, warned him against his “extreme statements,” but they were simply ignored. The contradictions that are discovered were based on hearsay, lies, half-truths, and outright distortions.

How could this so-called fiend have been a respected schoolteacher? How could he have organized and led up to 400 men in the most noted band of guerrilla fighters known in history? Why did regular Confederate army officers who outranked him yield to him and place themselves subordinate to his command? How could he be so hated by his own men and still lead them in the van of the most renowned battles throughout Missouri, winning victories over superior Union forces?

Mothers entrusted their sons to him. Citizens served him as spies. Women willingly nursed him and his men while his followers were intensely loyal to him even guarding him in battle. Most of his followers were God-fearing farmers trying to live a Christian lifestyle. Critics may point out that mere association with upright righteous people wouldn’t necessarily make Quantrill the same. But from experience, God-fearing, righteous people would not have followed a depraved, degenerate, psychotic killer.

One of Quantrill’s men stated after the war “You who were not there can not realize for a moment the dreadful passions that were roused in the hearts of men during those fearful years.” The Missouri border during the Civil War was the scene of the greatest savagery in American history. Never before or since have, Americans exhibited such brutality on their fellow Americans. The controversy surrounding William Clarke Quantrill is nothing less than a scandal. At the time the Northern press conspired to blacken his name and those of his followers, a conspiracy that continues even today. 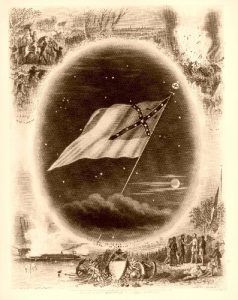 Captain William Gregg, Quantrill’s adjutant, reported in a letter after the war that, “Quantrill and his men have been unjustly slandered by the people of the North, a people who, even to this day, know nothing of them, except what they have read in irresponsible books and newspapers.” Gregg goes on to say that, “It is not enough that their valor is recognized, it is not enough that their honesty be confessed. We ask of our Northern brother, we ask of all mankind and all womankind a recognition of their patriotism, their love of country, and of liberty…we cannot remain silent, so long as any aspersion is cast by the pen of the historian, or the tongue of the orator upon their patriotic motives, or the loftiness of their purposes throughout that mighty struggle. We make no half-hearted apologies for their acts. It is justice for which we plead, not charity.”

Colonel R. H. Hunt, who served in the Union army fighting against Captain Gregg, said of him after the war, “That in so far as his memory serves him his statements can be depended upon absolutely. He is a man who would not willfully misrepresent.”

Quantrill did not act alone, and his followers have suffered a similar mischaracterization. According to the Northern press, every guerrilla was a bloodthirsty, brutal, psychotic killer. Their relatives were low-class individuals and criminally natured and their women were said to have loose morals. Historians refuse to acknowledge that Quantrill and his men were soldiers; instead, they refer to them as outlaws. From this perspective, Quantrill’s partisan ranger band could not be credited with winning a military victory in open battle, so they became bloodthirsty killers who murdered and massacred their victims. These were the accounts carried down through history, written by a victorious enemy over a beaten but unbowed foe. John McCorkle, one of Quantrill’s men, wrote a book about his experiences with Quantrill, explaining that it was “not published in any spirit of malice or hatred, but in order that the truth may be known, that the world may know that Quantrill and his band were justified in nearly all of their acts and that they were not altogether bad; that they were driven to desperation by brutal outrages committed against them and their friends…”. Likewise, Captain Gregg wrote that “History after history has been written of Quantrill and his men, none of which can be characterized as true. And that which is not true, is not history.”

1 thought on “William Quantrill – The Man, the Myth, the Soldier”