Mathew Kinkead was a merchant, trader, and rancher in New Mexico and Colorado before following the California Goldrush, where he finally found wealth.

Mathew Kinkead was born in Madison County, Kentucky, in about 1790 to David Kinkead and Jane Guinn Kinkead, the first of seven children. The family moved to the Femme Osage River in Missouri in 1803, and in 1806, they moved again to the forks of the Charette River, about 15 miles above St. Charles, Missouri. In 1808 they finally settled at Old Franklin, near Boonslick, Missouri.

When the War of 1812 broke out, David Kinkead and his neighbors built the stockaded Fort Kincaid on the north side of the Missouri River. Here, area residents, including Josia Gregg, William Wolfskill, Kit Carson, James Cockerell, Stephen Cooper (who opened the trade with Santa Fe in 1821), and many others who later became Santa Fe traders, took refuge and fought several skirmishes with the Indians.

At the age of 16 years old, Kit Carson secretly signed on with a large merchant caravan heading to Santa Fe; his job was to tend the horses, mules, and oxen. After his arrival, he looked up Mathew Kinkead in Taos, who had been a friend to Carson’s father in Missouri. Carson wintered with Kinkead, learning the skills of a trapper, and through others, began to learn Spanish and several Native American languages. Although Kinkead had opened his home to the young Kit Carson, Kit never seemed to like or speak well of the older man.

By December 1830, Kinkead had become a citizen of Mexico and was still operating the whiskey mill. In 1830, he was joined by a 30-year-old Missouri carpenter named Edmond Conn. He helped Conn gain citizenship, and when Conn was baptized as a Roman Catholic in 1834, he took the name “Francisco.”

In 1834 Kinkead and Conn applied for a grant of land near present-day Mora in northeastern New Mexico. Before receiving the grant in 1835, they moved there with several hundred other settlers from the Taos Valley. They called their town Santa Gertrudis de Mora, or simply Mora.

Kinkead’s next-door neighbor was a man named Jose Manuel Sauso, who was married to a beautiful woman named Teresita Sandoval Sauso. The couple had married when Teresita was 17 years old and the pair had four children. She was 23 at the time Kinkead met her. 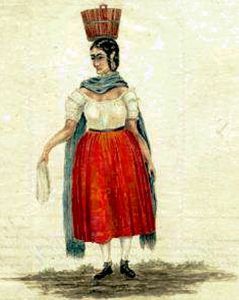 The following year, she gave birth to a fifth child in Taos, New Mexico, on November 29, 1835. However, the boy, Juan Andrés, was Mathew Kindead’s son. She soon became his common-law wife, and a year later, she bore him a daughter named Rafaela. Though Teresita was said to be strikingly beautiful, she was also strong-willed, hot-tempered, jealous, and fickle with men.

Jose Manuel Suaso sold his land to Francisco Conn in 1838 and left the area. The same year, Kinkead sold his house and land in Mora for 300 sheep and a yoke of oxen. He kept his undivided interest in the common pasture further down the Mora River, where he continued to graze his sheep and probably made his home.

In the spring of 1841, Kinkead decided to move north to Colorado and hired “Uncle Dick” Richens Wootton to take his sheep from the Mora Valley to Kansas City and trade them for milk cows. He, along with Teresita and the children, then moved to a spot on the American side of the Arkansas River, about six miles above the mouth of the Fountain River at present-day Pueblo, Colorado. He planned to operate a buffalo farm there, probably partnering with Francisco Conn. They built a large adobe barn and corrals and waited for Dick Wootton to return from the east.

At that time, buffalo were a novelty in the east, and there was an excellent market for the animals. Kinkead and Teresita followed buffalo herds on the plains and captured newborn calves. When Wooton returned to Colorado with the milk cows, the buffalo calves would suckle on cows. When they were about a year old they were sent to the frontier settlements of Missouri, where they sold for $100 apiece. The buffalo farm lasted until the fall of 1843. 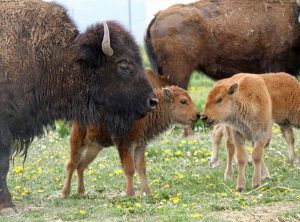 After selling 44 yearling buffalo calves, Kinkead took his profits and bought into the El Pueblo Trading Post, which was established by George Simpson and Robert Fisher in 1842. The same year the trading post was established, George Simpson married Teresita’s 14-year-old daughter, Juana Maria Suaso. At the fort were several other traders, including Joseph Mantz, his former partner, Edmond “Francisco” Conn, Joseph Doyle, and Alexander Barclay.

Though Kinkead had invested in El Pueblo, he didn’t stay there long, as, in 1843, he took his son, Juan Andrés, by that time anglicized to Andrew, and established a cattle ranch at Hardscrabble Canyon about 30 miles west of Pueblo. In the meantime, his common-law wife, Teresita, married British Trader Alexander Barclay.

The settlement of Hardscrabble prospered for several years, but the settlers began to leave because of the hostile Indians, the decline in the fur trade, and poor crops.

In the summer of 1847, Matthew Kinkead abandoned his cattle ranch along with his son, Andrew. In 1849, they went with John Brown, Jim Waters, and other settlers of Hardscrabble and Pueblo, to Sacramento, California. There, he was said to have become quite wealthy, owning ships, land, and haciendas.

The date of his death is unknown, but in 1878, his son Andrew returned to New Mexico to sell his father’s Mora Grant land, some lots in Taos, and property in Salt Lake City, Utah. While on this trip, Andrew was said to have visited his mother, Teresita, who was, at that time, living on her son-in-law’s Joseph Doyle’s ranch in Colorado.