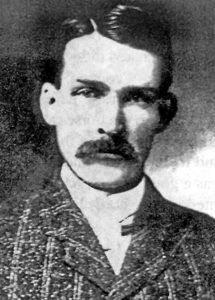 Warren Earp, the younger brother of Wyatt, Virgil, and Morgan Earp, was a lawman and gunfighter like the rest of his brothers.

Warren was born in Pella, Iowa on March 9, 1855. Warren joined his brothers in Tombstone, Arizona in 1881 and worked for Virgil as a deputy. However, he was not involved in the Gunfight at the O.K. Corral, some saying he wasn’t even in Tombstone at the time. Afterward, however; he participated in the revenge taken by the Earps against those that had killed Morgan and tried to kill Virgil.

He was with his brother Wyatt and Doc Holliday when Frank Stillwell was killed in Tucson on March 20, 1882. Though he and the others were indicted for the murder, they were not convicted. After the whole Tombstone episode was finally over, Warren left Arizona but returned in 1891 where he worked as a mail stage driver on the road between Willcox and Fort Grant. On July 6, 1900, he argued with a man named Johnnie Boyett in Brown’s Saloon in Willcox. The two had a history of not liking each other due to their mutual affection for the same woman. As the argument progressed, Boyett shot and killed Warren.

The Tombstone Epitaph reported on July 9, 1900:

“Warren Earp, the youngest of the four Earp brothers whose names twenty years ago were synonymous with gunfighting on the Arizona frontier, died with his boots on here. He was shot through the heart in a saloon by Cowboy Johnny Boyett, and died almost instantly.”

Boyett was arrested for the shooting. The coroner’s inquest confirmed that he killed Earp. Boyett sought protection from the local sheriff, fearing retribution from the Earp brothers. He left the area to work on a ranch, staying out of Willcox for a long period of time, but no revenge was ever sought by the Earps.

Warren Earp was buried in Willcox, at the Pioneer Cemetery. Boyett was never charged with a crime.