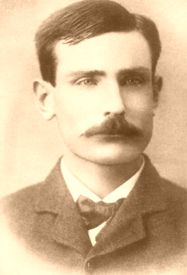 James “Jim” Masterson was born on September 16, 1855, in Quebec and moved with his family to Wichita, Kansas in 1871. After hunting buffalo with his brothers, he opened a saloon in Dodge City, Kansas. A year later, his brother Ed, who was serving as the Dodge City Marshal, was killed in the line of duty. Jim became the Assistant Marshal in Dodge City, Kansas in June, 1878. Working for Marshal Charlie Bassett, Masterson also worked with Wyatt Earp, who was serving as a Deputy Marshal.

In November, 1879, he was promoted to Marshal when Bassett had exceeded the number of terms that he could serve. When a new mayor was elected in Dodge, Jim lost his job. Ten days later, he shot a man named Al Updegraff in a gunfight and was ordered out of Dodge City. He then moved to Trinidad, Colorado where he served as a deputy and constable. By 1885, he had moved again, to Raton, New Mexico where was appointed under sheriff of Colfax County. Moving once again, he finally settled in Guthrie, Oklahoma, where he became the Logan County sheriff. In 1893, he became a U.S. Deputy Marshal and was involved in the Ingalls, Oklahoma shootout with the Doolin Gang. Masterson died of consumption on March 31, 1895.