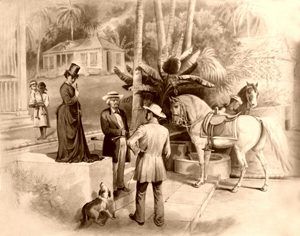 The South is perhaps the most distinctive and colorful American region. The Civil War (1861-65) devastated the South socially and economically. Nevertheless, it retained its unmistakable identity.

Like New England, the South was first settled by English Protestants. But whereas New Englanders tended to stress their differences from the old country, Southerners tended to emulate the English. Even so, Southerners were prominent among the leaders of the American Revolution, and four of America’s first five presidents were Virginians. After 1800, however, the interests of the manufacturing North and the agrarian South began to diverge.

Especially in coastal areas, southern settlers grew wealthy by raising and selling cotton and tobacco. The most economical way to raise these crops was on large farms called plantations, which required the work of many laborers. To supply this need, plantation owners relied on slaves brought from Africa, and slavery spread throughout the South.

Slavery was the most contentious issue dividing the North and South. To northerners, it was immoral; to southerners, it was integral to their way of life. In 1860, 11 southern states left the Union, intending to form a separate nation, the Confederate States of America. This rupture led to the Civil War, the Confederacy’s defeat, and the end of slavery. The scars left by the war took decades to heal. The abolition of slavery failed to provide African Americans with political or economic equality: Southern towns and cities legalized and refined the practice of racial segregation. 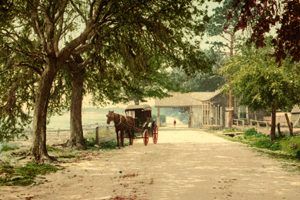 It took a long, concerted effort by African Americans and their supporters to end segregation. In the meantime, however, the South could point with pride to a 20th-century regional outpouring of literature by, among others, William Faulkner, Thomas Wolfe, Robert Penn Warren, Katherine Anne Porter, Tennessee Williams, Eudora Welty, and Flannery O’Connor.

As southerners, black and white, shook off the effects of slavery and racial division, a new regional pride expressed itself under the banner of “the New South” and in such events as the annual Spoleto Music Festival in Charleston, South Carolina and the 1996 summer Olympic Games in Atlanta, Georgia. Today the South has evolved into a manufacturing region, and high-rise buildings crowd the skylines of such cities as Atlanta and Little Rock, Arkansas. Due to its mild weather, the South has become a mecca for retirees from other U.S. regions and Canada.

Including Alabama, Arkansas, Florida, Georgia,  Kentucky, Louisiana,  Mississippi, North Carolina, South Carolina, Tennessee, Virginia, and West Virginia, the Southeast is a region of subtropical forests and, near the gulf coast, wetlands, especially in Florida. This region is home to Shenandoah National Park in Virginia, Smoky Mountain National Park in North Carolina and Tennessee, the Everglades in Florida, and more. Virginia was the birthplace of eight presidents. Atlanta’s Hartsfield Aiport is the busiest in the world. These states all struggled after the Civil War. The climate in the Southern region is humid subtropical with hot summers. Hurricanes can reach landfall in the summer and fall months along the Atlantic and Gulf coasts. Major geographical features include the Appalachian Mountains, the Atlantic Ocean, the Gulf of Mexico, and the Mississippi River. 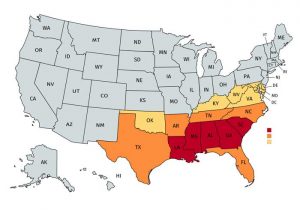 Geography Summary of the United States