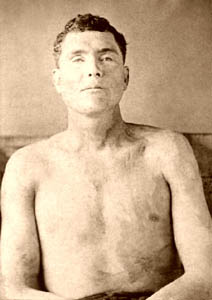 Chadwell was born in Missouri but raised in Minnesota. At some point, Chadwell returned to Missouri and was thought to have ridden with William Quantrill in the Civil War. Sometime later, he hooked up with the James-Younger Gang and participated in the Missouri Pacific Railroad train in Otterville, Missouri, on July 7, 1876, where gang members made off with some $15,000.

Some believe he persuaded a reluctant Jesse James to rob a bank in Minnesota. On September 7, 1876, Chadwell and seven other gang members attempted to rob the First National Bank of Northfield, Minnesota, but when local citizens fought back, Bill Chadwell, Clell Miller, and Charlie Pitts were killed. The rest escaped, but the Younger Brothers would be captured and sent to prison. After his death, his remains were taken by a young medical student named Henry M. Wheeler, who had been involved in the shoot-out. His skeleton would later be displayed in Wheeler’s office when he went into practice.

The James-Younger Gang – Terror in the Heartland