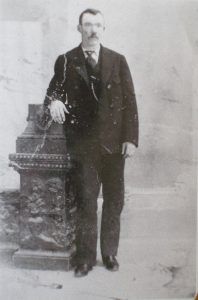 George Curry, aka: Flat Nose, Big Nose was a Canadian-American robber who rode with the Wild Bunch in the Old West.

Born on Prince Edward Island, Canada in about 1864, Curry moved to Nebraska with his family when he was still a child. At the age of 15, he drifted west and soon became involved in cattle rustling. Somewhere along the line, a horse kicked him in the nose, earning him not only a disfigurement but also his nicknames. He soon joined the Wild Bunch with whom he participated in several holdups. While working with Butch Cassidy’s gang, Harvey Logan adopted his surname and became known as Kid Curry.

In June 1897, George Curry, along with Harvey Logan and Tom O’Day held up the Butte County Bank at Belle Fourche, South Dakota. O’Day was arrested immediately as his horse had run away, but the other two escaped. However, while Curry and Logan were holed up in Fergus County, Montana, a posse caught up with them and hauled them back to South Dakota where they were placed in the Deadwood jail. The outlaws, however, had other ideas and in November they overpowered the jailer and escaped.

After participating in more robberies of post offices and trains, Curry was rustling cattle in Moab County, Utah when lawmen Jessie M. Tyler and Thomas Preece finally caught up with him on April 17, 1900, and Curry was shot and killed. His friend, Harvey Logan, was so enraged that he soon traveled to Utah where he killed both Tyler and his Deputy, Sam Jenkins, in a gunfight. Curry is buried in Chadron, Nebraska.

Harvey Logan, aka “Kid Curry” – The Wildest of the Wild Bunch