Confederate General Robert E. Lee was concerned about Major General David Hunter’s advances in the Shenandoah Valley, which threatened critical railroad lines and provisions for the Virginia-based Confederate forces. He sent Lieutenant General Jubal Early’s corps to sweep the Union forces from the Valley and, if possible, to menace Washington, D.C., hoping to compel Lieutenant General Ulysses S. Grant to dilute his forces against Lee around Petersburg, Virginia.

Cool Spring (July 17-18, 1864) – Also known as the Battle of Island Ford, Parkers Ford, Snickers Ferry, and Castleman’s Ferry, this two-day engagement took place in Clarke County. A Union column, consisting of the VI Corps and elements of the XIX Corps under Major General Horatio Wright, pursued Lieutenant General Jubal Early’s army as it withdrew from the environs of Washington, D.C. Wright’s force was joined by elements of Brigadier General George Crook’s command, which had accompanied Hunter during his retreat through West Virginia. On July 17th, the Union cavalry passed through Snickers Gap and attempted to force the Shenandoah River passage at Snickers Ford (Castleman’s Ferry). On the morning of July 18th, the vanguard of the Union infantry moved through Snickers Gap. Colonel Joseph Thoburn (of Crook’s command) led his division downstream to cross the river at Judge Richard Parker’s Ford. Confederate General Early’s three nearby infantry divisions moved to defend the fords. Major General Robert Rodes’s division attacked and shattered Colonel Thoburn’s right flank on the Cool Spring plantation in the afternoon. Thoburn made a stand behind a stone wall at the river’s edge and beat off three attacks until darkness enabled him to withdraw. Union pursuit of Early was delayed several days. The Confederate victory resulted in estimated casualties of 422 Union and 397 Confederate.

Kernstown II (July 24, 1864) – This engagement also took place in Frederick County and Winchester, Virginia. Believing that Confederate General Jubal Early’s army was no longer a threat in the Valley, Major General Horatio Wright abandoned his pursuit and ordered the VI and XIX Corps to return to Washington, where they were to be sent to Lieutenant General Ulysses S. Grant “army group” before Petersburg. Wright left Brigadier General George Crook with three divisions and some cavalry to hold Winchester. Under orders to prevent reinforcements from being sent to Grant, Confederate General Jubal Early marched north on July 24th against General Crook. After an hour of stubborn resistance at Pritchard’s Hill, the Federal line collapsed, and Crook’s divisions streamed back in disarray through the streets of Winchester. Colonel James Mulligan commanding Crook’s 3rd Division was mortally wounded. Rutherford B. Hayes commanded a brigade against Confederate General John C. Breckinridge’s wing. Crook retreated to the Potomac River and crossed near Williamsport on July 26th. As a result of this defeat and the burning of Chambersburg, Pennsylvania, on July 30th, Grant returned the VI and XIX Corps and appointed General Philip Sheridan as commander of Union forces in the Valley. The Confederate victory resulted in estimated casualties of 1,200 Union and 600 Confederate.

This campaign was a series of battles around Petersburg, Virginia, fought from June 9, 1864, to March 25, 1865. Although it is more popularly known as the Siege of Petersburg, it was not a classic military siege, in which a city is surrounded, and all supply lines are cut off, nor was it strictly limited to actions against Petersburg. The campaign was nine months of trench warfare in which Union forces commanded by Lieutenant General Ulysses S. Grant assaulted Petersburg unsuccessfully and then constructed trench lines that eventually extended over 30 miles from the eastern outskirts of Richmond, Virginia, to around the eastern and southern outskirts of Petersburg. 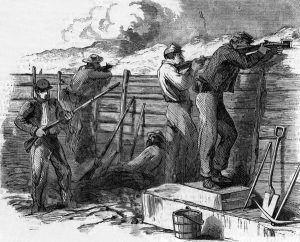 Sharpshooters in the Petersburg Campaign

Petersburg I (June 9, 1864) – Also called the Battle of Old Men and Young Boy, this engagement took place in the City of Petersburg, Virginia. On June 9th, Union Major General Benjamin Butler dispatched about 4,500 cavalry and infantrymen against the 2,500 Confederate defenders of Petersburg. While Butler’s infantry demonstrated against the outer line of entrenchments east of Petersburg, Brigadier General August Kautz’s cavalry division attempted to enter the city from the south via the Jerusalem Plank Road but was repulsed by Home Guards. Afterward, Butler withdrew. This was called the “battle of old men and young boys” by local residents. On June 14-17, the Army of the Potomac crossed the James River and began moving towards Petersburg to support and renew Butler’s assaults. The Confederate victory resulted in total estimated casualties of 120 men.

Petersburg II (June 15-18, 1864) – This large three-day engagement is also known as the Assault on Petersburg. Marching from Cold Harbor, Major General George Meade’s Army of the Potomac crossed the James River on transports and a 2,200-foot long pontoon bridge at Windmill Point. Union Major General Benjamin Butler’s leading elements, including the XVIII Corps and Brigadier General August Kautz’s cavalry, crossed the Appomattox River at Broadway Landing and attacked the Petersburg defenses on June 15th. The 5,400 defenders of Petersburg under the command of Confederate General P.G.T. Beauregard were driven from their first line of entrenchments back to Harrison Creek. After dark, the XVIII Corps was relieved by the II Corps. On June 16th, the II Corps captured another section of the Confederate line, and on the 17th, the IX Corps gained more ground. General Beauregard stripped the Howlett Line (Bermuda Hundred) to defend the city, and General Robert E. Lee rushed reinforcements to Petersburg from the Army of Northern Virginia. The II, XI, and V Corps from right to left attacked on June 18th but were repulsed with heavy casualties. By now, the Confederate works were heavily manned, and the greatest opportunity to capture Petersburg without a siege was lost. Union General James St. Clair Morton, the IX Corps chief engineer, was killed on June 17th. The Confederate victory resulted in an estimated 8,150 Union casualties and 3,236 Confederate.

Jerusalem Plank Road (June 21-24, 1864) – Also called the First Battle of Weldon Railroad, this four-day engagement took place in Dinwiddie County and Petersburg. On June 21st, the Union II Corps, supported by the VI Corps, attempted to cut the Weldon Railroad, one of the major supply lines into Petersburg. The movement was preceded by Major General Cadmus Wilcox’s cavalry division, which began destroying tracks. On June 22nd, troops from Lieutenant General Gen. A.P. Hill’s corps led by Brigadier General William Mahone counterattacked, forcing the II Corps away from the railroad to positions on the Jerusalem Plank Road. Although the Federals were driven from their advanced positions, they could extend their siege lines farther to the west. Total estimated casualties were 4,000.

Staunton River Bridge (June 25, 1864) – Also called the Battle of Blacks and Whites or Old Men and Young Boys, this engagement occurred in Halifax County and Charlotte, Virginia. On June 22nd, Brigadier Generals James Wilson and August Kautz’s cavalry divisions were dispatched from the Petersburg lines to disrupt Confederate rail communications. Riding via Dinwiddie Court House, the raiders cut the South Side Railroad near Ford’s Station that evening, destroying tracks, railroad buildings, and two supply trains. On June 23rd, General Wilson proceeded to the Richmond & Danville Railroad at Burke Station, where he encountered Confederate General William H.F. Lee’s cavalry between Nottoway Court House and Blacks and Whites (modern-day Blackstone). Wilson followed Kautz along the South Side Railroad, destroying about 30 miles of track as he advanced. On June 24th, while Kautz remained to skirmish around Burkeville, Wilson crossed over to Meherrin Station on the Richmond & Danville and began destroying the track. On June 25th, Wilson and Kautz continued tearing up track south to the Staunton River Bridge, where they were delayed by Home Guards, who prevented the bridge’s destruction. Lee’s cavalry division closed on the Federals from the northeast, forcing them to abandon their attempts to capture and destroy the bridge. By this time, the raiders were nearly 100 miles from Union lines. The Confederate victory resulted in estimated total casualties of 150.