The Chancellorsville Campaign of the Civil War took place in Virginia in April and May 1863. Culminating in the Battle of Chancellorsville, it produced one of the most stunning and ambivalent Confederate victories of the Civil War. Confederate General Robert E. Lee had trounced the Army of the Potomac at Fredericksburg the previous December. Joseph Hooker had thoroughly reorganized and revitalized his dispirited Union troops by then. Declaring that he had created “the finest Army on the Planet,” he set into motion an elaborate plan designed to quietly turn the left flank of the outnumbered and underfed Confederate Army of Northern Virginia, which was camped not far from Fredericksburg. The campaign resulted in an estimated 17,304 Union and 13,460 Confederate. 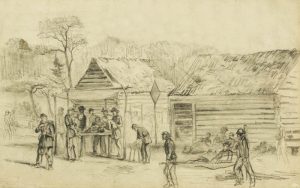 The field hospital at Chancellorsville, Virginia by Edwin Forbes.

Chancellorsville (April 30-May 6, 1863) – Taking place in Spotsylvania County over a week, this significant battle engaged more than 150,000 combined troops. On April 27, Union Major General Joseph Hooker led the V, XI, and XII Corps to turn the Confederate left flank by crossing the Rappahannock and Rapidan Rivers above Fredericksburg. Passing the Rapidan River via Germanna and Ely’s Fords, the Federals concentrated near Chancellorsville on April 30 and May 1. The III Corps was ordered to join the army via United States Ford. Major General Sedgwick’s VI Corps and Major General John Gibbon’s division remained to demonstrate against Fredericksburg’s Confederates. In the meantime, Confederate General Robert E. Lee left a covering force under Major General Jubal A. Early in Fredericksburg, and marched with the rest of the army to confront the Federals. As Union Major General Joseph Hooker’s army moved toward Fredericksburg on the Orange Turnpike, they encountered increasing Confederate resistance.

Hearing reports of an overwhelming Confederate force, Hooker ordered his army to suspend the advance and concentrate again at Chancellorsville. Pressed closely by Lee’s advance, Hooker adopted a defensive posture, thus giving Lee the initiative. On the morning of May 2, Lieutenant General Thomas J. Jackson directed his corps on a march against the Federal left flank, which was reported to be “hanging in the air.” 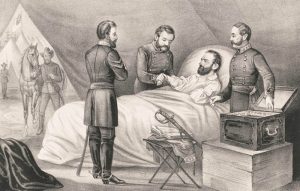 As Jackson’s column reached its jump-off point, fighting was sporadic on other portions of the field throughout the day. At 5:20 pm, Jackson’s line surged forward in an overwhelming attack that crushed the Union XI Corps. Federal troops rallied, resisted the advance, and counterattacked. Disorganization on both sides and darkness ended the fighting. While making a night reconnaissance, Jackson was mortally wounded by his men and carried from the field. Confederate Brigadier General J.E.B Stuart took temporary command of Jackson’s Corps. On May 3, the Confederates attacked the army’s wings and massed their artillery at Hazel Grove. This finally broke the Federal line at Chancellorsville. General Hooker withdrew a mile and entrenched in a defensive “U” with his back to the river at United States Ford. Union Major Generals Hiram Berry and Amiel Whipple and Confederate Major General Elisha Paxton were killed, and General Stonewall Jackson was mortally wounded. On the night of May 5-6, after Union reverses at Salem Church, General Hooker re-crossed to the Rappahannock River’s north bank. Many historians considered this battle General Robert E. Lee’s greatest victory. The battle resulted in an estimated 14,000 Union casualties and 10,000 Confederate casualties. 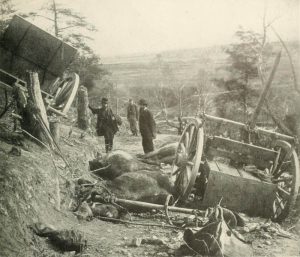 Second Battle of Fredericksburg (May 3, 1863) – Also called the Second Battle of Marye’s Heights, this engagement took place in Fredericksburg, Virginia. On May 1, General Robert E. Lee left Major General Jubal A. Early’s division to hold Fredericksburg while marching with the rest of the army to meet Major General Joseph Hooker’s main offensive thrust at Chancellorsville. On May 3, the Union VI Corps under Major General John Sedgwick, reinforced by General John Gibbon’s II Corps division, having crossed the Rappahannock River, assaulted and carried the Confederate entrenchments on Marye’s Heights. The outnumbered Confederates withdrew and regrouped west and southeast of town. The Union victory resulted in estimated casualties of 1,100 Union and 700 Confederate.

Salem Church (May 3-4, 1863) – Also called the Battle of Bank’s Ford, this engagement took place in Spotsylvania County. After occupying Marye’s Heights on May 3, Union Major General John Sedgwick’s VI Corps marched out on the Plank Road to reach General Joseph Hooker’s force at Chancellorsville. He was delayed by Confederate Brigadier General Cadmus M. Wilcox’s brigade at Salem Church. General Robert E. Lee detached two of his divisions from the Chancellorsville lines and marched them to Salem Church during the afternoon and night. Several Union assaults were repulsed the next morning with heavy casualties, and the Confederates counterattacked, gaining some ground. After dark, Union General Sedgwick withdrew across two pontoon bridges at Scott’s Dam under harassing artillery fire. Hearing that Sedgwick had been repulsed, General Hooker abandoned the campaign, re-crossing on the night of May 5-6 to the north bank of the Rappahannock River. The Confederate victory resulted in total estimated casualties of 5,000.