Civil War troops in the Shenandoah Valley of Virginia by Alfred Waud.

With Lieutenant General Ulysses S. Grant’s promotion to General-in-Chief of all Union armies in March 1864, he lost no time organizing a huge offensive across the entire front of the embattled states. During the Civil War, Lynchburg, Virginia was used as a hospital center and its railroad connection supplied the Confederate States Army. While General Grant was pressing Confederate General Robert E. Lee in the Overland Campaign, he sent Major General David Hunter to the Shenandoah Valley. Hunter with an army composed of two infantry divisions and two divisions of cavalry was ordered to disrupt railroad and transportation networks and destroy the economic and agricultural resources that supported them. The campaign took place between May 15 and June 18, 1864. 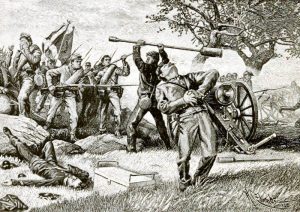 New Market (May 15, 1864) – This battle took place in Shenandoah County. In conjunction with his Spring offensive, Lieutenant General Ulysses S. Grant ordered Major General Franz Sigel to move up the Shenandoah Valley along the Valley Pike with 10,000 men to destroy the railroad and canal complex at Lynchburg. On May 15th, Sigel was attacked by a makeshift Confederate army of about 4,100 men commanded by Major General John C. Breckinridge. At a crucial point, a key Union battery was withdrawn from the line to replenish its ammunition, leaving a weakness that Breckinridge was quick to exploit. He ordered his entire force forward, and Sigel’s stubborn defense collapsed. Threatened by the Confederate cavalry on his left flank and rear, Sigel ordered a general withdrawal, burning the North Fork bridge behind him. Sigel retreated down the Valley to Strasburg and was soon replaced by Major General David Hunter. The Confederate victory resulted in an estimated 840 Union casualties and 540 Confederate.

Piedmont (June 5-6, 1864) – After replacing Major General Franz Sigel in command of Union forces in the Shenandoah Valley, Major General David “Black Dave” Hunter renewed the Union offensive in Augusta County. On June 5th, Hunter engaged the Confederate army under Brigadier General William “Grumble” Jones north of Piedmont. After severe fighting, a flanking movement made by Colonel Joseph Thoburn’s brigade turned Jones’s right flank. While trying to stem the retreat of his soldiers, Jones was killed. The retreat became a rout. More than 1,000 Confederates, including 60 officers, were captured, and  Jones lost three guns. General Hunter occupied Staunton on June 6th and, after a pause to await the arrival of Brigadier General George Crook’s column, began to advance on Lynchburg, destroying military stores and public property in his wake. The Union victory resulted in estimated casualties of 875 Union and 1,500 Confederate. 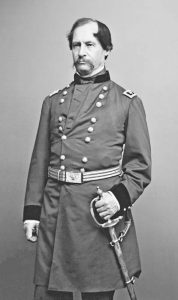 Lynchburg (June 17-18, 1864) – From Lexington, Major General David Hunter advanced against the Confederate rail and canal depots and the hospital complex at Lynchburg, Virginia. Reaching the outskirts of town on June 17th, his first tentative attacks were thwarted by the timely arrival by rail of Lieutenant General Jubal A. Early’s II Corps vanguard from Charlottesville. Hunter withdrew the next day after sporadic fighting because of a critical shortage of supplies. His line of retreat through West Virginia took his army out of the war for nearly a month and opened the Shenandoah Valley for a Confederate advance into Maryland. The Confederate victory resulted in an estimated 800 Union casualties and eight Confederate.