The Bermuda Hundred Campaign of the Civil War was a series of battles fought in the town of Bermuda Hundred, outside Richmond, Virginia in May 1864. On March 12, 1864, Lieutenant General Ulysses S. Grant succeeded Major General Henry W. Halleck as General in Chief of the United States Armies. As March drew to a close, Grant decided to visit the Hampton Roads headquarters of the Department of Virginia and North Carolina to arrange an offensive campaign on Richmond. Union Major General Benjamin Butler would command this expedition, with his Army of the James numbering more than 40,000 men. Threatening Richmond from the east the Union was stopped by forces under Confederate General P.G.T. Beauregard. 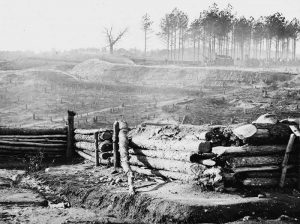 Swift Creek (May 9, 1864) – Also known as the Battle of Arrowfield Church, this engagement occurred in Chesterfield County. On May 9th, Major General Benjamin Butler made a thrust toward Petersburg and was met by Confederate General Bushrod Johnson’s Division at Swift Creek. A premature Confederate attack at Arrowfield Church was driven back with heavy losses; but, Union forces did not follow up. After skirmishing, General Butler seemed content to tear up the railroad tracks and did not press the defenders. In conjunction with the advance to Swift Creek, five Federal gunboats steamed up the Appomattox River to bombard Fort Clifton, while Colonel Edward Hincks’ U.S. Colored Troops infantry division struggled through the marshy ground from the land side. The gunboats were quickly driven off, and the infantry attack was abandoned. The inconclusive battle resulted in an estimated 990 total casualties.

Chester Station (May 10, 1864) – Also taking place in Chesterfield County, elements of Confederate Major General Robert Ransom’s division conducted a reconnaissance-in-force against a portion of Major General Benjamin Butler’s army that was destroying the railroad at Chester Station. The Confederates attacked near the Winfree House, and the Federals retired to their Bermuda Hundred lines. The inconclusive battle resulted in total estimated Union casualties of 280 and 249 Confederate. 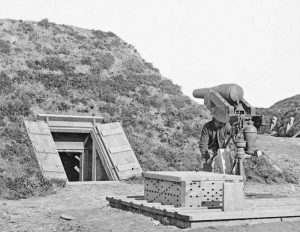 Proctor’s Creek (May 12-16, 1864) – This four-day engagement, also known as the Battle of Drewry’s Bluff or Fort Darling, took place in Chesterfield County. After his repulse at Swift Creek and Fort Clifton on May 9th, Major General Benjamin Butler withdrew into his entrenchments at Bermuda Hundred. A Confederate army of 18,000 was patched together under General P.G.T. Beauregard’s command to confront Butler’s 30,000 troops. On May 12th, Butler moved north against the Confederate line at Drewry’s Bluff; but again adopted a defensive posture when gunboats did not support his attack. On the 13th, a Union column struck the Confederate line’s right flank at the Wooldridge House, carrying a line of works. General Butler remained cautious, however, giving Beauregard time to concentrate his forces. At dawn on May 16th, Confederate Major General Ransom’s Confederate division opened an attack on Butler’s right flank, routing many units. Subsequent attacks lost direction in the fog, but the Federals were disorganized and demoralized. After severe fighting, Butler extricated himself from battle, withdrawing again to his Bermuda Hundred Line. This battle stopped Butler’s offensive against Richmond. The Confederate victory resulted in estimated total casualties of 6,660.