The Bristoe Campaign was a series of minor battles fought in Virginia during October and November 1863 during the Civil War. Major General George G. Meade, commanding the Union Army of the Potomac, began to maneuver in an unsuccessful attempt to defeat General Robert E. Lee’s Army of Northern Virginia. Lee and his officers were disgusted with their lack of success. They had not achieved their primary objectives of bringing on a decisive battle or preventing the Western Theater’s Federal reinforcement. 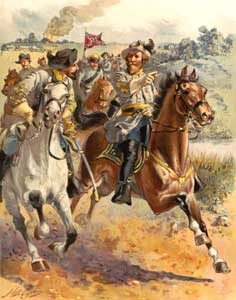 Auburn (October 13, 1863) – Also called the Battle of Catlett’s Station or the Battle of St. Stephen’s Church, this engagement occurred in Fauquier County. The Confederate army concentrated behind the Rapidan River in Orange County. The Federals advanced to the Rappahannock River in August, and in mid-September, they pushed strong columns forward to confront General Robert E. Lee along the Rapidan River. Early in September, Lee dispatched two divisions of Lieutenant General James Longstreet’s Corps to reinforce the Confederate army in Georgia; the Federals followed suit, sending the XI and XII Corps to Tennessee by railroad in late September after the Battle of Chickamauga (September 18-20). In early October, Lee began an offensive sweep around General Meade’s right flank with his remaining two corps, forcing the Federals to withdraw along the Orange & Alexandria Railroad line. On October 13, Confederate Major General J.E.B. Stuart, with General Fitzhugh Lee and Brigadier General Lunsford L. Lomax’s brigades, skirmished with the rearguard of the Union III Corps near Auburn. Finding himself cut off by retreating Federal columns, Stuart secreted his troopers in a wooded ravine until the unsuspecting Federals moved on. The inconclusive battle resulted in an estimated 50 total casualties.

Bristoe Station (October 14, 1863) – Taking place in Prince William County, this battle occurred when Confederate Lieutenant General A.P. Hill stumbled upon two corps of the retreating Union army at Bristoe Station and attacked without proper reconnaissance. Union soldiers of the II Corps, posted behind the Orange & Alexandria Railroad embankment, mauled Henry Heth’s division’s brigades and captured a battery of artillery. Hill reinforced his line but could make little headway against the determined defenders. After this victory, the Federals continued their withdrawal to Centreville unmolested. Lee’s Bristoe offensive sputtered to a premature halt. After minor skirmishing near Manassas and Centreville, the Confederates retired slowly to the Rappahannock River, destroying the Orange & Alexandria Railroad as they went. At Bristoe Station, Hill lost standing in the eyes of Lee, who angrily ordered him to bury his dead and say no more about it. The Union victory resulted in estimated Union casualties of 540 and 1,380 Confederate.

Buckland Mills (October 19, 1863) – Also called the Battle of Buckland Races or Chestnut Hill, this engagement occurred in Fauquier County. After the defeat at Bristoe Station and an aborted advance on Centreville, Major General J.E.B. Stuart’s cavalry shielded the withdrawal of General Robert E. Lee’s army from the vicinity of Manassas Junction. Under Major General J. Kilpatrick, the Union cavalry pursued Stuart’s cavalry along the Warrenton Turnpike but was lured into an ambush near Chestnut Hill and routed. The Federal troopers were scattered and chased five miles in an affair that came to be known as the “Buckland Races.” The Confederate victory resulted in estimated Union casualties of 1851 and 408 Confederate. 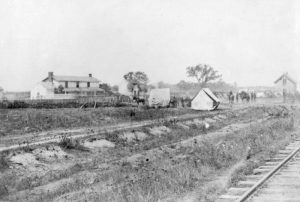 Rappahannock Station II (November 7, 1863) – Taking place in Fauquier and Culpeper Counties, this battle occurred when the Union army forced passage of the Rappahannock River at two places. A dusk attack overran the bridgehead at Rappahannock Station, with the Federal soldiers capturing more than 1,600 men of General Jubal Early’s Division. Fighting at Kelly’s Ford was less severe with about 430 casualties, but the Confederates retreated, allowing the Federals across in force. On the verge of going into winter quarters around Culpeper, General Robert E. Lee’s army retired instead into Orange County south of the Rapidan River. The Army of the Potomac occupied the vicinity of Brandy Station and Culpeper County. The Union victory resulted in an estimated 2,537 casualties, including 1,600 Confederate prisoners.