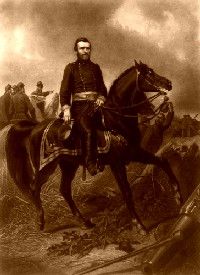 Also known as the Wilderness Campaign, this was a series of battles fought in Virginia during May and June 1864. Lieutenant General Ulysses S. Grant, General-in-Chief of all Union armies, directed the Army of the Potomac’s actions, commanded by Major General George G. Meade, and other forces against Confederate General Robert E. Lee’s Army of Northern Virginia. Although Grant suffered severe losses during the campaign, it was a strategic Union victory. It inflicted proportionately higher losses on Lee’s army and maneuvered it into a siege at Richmond and Petersburg, Virginia, in just over eight weeks.

Wilderness (May 5-7, 1864) – This offensive action by the Union Army, also called the Battles of Parker’s Store, Craig’s Meeting House, Todd’s Tavern, Brock Road, and the Furnaces, took place in Spotsylvania and Orange Counties. The opening battle of Lieutenant General Ulysses S. Grant’s sustained offensive against the Confederate Army of Northern Virginia was fought at the Wilderness.

On the morning of May 5th, the Union V Corps attacked Ewell’s Corps on the Orange Turnpike, while Confederate General A.P. Hill’s corps, during the afternoon, encountered Inspector General George Getty’s Division (VI Corps) and Major General Winfield Hancock’s II Corps on the Plank Road. Fighting was fierce but inconclusive as both sides attempted to maneuver in the dense woods. Darkness halted the fighting, and both sides rushed forward reinforcements.

At dawn on May 6th, General Hancock attacked along the Plank Road, driving Confederate General Hill’s Corps back in confusion. Confederate General James Longstreet’s Corps arrived in time to prevent the collapse of the Confederate right flank. At noon, a devastating Confederate flank attack in Hamilton’s Thicket sputtered out when his own men wounded general Longstreet. Union General Ambrose Burnsides’ IX Corps moved against the Confederate center but was repulsed. Union Generals James S. Wadsworth and Alexander Hays were killed. Confederate Generals John M. Jones, Micah Jenkins, and Leroy A. Stafford were killed. The battle was a tactical draw. General Ulysses S. Grant, however, did not retreat as had the other Union generals before him. On May 7th, the Federals advanced by the left flank toward the crossroads of Spotsylvania Courthouse. This large engagement, which included more than 160,000 troops, was inconclusive. Estimated casualties included 18,400 Union and 11,400 Confederate.

Battle of Spotsylvania, by Kurz & Allison, 1888

Spotsylvania Court House (May 8-21, 1864) – This offensive action by the Union, occurring in Spotsylvania County, was a series of skirmishes at Laurel Hill and Corbin’s Bridge on May 8; Ni River on May 9; Laurel Hill, Po River, and Bloody Angle on May 10; Salient or Bloody Angle on May 12-13; Piney Branch Church on May 15; Harrison House on May 18; and at the Harris Farm on May 19. After the Battle of Wilderness, Lieutenant General Ulysses S. Grant’s and General George C. Meade’s advance on Richmond by the left flank was stalled at the Spotsylvania Court House on May 8th. This two-week battle was a series of combats along the Spotsylvania front. The Union attack against the Bloody Angle at dawn, on May 12-13, captured nearly a division of Confederate General Robert E. Lee’s army and came near to cutting the Confederate army in half.

Confederate counterattacks plugged the gap, and fighting continued unabated for nearly 20 hours in what may well have been the most ferociously sustained combat of the Civil War. On May 19th, a Confederate attempt to turn the Union right flank at Harris Farm was beaten back with severe casualties. Union Generals John Sedgwick and James C. Rice were killed. Confederate generals Edward Johnson and George E. Steuart were captured, Generals Junius Daniel and Abner M. Perrin were mortally wounded. On May 21st, General Grant disengaged and continued his advance on Richmond. The inconclusive battle resulted in estimated casualties of 18,000 Union and 12,000 Confederate.

Yellow Tavern (May 11, 1864) – As the battle between General Ulysses S. Grant and Robert E. Lee raged at Spotsylvania Court House, the Union cavalry corps under Major General Philip Sheridan embarked on a cavalry raid against Richmond. After disrupting Lee’s road and rail communications, Sheridan’s cavalry expedition climaxed with the battle of Yellow Tavern in Henrico County on May 11th. The outnumbered Confederate cavalry was defeated, and Major General  J.E.B. Stuart was mortally wounded. General Sheridan continued south to threaten the Richmond defenses before joining Major General Benjamin Butler’s command at Bermuda Hundred. After refitting, General Sheridan rejoined the Army of the Potomac on May 25th for the march to the southeast and the crossing of the Pamunkey. The Union victory resulted in an estimated 800 total casualties.

Wilson’s Wharf (May 24, 1864) – Also called the Battle of Fort Pocahontas, this engagement took place at Charles City. On May 24th, Confederate Major General Fitzhugh Lee’s cavalry division of about 3,000 men attacked the Union supply depot at Wilson’s Wharf and was repulsed by two black regiments under Brigadier General Edward Wild’s 1,800 troops. The Union victor resulted in estimated total casualties of 165.

North Anna (May 23-26, 1864) – A series of battles at Telegraph Road Bridge and Jericho Mill on May 23rd; and Ox Ford, Quarles Mill, and Hanover Junction on May 24th, these engagements took place in Caroline and Hanover Counties. After the fighting at Spotsylvania Court House, Lieutenant General Ulysses S. Grant continued his Overland Offensive against General Robert E. Lee’s Army of Northern Virginia. He was brought up short on the North Anna River by Lee’s widely studied “hog snout line,” which forced Grant to divide his army into three parts to attack. On May 23, 1864, one of General A.P. Hill’s divisions assaulted the V Corps, which had crossed the river at Jericho Mill, resulting in bloody see-saw fighting. On the 24th, Union infantry was repulsed at Ox Ford but advanced to near the Doswell House on the Confederate right. General Lee hoped to strike an offensive blow, but he was ill, and the opportunity for defeating an isolated part of the Federal army passed. Once the threat of Lee’s position was revealed, Grant withdrew both wings of the army back across the North Anna River. Grant outflanked the position by moving downstream and continued his advance on Richmond. The inconclusive battle resulted in an estimated 4,000 total casualties.

Totopotomoy Creek/Bethesda Church (May 28-30, 1864) – Also known as Crumps Creek, Matadequin Creek, Shady Grove Road, and Hanover Town, these engagements took place in Hanover County. Operations along Totopotomoy Creek opened with cavalry combats at the Pamunkey River crossing at Dabney’s Ferry (Hanover Town) and at Crump’s Creek on May 27th. During the cavalry fight at Haw’s Shop on May 28th, Union and Confederate infantry arrived in the vicinity. The Confederates entrenched behind Totopotomoy Creek. On the 29th, the Union II, IX, and V Corps probed General Robert E. Lee’s position along the creek, while the VI Corps felt its way toward the Hanover Court House. Early on the 30th, the VI Corps turned south to come in on the far right flank of the Union line but bogged down in swampy Crump’s Creek without getting into position. The Union II Corps forced a crossing of Totopotomoy Creek in two places, capturing the first line of Confederate trenches, but the advance was stopped at the main line. The IX Corps maneuvered into position on the left of the II Corps, driving back Confederate pickets on the Shady Grove Road. In the meantime, the V Corps, moving near Bethesda Church on the far left flank of the Union army, was attacked by Early’s corps. The Federals were driven back to Shady Grove Road after heavy fighting. A sharpshooter killed confederate Brigadier General George Doles near Bethesda Church on June 2nd. The inconclusive battle resulted in an equal number of estimated casualties, with both the Union and the Confederate at 1,100.

Old Church (May 30, 1864) – Also taking place in Hanover County, this engagement was also known as the Battle of Matadequin Creek. While the armies were stalemated along the Totopotomoy Creek line, the Federal cavalry began probing east and south. Brigadier General Alfred Torbert’s Division attacked and defeated Confederate Brigadier General Matthew C. Butler’s Brigade near Old Church. Butler’s troopers were driven steadily back on the road to Old Cold Harbor, opening the door for Union General Philip Sheridan’s capture of the important crossroads the next day. The Union victory resulted in a total of about 900 casualties.