Demonstration on the Rapidan River (February 1864)

Union Major General Benjamin Butler, commanding the Army of the James in Fort Monroe, learned that General Robert E. Lee had detached a small portion of the Army of Northern Virginia to North Carolina. Convinced that Lee had sent a larger detachment than he actually did, Butler was convinced that an attack by the Army of the Potomac would force Lee to use troops from Richmond’s defenses to ward off the attack. Major General John Sedgwick, temporarily commanding the Army of the Potomac, protested that Lee had detached fewer men than Butler thought and that the local roads and weather were too poor for a winter attack. However, both Secretary of War Edwin M. Stanton and General-in-Chief Henry W. Halleck overruled his objections and ordered him to attack on February 6th.

Morton’s Ford (February 6, 1864) – This battle took place in Orange County and Culpeper County. To distract attention from a planned cavalry-infantry raid up the Peninsula on Richmond, the Federal army forced several Rapidan River crossings on February 6th. AII Corps division crossed at Morton’s Ford, the I Corps at Raccoon Ford, and the Union cavalry crossed at Robertson’s Ford. Ewell’s Corps resisted the crossings. Fighting was sporadic but most severe at Morton’s Ford. By February 7th, the attacks had stalled, and the Federals withdrew during the night. The inconclusive battle resulted in estimated total casualties of 723.

This campaign was an ambitious attempt by Union cavalrymen to assault the lightly defended Confederate capital at Richmond, Virginia, and free prisoners of war.

Mantapike Hill (March 2, 1864) – Also called the Battle of Walkerton, this engagement took place in King and Queen County. On February 28th, Union Brigadier General Judson Kilpatrick left his encampment at Stevensburg with 4,000 picked men to raid Richmond. Union Colonel Ulric Dahlgren, son of Rear Admiral John Dahlgren, commanded an advance force of 500 men. While the main body under Kilpatrick rode along the Virginia Central Railroad tearing up the track, Dahlgren rode south to the James River, hoping to cross over, penetrate Richmond’s defenses from the rear, and release Union prisoners at Belle Isle. General Kilpatrick reached Richmond’s outskirts on March 1st and skirmished before the city’s defenses, waiting for Colonel Dahlgren to rejoin the main column. However, Dahlgren was delayed, and Kilpatrick was forced to withdraw with the Confederate cavalry in pursuit. Confederate Major General Wade Hampton attacked Kilpatrick near Old Church on the 2nd, but the Federals found refuge with elements of Major General Benjamin Butler’s command at the New Kent Court House. In the meantime, Dahlgren’s men, unable to penetrate Richmond’s defenses, tried to escape pursuit by riding north of the city. Dahlgren’s command became separated, and on March 2nd, his detachment of about 100 men was ambushed by a detachment of the 9th Virginia Cavalry and Home Guards in King and Queen County near Walkerton. Colonel Ulric Dahlgren was killed, and most of his men captured. Papers found on Dahlgren’s body that ordered him to burn Richmond and assassinate President Jefferson Davis, and his cabinet caused a political furor. Southerners accused the North of initiating “a war of extermination.” Generals Meade and Kilpatrick, and President Lincoln all disavowed any knowledge of the Dahlgren Papers. The battle resulted in a Confederate victory, but the number of casualties is unknown.

Crook-Averell Raid on the Virginia & Tennessee Railroad (May 1864) 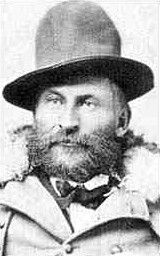 Brigadier General George Crook commanded the Union Army of West Virginia, made up of three brigades from the Division of the Kanawha. When Ulysses S. Grant launched his spring offensive of 1864, two Union armies marched towards Richmond, and a third moved into the Shenandoah Valley. General Crook’s troops were also involved in the offensive and march through the Appalachian Mountains into southwest Virginia. His objective was to destroy the Virginia & Tennessee Railroad, working in conjunction with General William W. Averell’s offensive, which had similar objectives. Brigadier General Albert G. Jenkins was in command of a few scattered Confederate units protecting the rail lines.

Cove Mountain (May 10, 1864) – Occurring in Wythe County, Brigadier General William Averell’s raiders encountered a brigade under Confederate General William “Grumble” Jones near Cove Mountain. After delaying the Union advance, the Confederates withdrew. The next day, Averell reached the New River Bridge on the Virginia & Tennessee Railroad, which he burned. The inconclusive battle resulted in an estimated 300 total casualties. 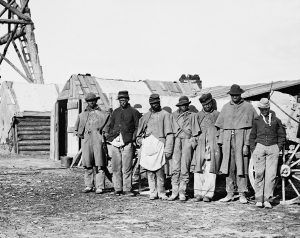 On March 12, 1864, Lieutenant General Ulysses S. Grant succeeded Major General Henry W. Halleck as General in Chief of the United States Armies. As March drew to a close, Grant decided to visit the Hampton Roads headquarters of the Department of Virginia and North Carolina to arrange an offensive campaign on Richmond. General Benjamin Butler would command this expedition, and his Army of the James would number more than 40,000 men.

Swift Creek (May 9, 1864) – Also known as the Battle of Arrowfield Church, this engagement occurred in Chesterfield County. On May 9th, Major General Benjamin Butler made a thrust toward Petersburg and was met by Confederate General Bushrod Johnson’s Division at Swift Creek. A premature Confederate attack at Arrowfield Church was driven back with heavy losses; but, Union forces did not follow up. After skirmishing, General Butler seemed content to tear up the railroad tracks and did not press the defenders. In conjunction with the advance to Swift Creek, five Federal gunboats steamed up the Appomattox River to bombard Fort Clifton, while Colonel Edward Hincks’ U.S. Colored Troops infantry division struggled through the marshy ground from the land side. The gunboats were quickly driven off, and the infantry attack was abandoned. The inconclusive battle resulted in an estimated 990 total casualties.

Chester Station (May 10, 1864) – Also taking place in Chesterfield County, elements of Confederate Major General Robert Ransom’s division conducted a reconnaissance-in-force against a portion of Major General Benjamin Butler’s army that was destroying the railroad at Chester Station. The Confederates attacked near the Winfree House, and the Federals retired to their Bermuda Hundred lines. The inconclusive battle resulted in total estimated casualties of 569.

Proctor’s Creek (May 12-16, 1864) – This four-day engagement, also known as the Battle of Drewry’s Bluff or Fort Darling, took place in Chesterfield County. After his repulse at Swift Creek and Fort Clifton on May 9th, Major General Benjamin Butler withdrew into his entrenchments at Bermuda Hundred. A Confederate army of 18,000 was patched together under General P.G.T. Beauregard’s command to confront Butler’s 30,000 troops. On May 12th, Butler moved north against the Confederate line at Drewry’s Bluff; but again adopted a defensive posture when gunboats did not support his attack. On the 13th, a Union column struck the Confederate line’s right flank at the Wooldridge House, carrying a line of works. General Butler remained cautious, however, giving Beauregard time to concentrate his forces. At dawn on May 16th, Confederate Major General Ransom’s Confederate division opened an attack on Butler’s right flank, routing many units. Subsequent attacks lost direction in the fog, but the Federals were disorganized and demoralized. After severe fighting, Butler extricated himself from battle, withdrawing again to his Bermuda Hundred Line. This battle stopped Butler’s offensive against Richmond. The Confederate victory resulted in estimated total casualties of 6,660.