Surviving Children of the Murdered Fix the Crime upon the Mormons, San Francisco Evening Bulletin, May 31, 1859

We have received, from our Salt Lake correspondent, a copy of the following thrilling statement, made by John Lynch, who accompanied Dr. Forney, the Utah Superintendent of Indian Affairs, to Mountain Meadows, on his recent trip in search of the surviving children of the Mountain Meadows Massacre. It is the clearest and most interesting narrative of facts, in connection with that terrible tragedy, which has yet been given:

About three months since, I started to go to Arizona. When I arrived at Nephi, I was overtaken by Dr. Forney, the Indian Superintendent, who was going to the Mountain Meadows for the thirteen surviving children of the Mountain Meadows Massacre. He told me he was doubtful about the Mormons he had with him, and asked me if I would assist him in case they deserted him. My party consisted of twenty-five men. I told him I would do so, and would return with him to Camp Floyd myself, if he could get no other assistance. When the doctor arrived at Beaver City, as was anticipated, the Mormons deserted without apprizing him of their intention — supposing that he would be unable to go further in his unassisted condition. I found him about 11 o’clock at night guarding his mules — told him to go to bed, and I would relieve him. I persuaded two of my party to assist me; and with their aid, drive his teams down to the Mountain Meadows, and gave up my intention of going further south. We pursued our course to Parowan. In this place, which is inhabited almost entirely by English and Danes — as are most of the southern settlements — the greatest hostility was evinced towards us. The people would hold no communication with our party, and spoke in the most insulting terms of the Americans, as they designate all who are not Mormons.

We continued our journey to the Meadows, passing through Painter Creek and Cedar City. The scene of the massacre is a broad, level meadow encompassed by a chain of hills. Upon careful inquiry, we learn that the emigrants had been harassed by bands of men, whom they supposed to be Indians, during their journey from Cedar City to the Meadows, and, at the latter place, made a corral of their wagons for defense. The corral was near a spring, which was the source of a small stream running through the plain. Words cannot describe the horrible picture which was here presented to us. Human skeletons, disjointed bones, ghastly skulls and the hair of women, were scattered in frightful profusion over a distance of two miles. Three mounds, partially exposing the remains of some of the murdered, indicated the careless attempt that had been made to bury the unfortunate victims. We remained two or three hours at the Meadows, and occupied ourselves in burying the uncovered remains of the massacred.

This done, we proceeded to the residence of the man Hamblin, a Mormon, in whose possession the children were. We found them in a most wretched condition, half-starved, half-naked, filthy, infested with vermin, and their eyes diseased from the cruel neglect to which they had been exposed. After three days at Santa Clara, where clothing was made for the children, we returned with Hamblin and ten of the children to Cedar City, and there obtained two more, and another at Painter Creek. When we passed through Beaver City, some of the Mormon men hooted at the children and called them the survivors of Sebastopol and Waterloo. Among the children are some who retain a very vivid impression of much connected with the massacre. A very intelligent little girl, named Becky Dunlap, pointed out to me at Santa Clara an Englishman named Tullis, whom she says she saw murder her father. She also states that Hamblin’s Indian boy killed her two sisters. Both she and a boy named Milum recognized dresses and a part of the jewelry belonging to their mothers, worn by the wives of John D. Lee, the Mormon Bishop of Harmony. The boy, Milum, also identified his father’s oxen, which are now owned by Lee. The two oldest boys told me that after they had been fighting for eight days, during four of which they were in the corral, from whence the water had been cut off, Bishop Haight, of Cedar City, came into the corral, and told the emigrants that the Indians did not want anything but their cattle and that if they would lay down their arms their lives would be spared. They did so and started to go to Santa Clara when they were attacked by a mixed party of whites and Indians, and all killed except the children. The boy, Miram stated, that after the massacre was over, he saw the Bishop of Coal Creek washing the paint from his face, which he had used to disguise himself as an Indian.

The man Hamblin seemed perfectly conversant with the circumstances of the massacre, and told me that at one time he had a good many of the cattle in his possession. A Mormon named Ira Hatch also told me that he found the only one man that escaped about one hundred miles from the Meadows, persuaded him to return with him, but when they had gone about 40 miles, the Indians murdered him in his presence.

There were 18 wagons, 820 head of cattle, and 143 persons in the train. It is supposed that there was also a great deal of money, as the Mormons say it was the richest train that ever crossed the plains. I believe Dr. Forney to be acquainted with all the circumstances I have narrated.

“The scene was one too horrible and sickening for language to describe. Human skeletons, disjointed  bones,  ghastly skulls and the hair of women were scattered in frightful profusion over a distance of two miles.” – Unknown, 1859 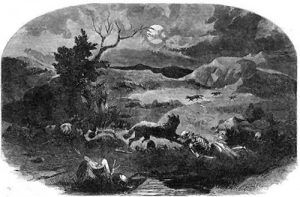 The story of so horrible a human butchery as that which occurred at the Mountain Meadows, Utah Territory, in the autumn of 1857, has by this time, no doubt, reached the States; but as no account which I have yet seen can in the slightest degree approximate to a description of the hideous truth, being myself now on the ground, and having an opportunity of communicating with some who were no doubt present on the occasion, I deem it proper to send you a plain and unvarnished statement of the affair as it actually occurred.

A train of Arkansas emigrants, with some few Missourians, said to number forty men, with their families, were on their way to California, through the Territory of Utah, and had reached a series of grassy valleys, by the Mormons called the Mountain Meadows, where they remained several days recruiting their animals. On the night of September 9, not suspecting any danger, as usual they quietly retired to rest, little dreaming of the dreadful fate awaiting and soon to overtake them. On the morning of the 10th, as, with their wives and families, they stood around their camp-fires passing the congratulations of the morning, they were suddenly fired upon from an ambush, and at the first discharge fifteen of the best men are said to have fallen dead or mortally wounded. To seek the shelter of their corral was but the work of a moment, but there they found but limited protection.

To enable you to appreciate fully the danger of their position I must give a brief description of the ground. The encampment, which consisted of a number of tents and a corral of forty wagons and ambulances, lay on the west bank of, and eight or ten yards distant from, a large spring in a deep ravine running southward; another ravine, also, branching from this, and facing the camp on the southwest; overlooking them on the northwest, and within rifle-shot, rises a large mound commanding the corral, upon which parapets of stone, with loopholes, have been built. Yet another ravine, larger and deeper, faces them on the east, which could be entered without exposure from the south and far end. Having crept into these shelters during the darkness of the night, the cowardly assailants fired upon their unsuspecting victims, thus making a beginning to the most brutal butchery ever perpetrated on this continent.