… The rumors of Mormon complicity with the Indians in the horrible massacre of the California emigrants and others, in passing through Utah, is confirmed by the report of Dr. Hurt, the Indian Agent, and others. Brigham Young’s boasted power and influence over the Indians since he has assumed his treasonable position towards the General Government, is used to its full extent against it. Persons passing to and from California through Utah, were often cautioned against the Indians by the Mormons. After being very inquisitive about the route they intended to take, they would say to them “Look out, the Indians are very bad on that road;” or, “If you ain’t careful, the Indians will clean you out before you get through.”

The significance of these remarks and a few incidents will serve to establish.

Early in February last, two gentlemen, John Peltro and John Tobin, the latter an apostate Mormon, in company with several others, came to the Indian Farm, on the Spanish Fork, on their way to California. While there, Brigham Young, junior, a son of the High Priest, and a young man named Taylor overtook them and remained overnight and all left in the morning. Peltro and his party started first and jocularly asked Young and Taylor if they were going their way. Young was heard to say, in an undertone: “We will overtake you soon enough.” As soon as they had left it was the talk among the Mormons that the Indians were very hostile on the route this party had taken. In anticipation of the facts, before Mr. Peltro and the party had time to reach the southern settlements, rumors were rife that they had all been cut off by the Indians.

The mail carrier of the California mail that came up soon after reported that the party was attacked in the night, while asleep on the Santa Clara River, by the Paiute Indians, who robbed them. John Tobin was severely wounded in the face; two others of the party were also wounded but not so seriously. It is a significant fact that all the balls found in the blankets of the sleeping party fitted the navy-size revolvers, and the Utah Indians pertinaciously assert that the Paiute had nothing to do with it. One of the party wrote an account of the affair to General Burr, at Salt Lake City, and forwarded it by the mail before referred to. When the mail reached Provo the letter was taken out and torn up by a Mormon, with the remark that the “old General should never see that mess of stuff.”

In the early part of September, G.W. Hancock, a Mormon merchant from Paysan, was at the Indian Farm, and said that an express had gone up to President Young with the intelligence that some California emigrants had been attacked by the Indians, and were entrenched behind their wagons, and to get his instructions what to do with the American. On the next day one of the Utah Indians, who had been gathering pine nuts west of the Sevier Lake, came in and said that he met a band of the Paiute, who told him that the Mormons had killed all the emigrants. Three days later another of the Utah’s came to the Farm and confirmed the report, saying that his brother Ammon, a chief, went to Iron County and tried to persuade the Indians to leave the road. The Bishop of the settlement ordered him away, telling him he had no business there. This Indian said that the Paiutes had been instigated by the Mormons. These reports of the massacre were soon confirmed by others, and the Indians persisted in saying “the Mormons had killed the Americans.” Dr. Hurt, wishing to learn more definitely what had occurred, the nature of the difficulties, and the instigators, sent a young Indian in whom he could confide, by a secret route to the Paiute. He met them at Ammon’s (Indian) village, in Beaver County. They acknowledged having participated in the massacre of the emigrants, but said the Mormons persuaded them to it; that about ten or eleven “sleeps” ago, J.D. Lee came to their village and told them that the Americans were bad people, and always killed Indians whenever they had a chance and that they killed the Mormons, who were the friends of the Indians, and prevailed on them to attack the emigrants (over 100 in number,) and promised that the Mormons would help them. The Paiute made three different attacks but were repulsed each time, when a number of Mormons, with Lee and the Bishop of Cedar City, went to the emigrant camp, pretending to be friends, and, under the pretext of settling the difficulties, persuaded them to lay down their arms, and permit the Indians to come inside their defenses, when the work of butchery commenced. To use the language of the young Indian, “they cut all their throats,” but a few of them started to run off, and the Paiute shot them. He also said there were some 15 or 16 small children, who were not killed, but were taken by the Bishop. Lee and the Bishop took all the stock, (over 1,000 head,) and a large amount of money.

A report also reached the Indian farm that the Snake Indians, under a chief named Little Soldier, had attacked an emigrant train in charge of a man named Squiers, from Missouri, He was encamped near Ogden. They drove off all his cattle, (nearly 500 head,) and all his mules and horses. The Utah Indians say that the Mormons took the stock themselves. Ben Simons, a Delaware Indian, who lives with the Snakes in Weber Valley, says that in the early part of September Dimick B. Huntington, (Brigham Young’s Indian interpreter) and Bishop West, of Ogden, came to the Snake village, and told the Indians that Brigham Young wished them to steal the emigrants’ cattle. He says the Snake chiefs consulted him about it. He advised them not to do it, which advice they concluded to follow — but Huntington and West insisted upon their stealing the cattle; the chiefs replied that they did not want them, and if the Mormons wanted them, they might get them themselves. Simons says he know the Mormons have got the stock. 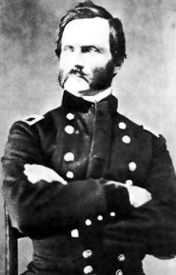 When I left Los Angeles, the 23rd of last month, General Clarke, commanding the Department of California, directed me to bury the bones of the victims of that terrible massacre which took place on this ground in September, 1857. The fact of this massacre of (in my opinion) at least 120 men, women and children, who were on their way from the state of Arkansas to California, has long been well known. I have endeavored to learn the circumstances attending it, and have the honor to submit the following as the result of my inquiries on this point:

Dr. Brewer, United States Army, whom I met with Captain Campbell’s command on the Santa Clara River on the 15th of this month, informed me that as he was going up the Platte River on the 11th of June, 1857, he passed a train of emigrants near O’Fallons Bluffs. The train was called “Perkin’s Train,” a man named Perkins, who had previously been to California, having charge of it as a conductor; that he afterward saw the train frequently; the last time he saw it, it was at Ash Hollow on the North Fork of the Platte.

The doctor says the train consisted of, say, 40 wagons; there were a few tents besides, which the emigrants used in addition to these wagons when they encamped. There seemed to be about 40 heads of families, many women, some unmarried, and many children. A doctor accompanied them. The train seemed to consist of respectable people, well to do in the world. They were well dressed, were quiet, orderly, genteel; had fine stock; had three carriages along, and other evidence which went to show that this was one of the finest trains that had been seen to cross the plains. It was so remarked upon by the officers who were with the doctor at that time. From reports afterward received, and comparing the dates with the probable rate of travel, he believed this was the identical train which was destroyed at Mountain Meadows.