The Butchery of a Train of Arkansans by Mormons and Indians 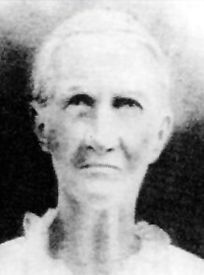 Almost forty years have rolled away since this country was horrified from Maine to California by the report of what is known in history as the Mountain Meadow Massacre. The details of this bloody crime, that for hellish atrocity has no parallel in our history, are familiar to very few of the present generation, although they were impressed indelibly upon the minds of our elders. To the majority of people the story of this massacre has almost become a myth buried in the obscurity of a forgotten past.

What, then, was the surprise of some of our townspeople a week or two ago when an elderly gentleman who was in the city trading, incidentally remarked that his wife was a survivor of the Mountain Meadows Massacre, and that he had rescued her from the Mormons while she was but an infant.

This old gentleman excited the curiosity of his auditors at once, being a very intelligent, interesting talker, but as his wife was waiting for him he did not have time to talk very much about the tragic drama in which his wife played such a thrilling part. In the course of his conversation, however, he said that his wife was the youngest of three sisters who survived the massacre, that he lived in Calhoun County and that he had brought his wife to this county on a visit to her eldest sister, Mrs. Rebecca Evans, who lived on a place belonging to Mrs. Lyle, about nine and one-half miles northeast of Monticello.

Learning that Mrs. Evans was about 7 years old at the time of the massacre, and thinking that she would be able to recall some particulars of that horrible butchery, in company with Dr. Tarrant of this city, we went out to call on her not long since. We found her living in an humble log house, with her husband and five children. They are merely tenants on Mrs. Lyle’s place. Time has dwelt somewhat roughly with Mrs. Evans and she does not look younger than her forty-six years imply.

She is, however, a very pleasant lady and talked freely of the massacre through which she passed years ago, although she cannot speak even now without a great deal of emotion of this butchery of her loved ones; and an expression of horror appears at times upon her face, such as she must have felt when she saw on that fateful September day 120 of her people tomahawked and pierced with arrows, crushed with stones and mutilated with bullets and knives, victims of Mormon fanaticism and hatred.

Mrs. Evans says this train of emigrants left what was then Carroll County, Arkansas, in the summer of 1857. In the train she had a father and mother, five sisters, one brother, an uncle and an aunt and ten or twelve cousins. She says her father and uncle were well off and had $30,000 in money with them, besides a large number of fine stock. There were about forty heads of families in this train when it entered Utah, most of them hailing from Arkansas. It is said to have been one of the finest trains that ever crossed the plains. They were making their way to California. Mrs. Evans says they received hostile treatment from the time they entered Utah.

Early in September, they came to the home of a prominent Mormon, Jacob Hamblin, on the northern slope of the Mountain Meadows. Here they were told that there was a large spring about four miles distant in the southern part of the Mountain Meadows. So the train, went on to the spring and encamped there for the night. After camping at this place for three days and nights, on the fourth day, in the morning just before light about sixty Mormons, disguised as Indians, and a number of Indians attacked the train. The Indians were ordered to stampede the cattle and drive them away from the train. They then commenced firing on the emigrants. The fire was returned by the emigrants, who had corralled their wagons. The Mormons and Indians had the train completely surrounded and they were cut off from the spring. For about eight days the siege lasted, the emigrants fighting like lions. The Mormons finding they could not whip them by fair fighting, decided to destroy them by treachery. Accordingly, John D. Lee, Haight and Higbee had their paint washed off, and dressing in their usual attire, took three wagons and drove down towards the emigrants’ corral as if they were traveling on their ordinary business. Mrs. Evans says her 8-year-old sister, Mary Dunlap, who was dressed in white, went out towards them and waved a white handkerchief in token of peace. The Mormons in the wagons waved one in reply and advanced to the corral. The emigrants, no Indians being in sight at this time, came out and walked [talked] with these leading Mormons for an hour or an hour and a half. The Mormons told the emigrants that the Indians were hostile, and that if they gave up their arms it would show the Indians that they did not want to fight. If the emigrants would do this the Mormons promised to pilot them back to the settlements.

Mrs. Evans, when asked if they did not suspect treachery, says that they did not, and if they did they were about famished from thirst, and were ready to accept almost any terms in order to get out of their distressing situation. The emigrants having agreed to these terms, delivered up their arms to the three Mormons with whom they had counseled. The women and children started back towards Hamblin’s house, followed by the men. The Mormons, with the arms, came along by the side of the men. Mrs. Evans says after they had proceeded about a mile on their way back to Hamblin’s house they came to a cluster of scrub oaks and sage bushes on both sides of the road. About this time Higbee, who was with them, gave the signal to fire by shooting off his pistol, when a volley poured in from each side and the butchering commenced. Who can picture the horrors of the awful scene? From every bush, demons of destruction leaped forth to revel in crime and in blood. The Mormons and Indians shot down in cold blood the defenseless men, women and children, then pierced them with bows and arrows, then cut their throats with knives. With savage whoops and yells, these devils pursued their victims in every direction. Innocent girls fell upon their knees and prayed for mercy, but their cries were unheeded. The massacre commenced about 5 o’clock in the evening. In one-half hour’s time, 120 men, women and children lay cold in death, horribly mutilated and disfigured.

Mrs. Evans says that she ran and hid behind a sage bush when the massacre began. Two of her older sisters were killed right near her, and were lying dead by her side. She heard her baby sister crying and ran to find her. She found her entwined in her mother’s arms, but that mother was cold in death. This sister, whose name was Sarah, and who was about a year old at this time, had been shot through her right arm, below the elbow, by a large ball, breaking both bones and cutting her arm half off. Seizing her sister in her arms, Mrs. Evans rushed back to the sage bush where she had been hiding. She remained here until she saw a white man, who proved to be Jacob Hamblin. She went up to him and begged him to save her and her little sisters. She says that Hamblin was the only white man that she saw who belonged to the massacring party. She remembers distinctly that Hamblin was dressed in a suit of green jeans. After the massacre was over, she saw quite a number of white men washing the paint from their faces.

Mrs. Evans says that she and her sister Louisa begged not to be separated from their baby sister, Sarah. Jacob Hamblin finally agreed to take the three sisters to his home. Just seventeen children survived this horrible massacre, the oldest of whom was not over 8 years of age. All of them were placed in one wagon, several of them being wounded, while the clothing of nearly all of them was bloody with the gore of their kindred. A son-in-law of John D. Lee drove the wagon to Hamblin’s house, where all the children were kept that night. What a pitiful sight these orphans, some of them moaning in pain, all of them bereft of parents and kindred, must have presented, as they were driven away from the scene of this horrible butchery!